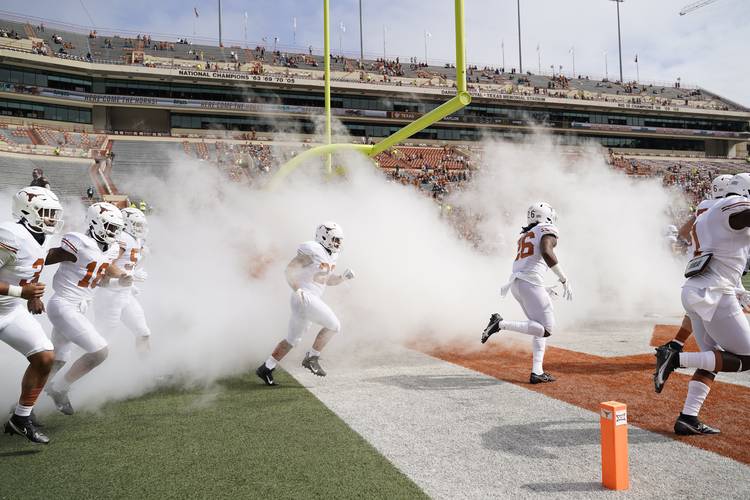 Texas players run onto the field before the win over Baylor two weeks ago at Royal-Memorial Stadium. The Longhorns are 4-2 overall with games remaining against West Virginia, Iowa State, Kansas and Kansas State. (Scott Wachter/USA Today)

Sorry about the tease. But then the Longhorns have been teasing college football for more than a decade, since the night that Colt McCoy suffered the worst pinched nerve in school history during the 2009 national championship game.

This latest injection of optimism on the heels of Saturday’s improbable, 41-34 comeback victory over Oklahoma State seems more authentic for a variety of reasons. And suddenly Texas (4-2, 3-2 Big 12) is not only nationally ranked at 22nd but also very relevant in the league standings with pretty much every other team in the conference besides Kansas.

Here’s why Tom Herman’s team could run the table in the last four games, starting at home Saturday against defensive-minded West Virginia, even though three of the Longhorns final opponents are a collective 11-4.

Texas just beat a top 10 team on the road. Texas won with big-time contributions from different players and generally without the customary heroics from just Sam Ehlinger. Texas won with a stout run defense that didn’t let Chuba Hubbard run wild. Texas now owns the tiebreaker with Oklahoma State. Texas won a big game when it had every opportunity to give in.

The players believe in themselves. That much is obvious. A team doesn’t keep coming back over and over as Texas has if it doesn’t have an inner core of confidence that it can call upon. Doesn’t matter if it’s three overtime games — two of which the Longhorns have won against Oklahoma State and Texas Tech — because those should steel them into believing no deficit is too big.

“I think people wrote us off too soon,” defensive tackle Ta’Quon Graham said Monday. “So I was angry about people writing us off. A bunch of stuff was being thrown at us. But I feel we’ve handled it well, and I feel we’re going to keep it rolling.”

Fans may still have some reservations about the Longhorns’ ability to run the table and return to the Big 12 championship game for the second time in three years. And it’d be hard to blame them. Herman’s now gone from a must-win game in Stillwater to, well, another must-game win in Austin. Who really knows what to expect over the next month?

The Longhorn faithful have gotten their hopes up before in the last decade only to have them dashed just as quickly. When a program has had just a single 10-win season since that Rose Bowl disappointment against Alabama, there will be a huge share of doubters.

Mack Brown, Texas’ best coach since Darrell Royal, ultimately tested and then lost the faithful fan base when he couldn’t solve the quarterback position and Texas forgot how to produce top offensive linemen. Charlie Strong body-surfed after beating Oklahoma. Then came Kansas. Along with 20 other losses in three years.

In 3 1/2 seasons, Tom Herman has stubbed his toe — and butted his head — more than a few times. Need we remind anyone of the Maryland debacles? He’ll beat Georgia and Oklahoma and Utah and look as if he’s turned the corner, but lose to TCU (often) and Iowa State and OU and others.

There are truly lots of reasons this could be different.

Ehlinger brings experience, swagger and a strong will, but may not have the biggest upside of any quarterback in the league. I’d say Spencer Rattler and Brock Purdy do. But Sam is Mr. Intangible as we’ve seen over and over even though he does seem beat up.

As West Virginia coach Neal Brown said Monday, “Texas is probably the most talented team in the league.” I’m not necessarily buying that. OU would win that beauty contest. But Texas does have talent. Definitely more than any of the four remaining teams on its schedule.

Let’s be real. Texas should have lost in Stillwater. Mike Gundy’s bunch has to find a way to close out a win when it has 530 yards of offense and goes up by 11 in the second half before Jamison’s 100-yard kickoff return and a foolish roughing-the-punter penalty helped doom the Cowboys.

But Texas didn’t lose, and each win becomes a building block for the next one.

“I don’t think there’s any reason we can’t win the rest of the games,” Ehlinger said Monday, “but I would have said that before the season too. We’ve stopped ourselves multiple times, and we just have to get better.”

It helps that there is no super team in the Big 12. Texas and Oklahoma could well be the last two standing.

When I asked Matt Wells if he thought parity has overtaken the conference, the Texas Tech coach said, “I did until Saturday.”

Tech was blown out 62-28 on its home turf by the Sooners, who benefited from the return of suspended difference-makers like defensive end Ronnie Perkins and running back Rhamondre Stevenson. Perkins had three tackles, two for losses, and Stevenson was OU’s leading rusher with 87 yards and three scores.

It shouldn’t surprise anyone if we see a Texas-OU rematch in Arlington in December. And as crazy as this year has been, would it not the the ultimate oddity if the Longhorns emerge as Big 12 champions and Herman is named the league’s coach of the year. Maybe 2020 will strike again.