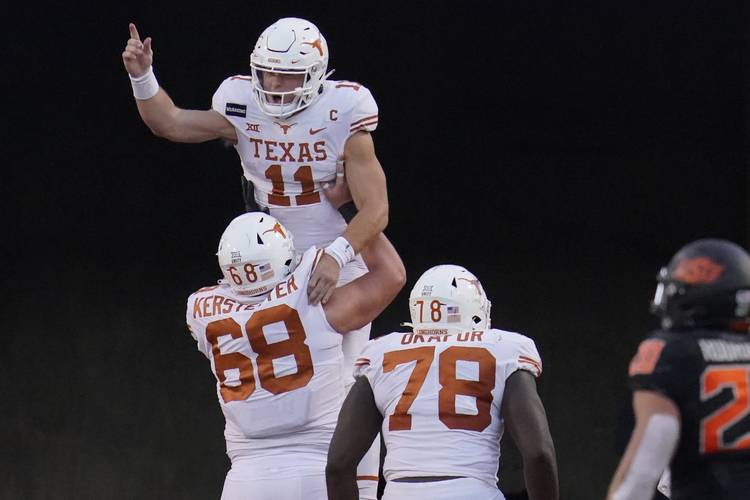 Remember that Texas opener? The Longhorns played the role of highly ranked bullies, pushing the Miners from pillar to post en route to a 59-3 win to the delight of Longhorn Nation? It was Texas at its best in all three phases against an opponent that offered little to no resistance.

The Horns were magnificent and showed off their preseason Heisman candidate quarterback Sam Ehlinger, their shiny new transfer wideouts, a loaded backfield and a rugged defense that made things awful for their overmatched opponent.

Then the real season started.

The blowout was an anomaly, as it turns out. Since that night, the Horns have gone 3-2. Ehlinger is no longer shopping for a Heisman tux and that defense, up until last week, had many more misses than hits.

To their credit, the No. 22 Horns play with great spirit most of the time — they have come back from large deficits —  but they play to the competition, a dangerous habit that makes Texas a prime candidate for an upset this week, especially when it’s favored by only a touchdown against West Virginia in a battle of 4-2 teams. The uneven performances aren’t a habit that a team can shed easily, especially one like Texas, which has been plagued by this malady for as long as one cares to remember.

“Honestly, it’s kind of frustrating because it seems we don’t play our best until our backs are against the wall,” Ehlinger said on Monday.  He pointed to the Horns ripping off two explosive plays early in Stillwater that erased a first-and-22 predicament and then later rallied to take the lead late before the Cowboys forced overtime.

“Why can’t we capture that and play that way all the time? That’s what we’ve got to figure out,” he said.

Before that, they were three minutes away from an embarrassing loss at Texas Tech before staging a miraculous comeback. They fumbled away a home win against double-digit underdog TCU and never showed a closing gear against an average Baylor team.

So how do you fix it? Hard to say, but it calls into question the mental preparation entering games that this team is expected to win. Is there a lack of focus? Is the hunger not there to work the teams they should work in the same way it’s there when they’re playing a marquee opponent like Oklahoma or Oklahoma State, which Texas knocked from the ranks of the unbeaten with its first road win of a ranked opponent in a decade?

Like Sammy said, the Horns have been at their best when pushed to the brink, whether it was the comeback in Lubbock or the one that forced overtime in Dallas, but the fans have wondered at other times why the Horns seem to start each game stuck in park.

“It’s going to click at some point to where it clicks earlier than later in certain games,” UT coach Tom Herman said on Tuesday. This is a team with a new defensive scheme, a new offensive scheme, a bunch of different new special team schemes with no spring practice, no summer, and a truncated training camp, and we’re learning on the fly, we keep getting better, our guys are excited to come to the building each and every day to get better.”

Yada yada yada. Herman knows that lots of teams install new schemes and bring in new coaches every year, but the really good ones overcome those obstacles and challenges. This year is a different animal for all involved, and Herman’s Horns have more advantages than some schools who have performed markedly better than Texas’ 29-17 mark during his tenure.

They should get it done by double-digits against the Mountaineers, but they won’t because it’s what they’re expected to do and this team doesn’t do well with expectations. They will win by a single score and West Virginia  will hang around and make things interesting because they have a veteran ballclub that won’t shriek at the sight of burnt orange uniforms and 15,000 fans at Royal-Memorial Stadium.

Past matchups in Austin have been track meets, like West Virginia’s 48-45 win in  2012 behind Geno Smith and super receivers Tavon Austin and Stedman Bailey or that 42-41 heartbreaker two years ago when Will Grier won it on a two-point conversion and a little ruckus commenced after Mountaineers players attempted to celebrate post-game on the midfield logo.

It all adds up to a nice matchup between similar teams. Don’t expect too many fireworks as far as explosive plays go because the Horns are fast resembling what they were early in Herman’s tenure: a station-to-station attack that’s more about moving the chains and less about home run plays.

West Virginia owns a physical defense — the Stills twins up front are the real deal — a quality running back in Leddie Brown and a talented quarterback Jarret Doege.

Head coach Neal Brown will come in here knowing the recipe to beat Texas is keep it close, protect the quarterback and hopefully hit that under-performing secondary with some big plays late.

The Horns would be best served to take their first possession and pretend they’re down 21-0 against the Sooners at the Cotton Bowl.

That should get them going.