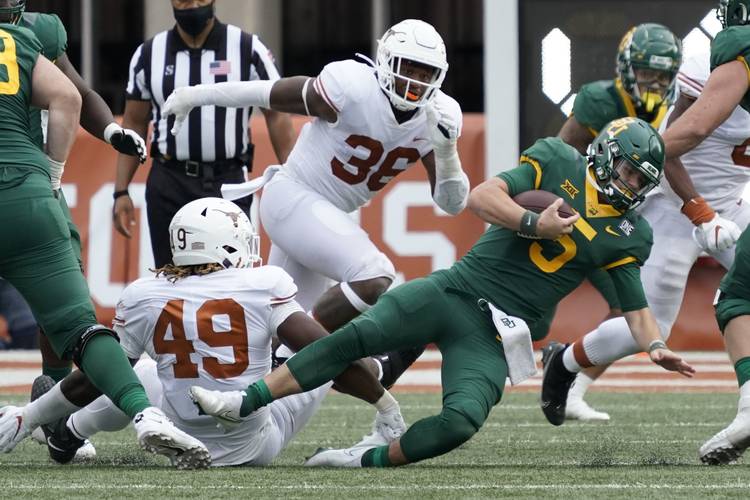 You don’t have to be some football savant to understand who’s playing well each Saturday. Just listen to the public address announcer or the TV broadcast. Whose names do they keep repeating?

These last two games, more Texas defensive linemen are getting called out in addition to Joseph Ossai.

Jacoby Jones with the stop.

Moro Ojomo with the tackle.

“I do know that those guys are definitely playing at a high level, or at least they have been the last couple weeks,” Texas coach Tom Herman said, “and they continue to play that way. We need ’em to.”

Ossai was huge against Oklahoma State. Digging deeper, the 22nd-ranked Longhorns got solid games from other defensive linemen for the second straight week. Their performance helped Texas (4-2, 3-2) stop the run, and it’ll be critical again Saturday against West Virginia.

“I think we’re steadily building confidence on that side of the ball,” Herman said.

Ossai grabbed all the headlines for his game-sealing sack of OSU’s Spencer Sanders. And rightfully so. Ossai had 12 tackles, six tackles for loss, three sacks, one forced fumble and one fumble recovery. He was the All-Everything defensive player of the week.

But Graham was rather terrific in Stillwater, too. He had five tackles, 3.5 tackles for loss, one sack and, of course, a big fumble return. “I think TQ probably had his best game as a Longhorn against Oklahoma State,” Herman said.

Jones, Sweat, Collins and Ojomo had three tackles each against the Cowboys as well. To no surprise, the Cowboys struggled on the ground after halftime. OSU averaged just 1.9 yards per rushing attempt after the break, and Chuba Hubbard finished with just 72 yards overall.

Why is this important? In the first four games, Texas was getting pressure on the quarterback but not getting the sack. The run defense was OK, but not great, sort of in the middle of the Big 12 pack. Running the ball is how TCU stayed in the game and pulled out a 33-31 victory. It’s also how Oklahoma hung in there, ultimately notching a four-overtime win.

Through the first five games, Texas had just seven sacks. Herman dismissed questions about that number, saying that his team had disrupted the quarterback more this season than “the last two years combined.”

Then, finally last week, Texas had a breakthrough. The Horns sacked Sanders five times, almost equaling their season-long output. Hitting the quarterback is simply not the same as sacking him.

“The D-line has been relentless since we’ve started in trying to improve their pass rush. It’s finally starting to pay off a little bit,” defensive coordinator Chris Ash said this week. “We were kind of pedestrian, so to speak there for a while, but it started to pick up and we need to continue to rush the passer and play at a high level on the D-line.”

Switching to the four-man was supposed to help. The last three seasons under then-coordinator Todd Orlando, Texas used a 3-3-5 stack formation with only three down linemen. That worked initially, but the Horns’ defensive pressure faded as time progressed and last year fourth-quarter collapses became a real problem.

Ash, who joined the staff this season, went back to a four-man front and moved Ossai to a new “jack” position, something of a linebacker and defensive end. All throughout high school, Ossai played with his hand on the ground, so that was something he was comfortable with. You could build an argument that he was playing out of position as a stand-up linebacker.

All appearances now indicate he’s at the right spot coming off the edge. This week, the comparisons to Von Miller have been thrown around as NFL types start to take notice.

But Ossai is merely a headliner for a group that appears to be figuring things out. Defensive linemen simply don’t have the statistics that quarterbacks, receivers or defensive backs do — you know, hard data to say this person is playing well or not.

Poona Ford and Chris Nelson, two former Texas defensive tackles, didn’t have a ton of stats, per se. But they were impact players. Keondre Coburn fits that description, too. He’s got 17 tackles, two tackles for loss and one pass breakup on the year. That’s not much compared to Ossai’s totals (46 tackles, 12.5 tackles for loss, four sacks).

Look at this week’s opponent. West Virginia’s Jarret Doege has the fourth-best quarterback rating in the Big 12. Watch how many times he has to throw on the move on Saturday. Does he get to stand in the pocket and have all day to throw? Or is he under duress? Watch running back Leddie Brown, the league’s second-best rusher in yards per game (115.7). Does he get four, five, six yards per clip? Or is it more like two, three or four yards at a time? That’s how you can gauge how well a defensive line is performing.

If the line is slowing or stopping the run, that puts offenses into longer third-down situations. Opponents are converting 36.6% of their third-down opportunities, which ranks seventh in the Big 12. As any Texas fan can attest, the Horns have been shooting themselves in the foot lately with penalties on third downs.

“That’s been a major, major emphasis for us,” Ash said. “We wanted to try to make offensive one dimensional and stop the run. And if we do that, the D-line helps us do that, then it’s going to open up more pass rush opportunities by getting teams and more third and long situations.”