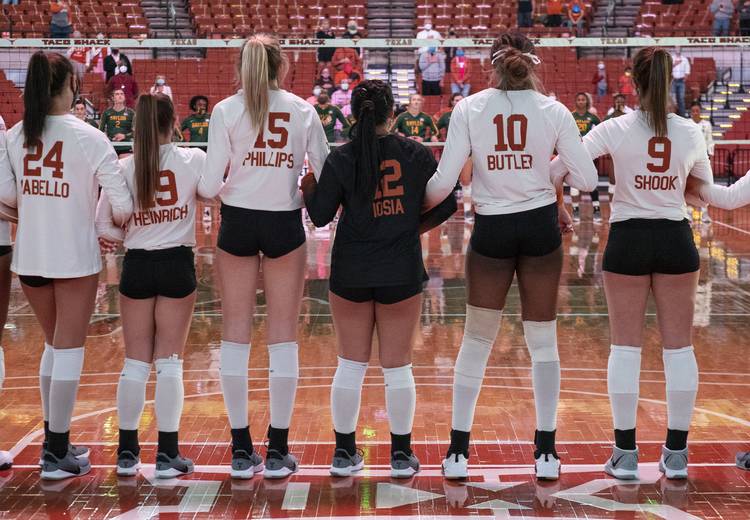 In the lineup for Texas, Giselle Vogel, (12), stands with the starting team before introductions against Baylor during Big 12 NCAA volleyball held at the University of Texas, in Austin, Texas, on Thursday, November 5, 2020. (Rodolfo Gonzalez For Statesman )

Texas’ Logan Eggleston spoke of what good friends she and Baylor’s Yossiana Pressley have become and never once considered Thursday night’s volleyball showdown a chance to even the score and maybe even show up last year’s national player of the year.

But surely the Longhorns were interested in some payback since both teams went 15-1, split their two meetings and finished as Big 12 co-champions in 2019 before Baylor advanced all the way to the national semifinals before falling to Wisconsin and Texas was eliminated at home by Louisville in the regional semifinals.

“It’s a healthy rivalry,” Texas middle blocker Asjia O’Neal said. “We were excited for them to go as far as they did last year. It’s exciting to have another powerhouse in our league and send a team to the Final Four.”

Is this any way to stoke the fires of one of the biggest growing battles in the nation, much less Central Texas? No hatred? No jealousy? Where’s Kim Mulkey when you need her to spice things up? Of course, it’s a healthier feud for Texas, which has never lost at home to Baylor in 45 matches.

Amidst all this goodwill as a backdrop, that didn’t stop the top-ranked Longhorns from teasing the third-ranked Bears by falling behind by two sets to none before roaring back and crushing Baylor’s spirit in a thrilling, five-set marathon, winning 15-9 in the fifth.

“Yeah, that was the goal,” said O’Neal, who was highly productive with 13 kills and four blocks.

So did she think Texas broke their will?

That could be determined when the two sides renew play with another 7 p.m. match Friday at the Erwin Center in this most unusual of seasons when the Big 12 is one of only four conferences that are playing before the actual NCAA tournament scheduled for next spring.

“It was a little bit funky out there,” UT head coach Jerritt Elliott said. “I kept telling the team all we need is a little bit of life. Let’s win Game 3 and we’ll roll this thing and get going.”

Thursday’s win did reward Texas (11-0) with a two-game lead in the Big 12 and a leg up for the automatic qualifier berth in a smaller, 48-team field next April.

If anything, Thursday’s tense battle revealed how little separation there might be between an unbeaten Texas and a third-ranked Baylor that fell to 11-2 but not before dealing Elliott’s team with a bunch of adversity in a season that’s had very little. His is an experienced junior/sophomore-dominated team accustomed to winning big while the Bears lost six seniors from a year ago.

When you’ve won all 10 of your previous matches — eight in sweeps and only one five-setter — a coach like Elliott almost has to conjure up some obstacles to challenge a team. But Baylor offered that in spades before Eggleston put Texas on her back with her 22 kills, 15 digs and two aces.

“The reality is you’ve got to be able to put yourself in situations that are stressful and you’ve got to learn how to win,” Elliott said. “That’s a really key component. But we were down 7-3 in Game 3 and we could have folded our tents and quit, but we stuck together.”

Not only that, but Texas was playing without Morgan O’Brien, the team’s starting libero who tested positive for the COVID-19 virus last week, but even that turned into a positive because a pair of freshmen in Nalani Iosia and Reilly Heinrich got chances and were very productive.

That underscored a key difference between these two teams because Texas has much more balance than Baylor, which relies heavily on Pressley, who began the night with 21 kills without an error.

It’d be something of a stretch to label Baylor a one-woman show even though the incredibly athletic and explosive senior dominated the first two sets and ended the evening with a .308 hitting percentage and 29 kills in 65 swings.

While it appeared she faded somewhat with help from few besides solid North Carolina transfer Lauren Harrison, Texas made her work extra hard, and she doesn’t have the luxury of taking any points off. The Longhorns, on the other hand, are paced b the powerful Eggleston, who just might press Pressley for those national honors this year. But she’s got more than a little help from O’Neal, Skylar Fields, Brionne Butler and Molly Phillips. Four Longhorns had double-digit kills in a very balanced attack.

So did Elliott think Pressley wore down?

“Well, she had 81 swings against last year and beat us,” an impressed Elliott said. “She’s used to that kind of workload.”

She had another 65 on Thursday, but as impressive as she was, Pressley and her teammates ultimately swung and missed. She’ll get a second try Friday night in yet another contest in this mutual-admiration society.

Eyes on Texas: Joseph Ossai has been a terror, but Horns’ other defensive linemen heating up, too