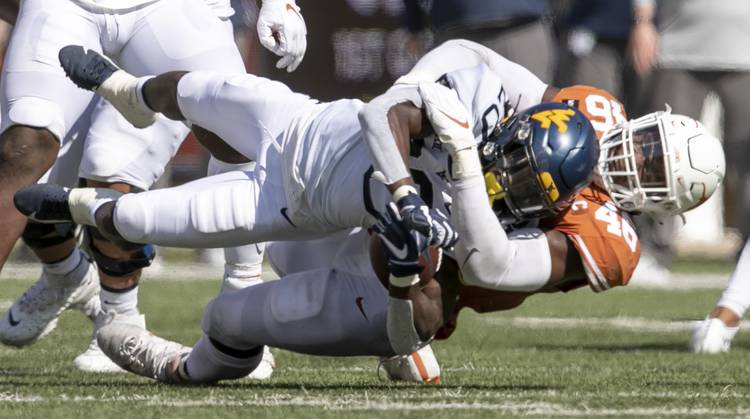 Are you sitting down?

Let me repeat that.

Allow that to marinate a bit to fully grasp the main reason Tom Herman’s much-maligned club now boasts a three-game winning streak with a 4-2 conference record that keeps Texas (5-2, 4-2) on pace to maybe land in Arlington for the Big 12 championship in December.

We’re not talking a goal-line stand in the closing moments or a pick-six that completely altered a game. We’re talking a start-to-finish, crunch-the-run, Tommy Nobis-would-be-proud kind of UT defense by golly that swallowed up West Virginia, allowing two field goals on four red-zone threats.

And it wasn’t defensive end Joseph Ossai and 10 other guys on the field at Royal-Memorial Stadium. Ossai wasn’t even the most noticeable defender out there as first-year defensive coordinator Chris Ash had an exemplary, inclusive game plan with a ton of contributors and should be commended.

Texas got the best game of nose tackle T’Vondre Sweat’s career as he replaced the injured Keondre Coburn, bear-hugged West Virginia’s talented running back Leddie Brown once or twice and batted a Jarret Doege third-down pass back in his face.

Texas linebackers were growing up literally in front of the 17,843 fans on hand Saturday. DeMarvion Overshown had a huge sack to force a field goal, and he and Juwan Mitchell combined for 17 tackles. Texas stuffed WVU’s rushing attack, limiting it to 43 yards with an incredible 1.7 yards a carry, and held the Mountaineers to 6-for-19 on third and fourth downs.

“Their defensive front is their strength,” Herman said, “and our front is our strength.”

Yes, Texas’ man-for-man coverage leaves a whole lot to be desired as Doege carved up the secondary for 317 yards after the Longhorns made the Mountaineers one-dimensional.

“We’ve got to get better in our man-for-man or stay away from it,” Herman said.

But big game-saving plays came from Chris Brown and B.J. Foster in the end zone, and Ash’s secondary didn’t draw a single pass interference call after a rash of them in Stillwater the week before. No one’s talking about missed tackles any more.

And that annoying trend of Longhorns penalties? They were reduced to a season-low of four flags for 45 yards. We’ll let you know the parade details here in town.

The Big 12 is playing better defense. Texas A&M is having a great year in large part because of a defense that’s ranked 46th nationally. Six Big 12 defenses rank better than the Aggies’.

West Virginia came in with the fourth-best defense in the nation, but Texas’ looked better. And that represents true progress.

On this day, both teams scored on their first possessions. Thereafter, only one more touchdown was scored when Sam Ehlinger threw a 33-yard strike to Jake Smith just after halftime of this defensive gem.

Without question, rock-solid defense is why the 22nd-ranked Longhorns held off a really good West Virginia team (4-3, 3-3) by that unfathomable 17-13 score, one that immediately sent auditors in search of a Big 12 manual to determine if such a low-scoring contest is even legal in this league.

It showed Texas still has a lot of fight left in it after losing back-to-back games to TCU and Oklahoma. These players could have easily tucked their tails and said adios to this season, but they stayed firm, stuck together and are now finding different ways to win games.

That’s what good teams do.

So how would Ehlinger rate this defense? “A-plus,” said the Texas quarterback, who had one of his few off days and didn’t even complete half of his 31 passes.

That type of superlative is rarely used to describe a defense that’s been boat-raced by Oklahoma before and had troubled stopping Texas Tech. Heck, just last season Texas survived the unthinkable when it escaped Kansas by a 50-48 margin.

But this is the kind of defensive performance a team can build upon.

Texas showed some grit when it ventured into Stillwater and improbably beat the nation’s sixth-ranked team with a defense that forced four turnovers and featured a huge performance out of Ossai, and then on a gorgeous Saturday held off a Mountaineers team that had won four of their last five in Austin but came up short.

The last time West Virginia arrived in Austin, it made off with a win when David Sills and Will Grier torched Texas and threw their Horns down. On Saturday, the Mountaineers returned to a  town where many of the Texas players, cheerleaders and band didn’t want to throw their Horns up. Such has been the topsy-turvy world of Longhorns football.

In the face of all that drama, Texas stood strong and together. The Longhorns didn’t have a single takeaway, but they played hard and suffocated the Mountaineers’ ground game.

Even better, his team has shown some.