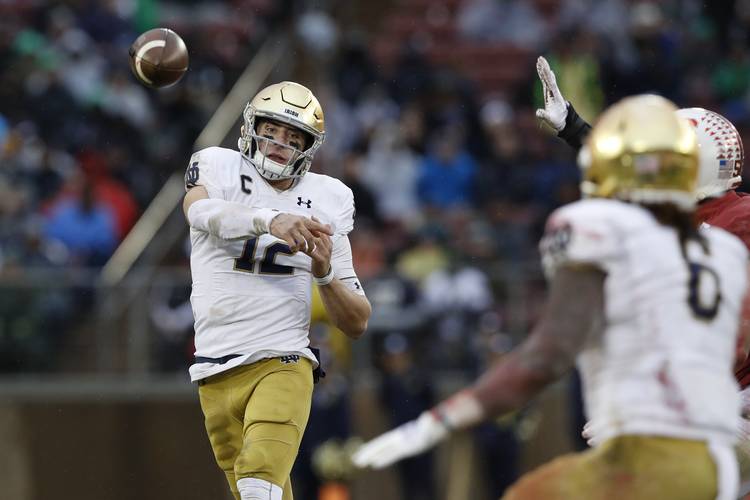 Notre Dame just threw one into the only normalcy this sport — this year, perhaps — has known when it held on to outlast No. 1-ranked and seemingly invincible Clemson 47-40 in double overtime in the game of the year.

Quite frankly, I didn’t know the Irish had this in them, but quarterback Ian Book showed up large and completed more big throws downfield than I thought he was capable of and got off several key scrambles. Yes, Tigers quarterback Trevor Lawrence wasn’t suited up and the game was in South Bend where we hope the field has been cleared by now of most of the 11,000 fans who converged to celebrate.

Can’t wait for the December rematch.

So what does this season’s biggest upset mean?

It jumbles the top of the Associated Press Top 25 poll, at least on my ballot.

Even though Brian Kelly’s team showed a ton of moxie and muscle, it didn’t vault them into the top spot on this vote, if only because the Irish have been inconsistent, especially offensively, this fall, compared to two other teams I have ahead of the Irish.

My ballot had idle Alabama at No. 1 a week ago, and the Crimson Tide team is still there.

Ohio State crushed Rutgers and deserves to remain No. 2. I bet the Buckeyes would be a touchdown favorite over the Irish.

So I flip-flopped Notre Dame and Clemson, putting the Irish at No. 3 and the Tigers at No. 4. The Tigers still look damn potent.

That’s difficult because three other teams are in the hunt for one of those top four spots, namely surging once-beaten Texas A&M (fifth), unbeaten BYU (sixth) and the best Group of Five representative Cincinnati (seventh).

The Aggies continue their impressive climb and still look like the clear second-best team in the SEC, but they still have their big loss to Bama on their resume as well as the key win over Florida.

Too many people are sleeping on the Cougars, who destroyed 21st-ranked Boise State on Friday.

Kansas State and Boise State fell out of my Top 25 while Texas rose to No. 22, USC came back to nip Arizona State at the end and show up at No. 23, and Liberty sneaks in at No. 24 after beating Virginia Tech with a last-second field goal. Florida jumped from my 11th-ranked team to eighth, and Georgia fell from No. 7 to No. 13.

Bohls: Big 12 defenses are out to shatter the league’s old offense-first stereotype