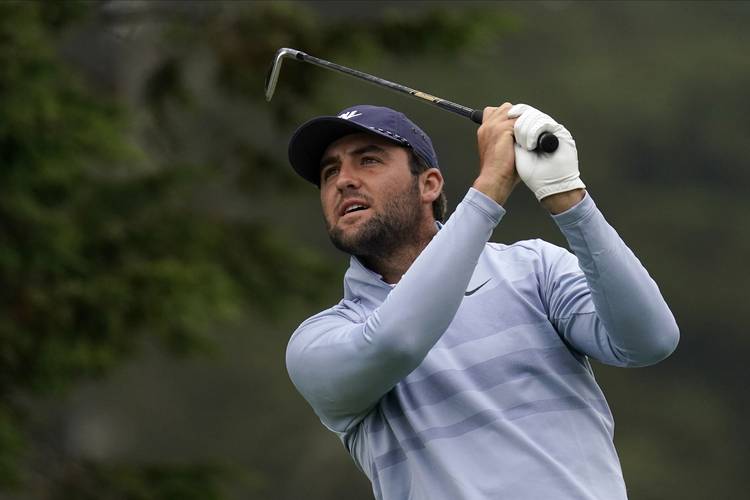 Scottie Scheffler, who watches his tee shot on the third hole during the final round of the PGA Championship in August, finished fourth at the PGA event and is competing in the Masters for the first time. [Jeff Chiu/The Associated Press]

Scottie Scheffler will step to the No. 10 tee box early Thursday morning at storied Augusta National and will get a glimpse of the future.

His own future, and golf’s as well.

Not immediately maybe, but the 24-year-old former Texas All-American is near the front of this bold, new wave that is, if not taking over the sport, at least making its presence felt.

And that’s the wonderful thing about golf, how young lions can compete on equal footing with the old champions.

Scheffler may not win this year’s Masters, which begins Thursday after being moved from April because of the pandemic, but it won’t shock anyone if he’s in the mix through Sunday. And the same goes for Collin Morikawa. And Matthew Wolff.

Morikawa, out of Cal, won the PGA Championship. Wolff, a champion from Oklahoma State, was the U.S. Open runner-up.

Other young lions like Cameron Champ of Texas A&M and Vanderbilt’s John Augenstein and Ireland’s James Sugrue and 20-year-old Yuxin Lin and Argentina teen-ager Abel Gallagos at 17 will fight the nerves and the pine needles for the first time ever at Augusta.

But even though 26 of the 92 in the field will be competing in the tournament for the first time, all know they belong, they earned their ticket there and they’ve got game.

The same goes for Scheffler in spades.

“Obviously, the goal is to come here to win,” Scheffler said Monday. “I didn’t just come here to show up and have fun. It’s a golf tournament. I’m here to do the best I can and hopefully win, and that’s how I’ll approach everything from here.”

Scheffler’s yet to win on the Tour, but he’s got seven top-10 finishes, played with eventual winner Dustin Johnson in the final round of the PGA Championship and finished in a tie for fourth, and was named rookie of the year after being the Korn Ferry rookie of the year the season before.

“Obviously, he’s doing something right,” said Texas’ John Fields, Scheffler’s college coach. “What’s truly significant about Scottie is his ability around the green. His chipping, his putting, his wedges. I’ve not been around that many guys who are extraordinary around the green. Scottie and Jordan (Spieth) have those abilities. Scottie has a gift. All those things taken as a whole put Scottie in a really sweet spot for maybe having some serious success at Augusta.”

Scheffler may not get his first victory on the Tour at challenging Augusta National of all places either, but here’s betting he will in his career.

He’s got the moxie, the game, the length, the poise and, most of all, the belief typical for a golfer ranked 30th in the world.

The 6-3, 200-pound Scheffler, who joins Longhorns Jordan Spieth and Dylan Frittelli in the competition, hits the ball high and has considerable distance, a big asset at Augusta. He missed the U.S. Open after testing positive for COVID-19 but tied for 32nd at last week’s Houston Open with an opening 67 and a closing 65.

“If Scottie keeps playing with the confidence he has shown through the summer and fall,” two-time Masters champion Ben Crenshaw said Tuesday, “he could be in the mix.”

And Scheffler’s been on this historic course before.

Scheffler and the Longhorns first played the demanding course with its nightmarish, undulating greens and uneven lies and rich tradition in both 2016 and 2017. The entire Texas team was invited to play with a club member, who will remain anonymous.

“I can’t tell you who it is,” Fields said. “We had an extraordinary opportunity to play it, let’s leave it at that. It’s a very private thing.”

Thanks to an NCAA rule change a decade ago, Fields said, colleges were allowed to play practice rounds on courses outside their own states’ borders. Before the change, schools like Georgia, Georgia Tech and others could wrangle invites to play Augusta, an enormous recruiting advantage.

“You’ll be surprised how many college golf teams get an invitation from a member,” Fields said. “We were there last year, and that same day Texas Tech was on the property, Notre Dame was there. There are individuals who have the opportunity in a really neat way who have alumni who can make that happen.

“He’s as familiar as anybody as a rookie ever because he’s played it multiple times. So he’ll see the golf course differently. I would tell you he’ll play extremely well there.”

Scheffler has at least enough familiarity with the course with its steep hills and slick greens to be able to attack it with confidence. And that should give him an advantage over many of the other two dozen or so who are making their debuts at Augusta National. How much it will help him compete against the veterans remains to be seen.

“I think my game suits the major championship courses a little better than it suits the regular Tour courses, especially a U.S. Open type golf course where the greens are really firm and fast and the fairways are really tight,” he said. “I think the approach on this golf course will suit my game as well, just being able to hit it high and shape the ball different ways is something that’s really important out here.”

He’s got the distance to allow him to play shorter clubs into greens on the par-5 holes and the iron play to get the ball close. Of course, the overseed with rye grass may not have overtaken all the Bermuda, and wet weather could complicate play even more.

“They may have lean, muddy lies,” Fields said, “and that means you have to be really precise and have nerves of steel. And Scottie does.”

Eyes on Texas: Turn around, look for the ball! Chris Ash explains what he’s teaching these DBs