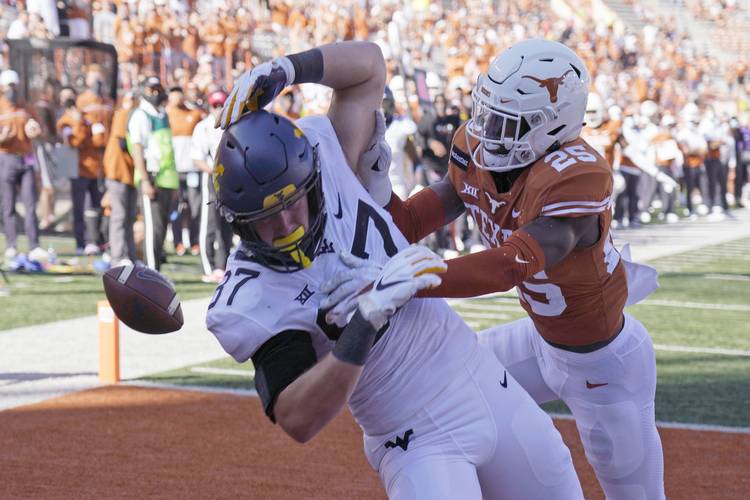 If you’ve been watching TV the last few weeks, you’ve probably been screaming. At the Texas defensive backs, that is.

Turn your head around! Look for the ball!

Look, nobody ever said playing defense in the pass-happy Big 12 was easy. To those playing cornerback in this league, heaven help you. Then again, even the good Lord almighty can only do so much against Tylan Wallace.

Oklahoma State’s sensational receiver had 11 catches for 187 yards and two touchdowns against Texas on Halloween. The Longhorns were called for pass interference a season-high three times. As Wallace was running wild, and the ball came zipping through the air, you just wanted to shout out to D’Shawn Jamison or Jalen Green. Turn your head around! Look for the ball!

Defensive coordinator Chris Ash recently explained what the coaches are teaching about using their hands and, yes, getting your head around. The Horns have the second-worst pass defense in the Big 12, so something must be getting lost in translation.

To be fair, pass defense is not solely a judgement on the defensive backs. Texas is seventh in sacks this season, averaging two per game. This defensive line is getting better with each passing week. It’s possible there could be considerable pressure exerted in UT’s final three regular season games.

But pass defense does expose weak spots, especially among those out on that island.

“There’s no coaching that’s going on that says we don’t look for the ball or we just play the hands,” Ash said. “It’s all based off the defensive backs’ positioning on the wide receiver within the play.”

“Play the hands” is a phrase Ash has used numerous times this season. What exactly does that mean?

“You never look back for the ball when you don’t have vertical control of the receiver,” Ash said. “If I’m not on top of them, and I look back, what do I naturally do? I slow down. And when I slow down, what naturally happens? I’ve lost the receiver and separation occurs.

“If I’m on top of the guy, and I’m in a good position to defend the receiver, then I’m going to turn and locate the ball,” Ash said.

This explains why the Longhorns may not be turning their head around at all times. If you’re running step for step with a receiver, sure, Ash would approve turning and looking for the ball. What he’s saying is that if there’s any separation, like perhaps the receiver has a step, then it becomes about watching a receiver’s hands.

Two of the biggest defensive plays against West Virginia were solid examples. Both came on fourth down as the Mountaineers threw into the end zone.

On fourth-and-1 from the Texas 16-yard line, quarterback Jarret Doege lofted a ball for Mike O’Laughlin, who had separation from safety B.J. Foster. Instead of conceding, Foster got his hands up into O’Laughlin’s face and broke up the play. Judging from replays, Foster never appeared to turn and look for the ball. Still, the pass was incomplete and a turnover on downs.

On WVU’s next drive, the Mountaineers went for it again. This time, on fourth-and-1 from the Texas 8, Doege faked a handoff to Leddie Brown and went looking over the middle. UT’s Chris Brown broke up a bullet intended for Ali Jennings in the end zone. Another turnover on downs.

Should officials have called pass interference on Brown? West Virginia fans would say absolutely. Frankly, it looked like a 50-50 decision, and officials are going to let them play in that situation. Credit Brown for a hard-won individual battle, one worthy of a Flex Alert.

Texas loaded the line of scrimmage, and coach Tom Herman said after the game it “forced them to be one-dimensional. Our secondary did a great job covering them.”

Play the hands or play the ball. Ultimately it comes down to each defender relying on his own athleticism in the heat of the moment.

Think back to Jalen Green’s interception against Oklahoma State. He was with the receiver step for step, had time to turn and look for the ball and made the interception. D’Shawn Jamison was trailing the receiver, tried to use his hands and was called for pass interference.

It’s not that Green is good or Jamison is not; they’re both athletic and talented. This is hard stuff. That’s why you always hear coaches talk about “moving on to the next play.” Forget that one, it’s over. What are you going to do on the next one?

“There are different types of finishes; there’s not just one finish that you coach or teach,” Ash said. “And it’s not a new concept. It’s pretty universal, that you either turn and look for the ball or you play the hands of the receiver based on your body position with the receiver.”

Bohls: Texas’ Scottie Scheffler’s been there, done that, but wants to win this Masters

Bohls: Scottie Scheffler off to a strong Masters start in debut, but hungers for more