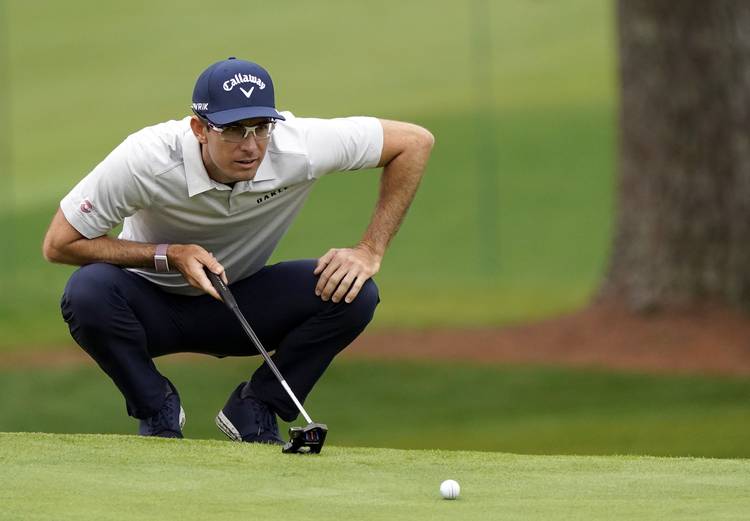 Nov 13, 2020; Augusta, Georgia, USA; Dylan Frittelli looks over his putt on the 7th green during the continuation of the first round of The Masters golf tournament at Augusta National GC. Mandatory Credit: Rob Schumacher-USA TODAY Sports

After all, how many chances do you get to try to win the Masters?

“It’s just a golf tournament, isn’t it?” Frittelli said nonchalantly after a round of five birdies for a bogey-less 67 and total score of 11 under par to remain in serious contention.

“There’s going to be a few times in your career that you’ll be in contention,” Frittelli said, “so it’s pointless laying up and trying to play for a top five or something.”

Frittelli has won just a single PGA Tour event in his career and ranks a relatively distant 100th in the world, but the 30-year-old South African will awaken Sunday morning with a chance to win the biggest golf tournament there is.

Playing in just his second Masters, the former Texas All-American once rose to second on the leaderboard late Saturday before Dustin Johnson, the No. 1 ranked player in the world, pulled away from the field. Johnson shot a torrid 65 for the second time in three rounds for a Masters-record 16-under-par score of 200 and a four-shot lead over three players, none of whom has won a major, and five ahead of Frittelli.

Nor has Frittelli, who has won once on the Tour and once in college although he sank the clinching putt to bring Texas its third national title. He will tee off at 8:18 Sunday morning Texas time.

Before now, his friendship with former teammate Jordan Spieth on the 2012 national championship team was about as close as he’s come to a Masters championship. But he’s relied on steady nerves, a strong new driver that has given him more club speed and length and a businesslike game plan to shoot a 5-under 67 in Saturday’s flawless third round.

He’s been the best Longhorn ex at this tournament in his second try although Tour rookie of the year Scottie Scheffler has scrambled to stay relevant. He had back-to-back bogeys on Nos. 6 and 7 after three-putting the first and missing the fairway on the second. He rallied with a four-foot birdie putt on No. 14, but a bogey on No. 17 left him with a third-round score of 72 to sit in a tie for 20th.

Spieth’s struggles continued with a 1-over-par 73 in third round after completing the darkness-suspended second round with a 70 for even, just making the cut. The 2015 Masters champion birdied the two par-5 holes on the back nine, but that couldn’t help his game.

In a tie for 52nd, he appears doomed for his worst Masters performance ever in his seventh crack after finishing in the top two his first three tries at Augusta National.

Frittelli, on the other hand, is killing the par-5 holes with a cumulative 9-under par in 12 tries. His 15 birdies rank seventh in the field, and at 319 yards, he’s driven it farther than all but Bryson DeChambeau and Rory McIlroy.

Frittelli qualified for the 84th Masters by winning the John Deere Classic in 2019 but hasn’t played well since golf’s restart, finishing in the Top 10 just once in his last 22 events.

“I just had clarity,” Frittelli said. “I think my mind was pretty clear. Felt confident, calm. Didn’t really feel any nerves. That’s something I actively work on.”

Golden: What happens when a Longhorn doesn’t make the NFL? Real life, and it isn’t always easy

Bohls: Irish inching up while Gators, Bearcats making statements on my Top 25 ballot