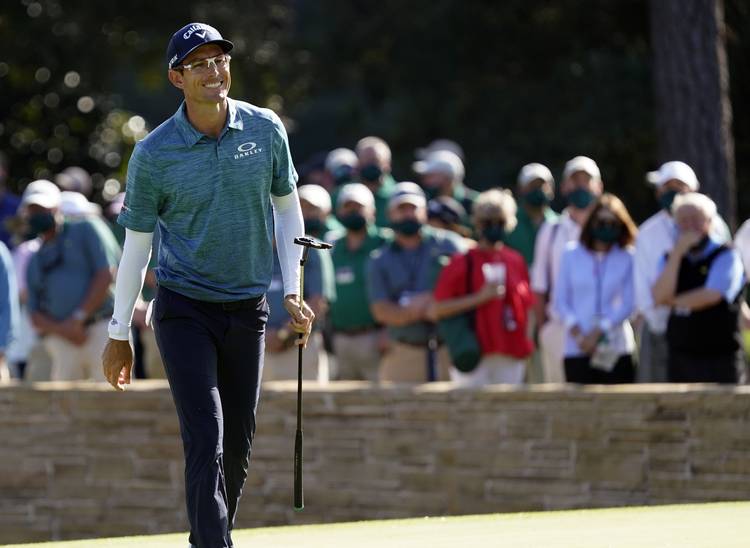 Dylan Frittelli reacts to his missed putt on the 15th green during the final round of The Masters golf tournament at Augusta National on Sunday. He finished in a tie for 11th place with Rory McIlroy. (Michael Madrid/USA Today)

The 84th Masters that unfolded on Sunday really was a Masters like no other.

No enthralled patrons in attendance. No roars cascading through the tall pines. No wind to speak of, and no sign of the normally slick, lightning-fast greens.

Oh, and no drama.

One social-media pundit even labeled it the Mehsters.

Just don’t tell that to Dustin Johnson, who treated the biggest golf tournament in the world like his own private Dustin Johnson Invitational and overpowered Augusta National. The No. 1-ranked player in the world won with the lowest score in Masters history at a staggering 20-under 268, winning by five strokes and eclipsing by two shots the previous best scores by Tiger Woods and Jordan Spieth.

What Johnson also didn’t have in this tournament shifted five months later in the calendar by the pandemic was a horde of past Masters champions or major championship winners breathing down his neck in hot pursuit.

But maybe some future ones.

Like 27-year-old Australian Cameron Smith, who somehow became the first golfer in the history of the Masters to post four rounds in the 60s and still not be fitted for a green jacket. Like 22-year-old South Korean sensation Sungjae Im, who ranks 25th in the world and tied Smith for the runner-up spot at 15-under.

They all went from Masters no names to new names. Frittelli’s no longer Dylan who.

Spieth’s former teammate on Texas’ 2012 national champion may not be quite ready to inherit the mantle of best current Longhorns golfer, but he may have started to close the gap on the three-time major champion, if this weekend was any indication.

Playing in just his second Masters, Frittelli finished at 11-under par for a fifth-place tie with Rory McIlroy. Sure, he has a long ways to go to match even a struggling Spieth, who had his worst performance ever at a place where he always shines.

But this was Frittelli’s grandest moment on the biggest stage.

“It was awesome,” Frittelli said after his final-round 72 with no fatal mistakes but few serious highlights. “Obviously it’s a big step for me to finish top 10 in a major. It’s my first time and first time making the cut here as well, so lots of first-time events that I’m proud of and something that I can build on now heading into next year.”

Spieth, searching for his first win of any kind since Birkdale in 2017, was at even par Sunday with six birdies and six bogeys to wind up at 1-over par overall and a tie for 46th after a 2015 victory here and two runner-up finishes. His previous low was a tie for 21st. At least he kept it out of the water on No. 12.

Frittelli, on the other hand, was playing in just his 10th major after missing the cut at Augusta in 2018.

Fellow Longhorn Scottie Scheffler, the PGA Tour rookie of the year and a likely future champion, made his Masters debut a successful one, with a 6-under score and tie for 19th place.

Frittelli didn’t so much rise out of obscurity as he announced his coming-out party in a big way with added length and renewed confidence. He was 8-under on the par-5 holes the first rounds, but just 1-over there Sunday.

Needless to say, he improved drastically on his 100th world ranking.

He’s won four times overseas but just a single event in his eight-year PGA Tour career, taking only the John Deere Classic in 2019, as compared to Johnson’s 27 victories and second major championship. But there could well be other victories on the horizon for this former Texas All-American.

Incredibly, the carefree 30-year-old South African had only a top 11 finish in his last five starts with two missed cuts and a tie for 69th and missed the cut at the Houston Open the week before the Masters.

But the lean, lanky golfer went to Augusta with a solid gameplan and played unbelievably steady golf, scoring 18 birdies to rank 10th and driving the ball farther than anyone except Bryson DeChambeau at 315 yards.

He played bogey-free golf during his 67 on Saturday and went 23 consecutive holes without a blemish on his card until he found himself in a fairway bunker on No. 5 Sunday and couldn’t scramble for a par.

By finishing in the top 12, he secured a return ticket to next year’s Masters, which is just five months away, and won a piece of crystal for his eagle on the 13th on Thursday as well as a tidy paycheck of $460,000.

Maybe the Bryson DeChambeaus and Brooks Koepkas faded away and the Justin Thomases and Rory McIlroys couldn’t hang close enough to put any pressure on Johnson, but the lesser-known names like Frittelli, Smith and Im played solid enough golf to make him earn it.

And earn plenty for themselves.

“At the start of the week, if I shot double-digits under par, if you would have offered that to me,” Frittelli said, “I would have taken it for sure.”

Bohls: Irish inching up while Gators, Bearcats making statements on my Top 25 ballot