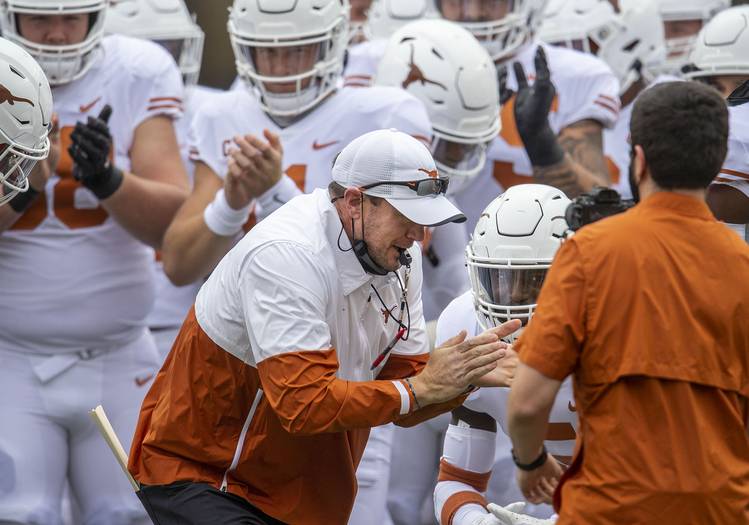 “Got any weekend plans?” the Texas radio broadcaster asked.

“No!” the Longhorns football coach said with a laugh. “I don’t.”

Not anymore, at least. Not after Kansas postponed Saturday’s game against 22nd-ranked Texas because of COVID-19. The game has been rescheduled for Dec. 12, and now the Horns have back-to-back weekends off.

Frankly, Texas is lucky it’s gotten this far into the season before COVID-19 reared its ugly head. The Horns are 5-2 and have won three straight games. They have a clear path to the Big 12 championship game. If Texas wins its final three games, Herman’s club will be in Arlington on Dec. 19.

Now, the Horns must juggle their schedule. Texas must start looking toward next Friday’s game against No. 17 Iowa State at Royal-Memorial Stadium.

Herman said the Horns will have a short “introductory” practice for Iowa State on Friday. Saturday will be like a Tuesday practice. Players will be off the field Sunday, then back at it Monday, Tuesday and lighter on Wednesday. Iowa State (5-2, 5-1) hosts Kansas State on Saturday in Ames.

“We’ve been lucky and good,” Herman said. “Up until this point, none of our opponents have really had any issues, prior to the Kansas game. And we’ve been good. Our players deserve all the credit. I mean this is hard — really, really hard with what we ask these guys to do each and every day. And they have done so without complaint.

“We tested them again yesterday,” Herman continued. “Wednesdays are the big ones for us, the PCR (test), you know, the ones that go way up there. And again, zero positives. So we’re doing our part. I say ‘we.’ I mean, as a coach, we have very little to do with it. It’s the players that are keeping themselves safe and healthy and all of that.”

Herman acknowledged that being tested three times a week has been a mental grind. The Big 12 decided as a league that schools would test three times per week. All athletes who test positive must follow a quarantine protocol.

“Kids are very adaptable for sure, and very resilient, but this has affected them,” Herman said. “Mental health issues are at an all-time high, even on our team. We’re playing well, we’re winning game and we’ve stayed relatively healthy. You know, there’s a ton of guys that are dealing with a lot of stuff.

“I mean, it’s just, the world is nervous, and you can see just the raw nerves on everybody,” he added. “You’re very cautious with your words and your demeanor, because it’s a heightened sense of sensitivity right now with our players.”

Can anyone really blame the athletes for having Covid fatigue? Everybody wants to play, but they don’t want to live in a bubble, either. Good luck telling an 18-year-old they can’t attend college parties, hang out with their friends or go out to eat.

Wear a mask! Wash your hands! Yeah, right, Boomer. I have yet to meet a teenager who doesn’t think he or she isn’t bullet-proof.

But the Big 12 protocols are scary enough to keep athletes on the straight and narrow. Who wants to miss possibly two games just because they went to a party? Or had friends over to the dorm? Or spent time with a significant other?

And yet, teams are having to postpone or cancel games all over the country. Fifteen games were moved last week, and as of Thursday, another 15 games have been altered, including Texas-Kansas.

Over on campus, UT officials announced earlier this year that Thanksgiving would mark the end of the fall semester. They didn’t want students going home for the holidays, then coming back to campus for two to three weeks to finish up. It won’t be that shocking if K-12 school systems make a similar decision to go online after Thanksgiving to finish out the fall.

Basketball season is likely going to see all sorts of scheduling chaos. The Texas women and men’s teams are scheduled to start their seasons Wednesday at the Erwin Center. The women play SMU at 1 p.m.; the men host UT-Rio Grande Valley at 7.

But take things day-by-day as far as basketball goes. The Longhorns are expected to allow minimal fan attendance at home games, most likely only season ticket-holders, a source said. That means about 3,200 for men’s games and 1,500 for women’s games. The school has yet to make a formal announcement.

For his part, Herman said Monday this season definitely counts. And it should. If the league is going to stage a championship game, then Texas should expect to be in it. If the Horns wind up winning the championship, you can be absolutely certain they’ll hang a 2020 sign on the stadium façade.

“Did any of us want to play a game on Dec. 12? No,” Herman said Thursday. “But now this provides us an extra week to get healthy, to get rested, it gives us a couple extra days to get ready for our next opponent. The players should see opportunity in every obstacle. I think our kids have embraced that.”

Getting through the next several weeks will be a massive test, though.