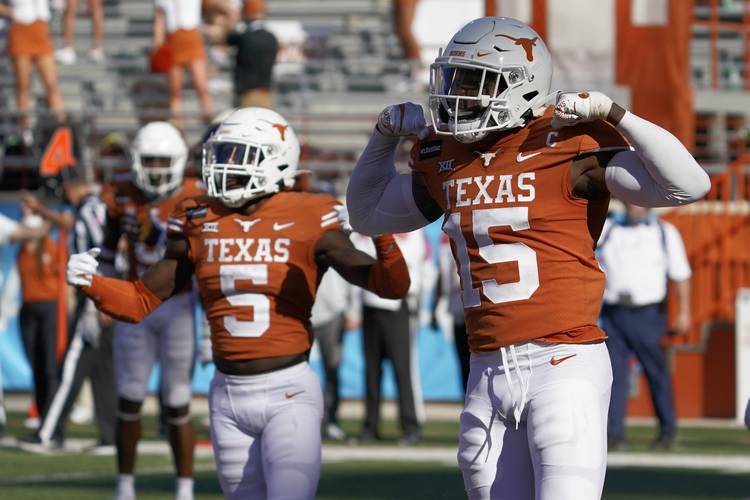 Chris Brown is closing in on the end of his Longhorns career in terrific fashion.

Of course, you might know the undersized Texas strong safety by different names.

Texas defensive coordinator Chris Ash playfully calls him “Little Man,” a tag of affection but also one of motivation for the 5-9 defensive back. The label’s not meant to disparage, rather to pay tribute to the latest example of good things coming in small packages. “He is playing his best football,” Ash said.

Mr. Flex, fans might know him as ever since he triumphantly showed off his biceps to the Royal-Memorial Stadium crowd after breaking up a West Virginia touchdown pass on fourth down in the end zone to seal the win. “It’s electrifying,” Brown said to explain the gesture.

Brown’s first UT head coach, Charlie Strong, stuck the nickame “Peanut” on him back when he was a small but talented freshman who had chosen Texas over Michigan — Jim Harbaugh said he could be “the next Jabrill Peppers” and was the first coach to offer him a scholarship — and 33 other offers from the likes of Arizona State, UCLA and Florida after he totaled eight interceptions his final two seasons.

His teammates call him an energizer or a spark plug or someone, as defensive tackle Ta’Quon Graham put it, “who brings the juice to the defense.”

As for Brown, he goes by BiG Brown, the self-bestowed nickname he has given himself. The i is lowercase, he reminds others, because he didn’t make this journey by himself. “I didn’t do it on my own,” he said.

Way back when, some of his teachers might have referred to the talkative extrovert as the class clown, an appellation that amuses him. “I wouldn’t say I was the class clown,” Brown said this week before this weekend’s Texas’ game at Kansas was postponed to Dec. 12 because of a COVID-19 outbreak among the Jayhawks. “I’d say I was the guy who brings light to a dark situation.”

And he’s been in some dark places, but overcome them, playing his best football and graduating last May. He hopes to continue his career in the NFL or maybe even become a social worker.

“I feel we go hard to expand our platform,” he said, “and fight for the things we stand for.”

In the last three years, he worked through the loss of his beloved grandmother who helped raise him in Houston. He fought through some hard times in an emotionally tough freshman redshirt season that left him searching for answers and direction. He endured a traumatic coaching change from Strong to Tom Herman and the depression of a losing record and has had to claw his way to the top of the depth chart despite a rash of injuries.

But one thing about Chris Brown is clear.

You always notice him, all the more when he’s perfecting the flex. Ash even joked Wednesday, “I’m glad you’re seeing what we practice. We spend a lot of time flexing.”

Brown, who’s 22 years old, clearly has it down.

His long journey was helped along immeasurably by Brown’s “second mother,” Debra Smith, a 5-4 firecracker of a woman who oversaw a household with 11 cousins and grandkids spread out over a two-bedroom home.

“It was definitely a rough patch when she died,” Brown said. “She meant the world to me. My grannie was a Swiss Army knife. She was one of the hardest-working women I’ve been around.”

Smith helped pay the bills by selling her home-cooked meals in the neighborhood. She was a great cook and an even better fisherwoman who used to cast lines for catfish and redfish with Chris until she died from cancer in January 2017 at the age of 60. Mostly, she was a terrific role-model who continues to inspire Brown during his struggles.

Brown calls those “the glory days,” days and nights when he and his young relatives and two siblings would sleep on pallets in the living room and camp out there, eating chips and popcorn and Smith’s home cooking.

“I’ve seen the way she made ends meet, and she never complained,” he said. “We were so close. She always told me, ‘Go get ‘em, baby.’ She kind of shaped my career.”

Oh, and she referred to him as “my little dynamite.”

Brown’s five-year college career wasn’t truly detonated until this final season when the fifth-year senior out of Alief Elsik unveiled an aggressive, confident approach that matches his own, well, explosive personality. His 30 tackles rank seventh on the team, but he’s the team leader with one interception, one recovered fumble, one forced fumble and six pass breakups.

His biggest play on the ball resulted in his trademark biceps-flexing moment. His signature moment came in those closing moments of that West Virginia game when he broke up Jarret Doege’s fourth-down pass to Ali Jennings on a slant pattern in the red zone to seal the 21st-ranked Longhorns’ third consecutive victory.

And, to be truthful, a bit polarizing at times.

“After you make a play, you do whatever comes to mind,” Brown said. “I kind of felt like sending a message that we’re here.”

He’s all about sending messages.

But when he flexes after a nice stop on a completion by an Oklahoma wide receiver, when there’s not a friendly scoreboard favorable to Texas, it tends to send the wrong message to some. But that’s just his style and the persona of this ultra-confident, extremely competitive senior.

That flamboyant, look-at-me approach may turn off some old-school fans interested in protecting their lawns, but it’s also exactly the kind of swagger that all of Longhorn Nation feels has been missing for more than a decade.

He’s helping restore that physical, in-your-face image for a Texas defense that in its last two games against Oklahoma State and West Virginia produced seven sacks, 18 tackles for losses, four fumbles and one interception.

Brown appreciates the love and credits Ash with helping develop his game.

“He has helped me tremendously,” Brown said. “He definitely thinks I have little-guy syndrome. He calls me ‘Little Guy,’ but it comes from a good place. It keeps you humble.”

Even with an occasional flex or two.