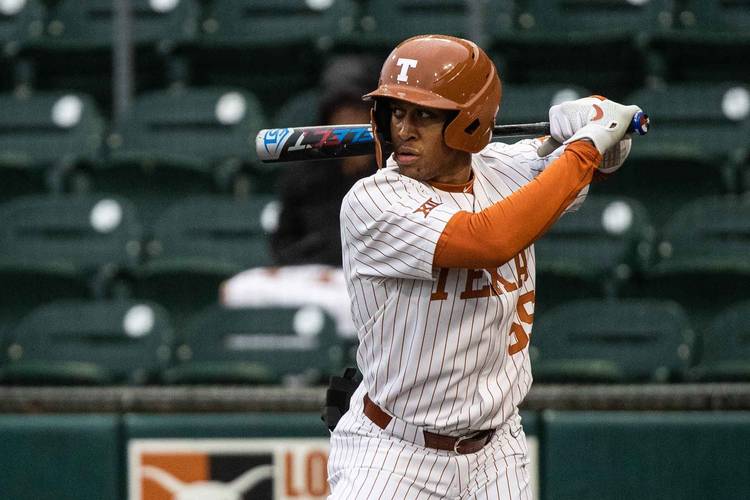 David Pierce didn’t really care all that much for how Sunday’s baseball series finale with Boise State transpired at UFCU Disch-Falk Field.

“Except for one inning,” the Longhorn head coach said, “I thought Boise outplayed us today.”

But he was fond of the ending.

So was new Longhorn hero Cam Williams, the energetic junior college transfer and candidate to be Texas’ full-time third baseman, who jump-started his campaign to win the job. He got a low fastball from Boise reliever Stu Flesland and shortly afterward a high shaving cream plunking from teammate Duke Ellis during a television interview.

In between, he launched a two-run, game-winning home run directly over the left-field foul pole and briskly ran the bases to score himself and Doug Hodo III for a 7-5 win in the 10th inning after the Broncos had tied the game in the ninth on another two-run shot, this one from Geon Hyoung Kim.

“He crushed it,” Pierce said of Williams’ jack, which followed Hodo’s single. “It was nice we responded without panicking and throwing bats and stuff.”

Asked if he got a face full of shaving cream or whipped cream, Williams, who is competing with Murphy Stehly and pitcher-infielder Andre Duplantier II for the third base spot, said, “I don’t know what it was, but it got all over me.”

His teammates got all over him as well, mobbing him at home plate.

Williams’ walk-off bolt — the first such homer by a Longhorn in two seasons, since Kody Clemens’ yard ball against TCU in 2018 —  kept Texas unbeaten and untested at 8-0 with a three-game sweep of the baseball startup. Dawson Merryman got the win in relief after closer candidate Donny Diaz blew the save in the ninth.

While it’s fair to wonder if these Longhorns are as good as their record or more a product of an easy early schedule — they swept a still winless 0-5 Rice team and beat a 6-1 UTSA club and a 3-3 Lamar team — know that they’ve got the makings of a solid pitching staff and remarkable defense led by Zubia, a vastly improved first baseman. Texas’ Coy Cobb provided five strong innings Sunday but still tires at that point and hasn’t shown he’s set for the starting rotation.

Much more will be known when Texas takes on No. 11 LSU and No. 7 Arkansas next weekend at Minute Maid Park and No. 24 Cal State Fullerton here in two weeks. But it’s hard not to like what’s been evident so far.

“Our offense is a little shaky,” said Zubia, who saved several runs with his defensive stops. “But we have timely hitting and good defense, and our pitching has been phenomenal. That will be a recipe for us all year.”

Williams’ homer made him the seventh Longhorn to leave a ballpark this year, although none has more than one.

The offense remains very iffy. The Longhorns struck out a disturbing 26 times in three games against Boise, which is resurrecting baseball after a 40-year hiatus, and hit just .265 in the series even with the help of a couple of wind-blown pop-ups that the Broncos misplayed into hits. They really need to improve their two-strike hitting.

“We’re a long ways away,” Pierce said. “To be honest, we’re still trying to create an identity.”

If any in the solid crowd of 2,000 or so on a raw, chilly afternoon had any doubts about the late-game heroics, Williams wasn’t among them.

“Yeah, I told a few of my teammates,” he said. “I asked the Lord to let me do what I can do, and I did exactly what I came here to do.”

This guy doesn’t lack for confidence. Or unselfishness. Or zeal, if you saw the way he raced around the basepaths, throwing fist pumps en route.

At 6 feet 2 and 195 pounds, he’s built like a linebacker, but he’s strictly a baseball player. He’s an older player — Zubia said the team calls him “Uncle” because he’s older than most as a redshirt junior — who plays the game with the joy of a 6-year-old. But that’s about how long he’s coveted a Longhorn uniform since the day he told his father he wanted to only play baseball.

The son of former major leaguer Reggie Williams wears the same No. 55 as his dad, who played four seasons for the Angels and Dodgers.

He can’t remember another walk-off homer in his career, but he did hit eight long balls for San Jacinto College last season and played for Dallas Baptist before that after a stellar high school career for a Class 7A state champion in Odessa, Fla.

“This is an unbelievable place,” he said of UT. “You see Texas on the cover of video games. It doesn’t get any better.”

Williams, however, will. He’s an embarrassingly hard worker — so much, in fact, that Pierce almost wishes he’d cut down on his own load management.

“He’s probably the most strenuous worker on the team. Him, Murph, Trey (Faltine), (Brenden) Dixon,” Pierce said. “He leads the league there.”

Pierce still recalls the time in offseason workouts when he was watching from the warm inside of the Brown Player Development Center. “It’s raining. In the 30s. And Cam’s taking ground balls out there and throwing them into the first base net. That tells you something.”

It should tell Stehly and Duplantier either of them might beat Williams out of the job, but nobody’s going to outwork him.

Williams acknowledges that his coach wishes he’d dial it back a bit so as not to get burned out, but the third baseman knows only one speed.

Which is why he prefers run-off, not walk-off, homers.