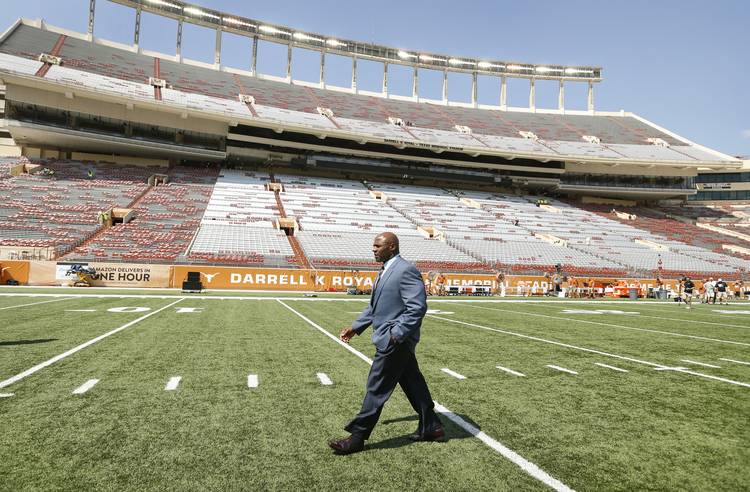 Charlie Strong’s a good guy. He just wasn’t THE guy.

It didn’t work for a variety of reasons, but race wasn’t one of them. Oh, I’m sure it was for some fans and boosters, who didn’t want it to work because of Charlie’s skin color. And Red McCombs was grossly out of bounds when he inappropriately questioned Strong’s qualifications. That sent a horrible message.

And don’t think for a second that Strong and his family didn’t experience racism here.

But school president Gregory L. Fenves and athletic director Mike Perrin desperately wanted it to work. It’s that same passion that drives them to argue successfully before the Supreme Court for race-conscious admissions to increase the school’s black population above five percent. It’s their will to implement a diversity plan in areas of housing, access and transportation. Those are not hollow gestures.

And toward that end, Fenves and Perrin flew to Tulsa to hire an offensive coordinator, allowed Strong to make eight assistant coaching changes and supported their head coach in public and behind the scenes. Fenves was so in Strong’s corner that as late as Thursday he was still considering retaining him if he could coach the Longhorns to an impressive win over TCU.

When Fenves fired Strong Saturday morning a week after one of the most humiliating losses in Longhorns football history, he pulled the plug on what some might consider a botched grand experiment. But it was much more than that.

Strong’s bleak 16-21 record over three seasons notwithstanding, the attempt to make it work wasn’t a total failure even if it appeared so on the surface.

Fenves’ predecessor, Bill Powers, and then-athletic director Steve Patterson set out to make history in January 2014 when they hired the first African-American head coach in a major sport in school history. A proud moment for a university with more than its share of shameful problems with the black community.

It was very much worth the effort. Even though this will be perceived by many as a major setback for black coaches moving forward and could preclude other deserving black coaches from landing elite jobs, it shouldn’t be on the grand scale but probably will. The Black Coaches Association that worked hard for the promotion of African-American coaches has dissolved, but its work was hardly done. Only 11 of the 128 FBS coaches this season are black. Now it’s 10.

Texas didn’t just want this to work. It needed it to work.

Strong has said he felt a sincere obligation to succeed for all the other young black coaches looking for a positive example and hope for the future. And he thinks he let them down. Maybe record-wise, but not in the class and integrity department. Strong was unbeaten in those categories.

Interestingly enough, even though Patterson clearly wanted UCLA’s Jim Mora Jr., he and Powers also had another African-American coaching star on their radar — then-Vanderbilt head coach James Franklin — on their list. Franklin has turned around NCAA-besieged Penn State into a College Football Playoff contender with three winning seasons, the same amount of time Strong had. And David Shaw continues to excel at Stanford as one of the game’s best coaches. Willie Taggart is building something at South Florida, and Kevin Sumlin does moderately well at Texas A&M.

As much as Strong’s exit is a step backward on the surface, Franklin should offer just as much promise for black coaches since he’s succeeding in a tough environment that was as toxic as Baylor is now. And I hate to see that progress muted because of Strong’s three poor seasons on one of college football’s biggest stages.

But Texas shouldn’t be faulted for making a change. A school with its tradition and resources cannot lose to a bleak program like Kansas at the end of Year Three and claim progress after finishing with three losses, two of them lifeless defeats to Kansas and TCU.

And if his successor, Tom Herman, goes 16-21 in three seasons, he should be canned, too. No question about it.

Some may view Strong as the Tyrone Willingham of the Big 12, but Strong left a lot of positives. He brought in three outstanding top 16 recruiting classes to lay the framework for a solid future. Even he said the “next coach” would win 10 games or more in 2017 and a national championship soon. He established a culture of core values, dismissing 10 players in his first season for a variety of disciplinary wrongs in moves that Earl Campbell trumpeted last week when he warned Texas might have become another Baylor but for Strong’s moral underpinnings.

Strong has a strong sense of accountability, never shirking from his culpability and never pointing fingers. He leaves as one of the most beloved coaches ever fired in Austin alongside football’s David McWilliams in 1991 and Cliff Gustafson in 1996. Media and fans trusted and liked Strong. His players adored him, perhaps too much because the most successful coaches in football — Bill Belichick, Nick Saban, Jim Harbaugh, Urban Meyer — are some of the least-liked.

I had the sense that Strong, while hardly a great coach on Saturdays, could have borrowed a page from his predecessor, Mack Brown, as well as Florida State’s Bobby Bowden. Those two were better CEOs and brilliant recruiters more than Xs and Os geniuses. They recruited waves of talent and rode those to national championships, much like Strong might have done, given more time.

That all changed, however, in those 60-plus minutes Saturday in Lawrence, Kan., with one of the most humiliating losses in school history. It was similar to John Mackovic’s UCLA Waterloo or McWilliams’ Miami Cotton Bowl. They all left a mark.

Strong left his as well, as a good, decent man who represented the university with class and grace. As for race, that may be an undercurrent to his departure, but an unfair one, I believe.

I think race had more to do with Strong’s hiring than Strong’s firing. He clearly showed he had the qualifications to handle this job, despite what Red McCombs thought. He didn’t just have success at Louisville. He excelled at a high level.

Maybe he was better at Louisville than here because he was competing in a weaker league and dominating at a lower level, but Strong recruited and developed players there, too. And he checked off a whole lot of lists when Texas hired him.

What killed Strong was his own disorganization and inability to evaluate his staff properly or to make game-day management decisions. Strong had his share of troubles, among them offensive struggles and special teams nightmares. But he also has class and integrity and respect.

He just wasn’t the guy.