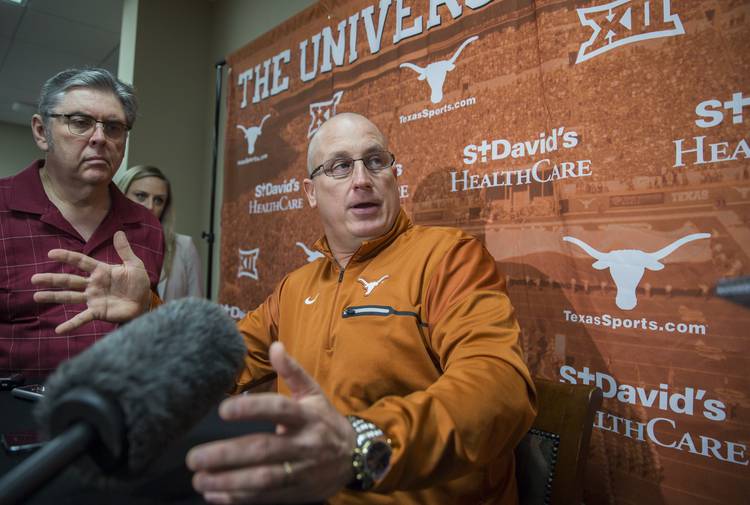 University of Texas Craig Naivar answers questions from the local media about his strategy for the Texas Longhorns at the Moncrief Athletics Complex, UT campus at Royal-Memorial Stadium on Wednesday, Feb. 22, 2017. RICARDO B. BRAZZIELL/AMERICAN-STATESMAN

Craig Naivar will not be making his first appearance in Royal-Memorial Stadium next Sept. 2.

Or even his second.

No, Texas’ season opener against Maryland will mark maybe the 70th time that the Longhorns’ new safeties coach and special teams coordinator has set foot in the stadium to watch the Longhorns play. Give or take.

His birth certificate says he was born in nearby Taylor, but Naivar could have gotten his mail at Royal-Memorial Stadium.

When it came to Saturdays in the fall, he rarely missed a college football game in Central Texas when he was growing up in the small cotton-farming community about 40 minutes away. If the Longhorns played at home, he was there in his parents’ nosebleed, upper-deck seats above the 10-yard line on the south end some 17 or 18 rows up. If they were on the road, he’d find a way to go to a Texas A&M or a Baylor game.

“We were as burnt orange a family as you can be,” he said.

That was long before he decided on becoming a coach. During his 23-year career, he’s ditched a lot of clothes in his nine coaching stops, but he refused to part with one special piece of memorabilia. He’s always hung on to a petite UT garment emblazoned with “Hook ‘em Horns” that he wore when he was 2 weeks old.

His mother got her MBA from Texas and worked for IBM. His father worked the graveyard shift at Westinghouse in Round Rock and later as a machinist at Taylor Manufacturing. On most Saturdays, David Naivar would sleep the day away after coming home from work at 6:30 in the morning from the shift that began at 10 p.m. But his dad would still have enough energy and selflessness to coach his Little League teams and occasionally would accompany Craig to Longhorns games.

And there were plenty of those. Little Craig was in the stands when All-American Jerry Gray ran down Auburn’s Bo Jackson on the north end and separated his shoulder with a literally bone-jarring tackle. And he was there when Earl Campbell ran roughshod over defenders who were no match for him. He saw the huge highlights and the disastrous lows.

And when he sat in his living room and watched Craig Curry fumble away a certain punt against Georgia and a national championship in the 1984 Cotton Bowl that dearly cost No. 2 Texas, he cringed with the rest of Longhorn Nation.

Naivar also can remember a special, noisy time when visiting his grandparents in Bartlett and watching quarterback Robert Brewer dash 30 yards untouched up the middle for a winning touchdown to beat Bear Bryant and Alabama two years before.

“The entire house erupts,” he recalled. “My baby cousin was sleeping in his pajamas, and we woke him up. My grandma reamed our tails for being so loud.”

So Naivar, now 45, understands the importance of Texas football better than most. He knows how fans embrace it, love it, live it. He longed to put on the uniform, too, but was never good enough as a versatile, tough-minded high school quarterback/safety in Taylor to play for the Longhorns.

He was good enough to play safety for Hardin-Simmons in Abilene, and he hasn’t forgotten the pain of losing an NAIA Division II national semifinals game in 1993 to six-time champion Westminster 10-0 during an icestorm on a frozen field in Pennsylvania.

“It was just miserable,” Naivar said, still shivering at the thought. “We’d have smoked ‘em if we could have played ‘em at home. I can still remember sleet coming off the lake nearby. When you’re 6 years old, that would have been fun. Not then.”

He considers his proudest moment playing as a high school senior in the regular-season finale after coming back from a broken ankle in the second game of the season. He’d had a metal plate and six screws inserted during surgery at the same St. David’s Medical Center on I-35 that almost overlooks Texas’ practice field.

That was important, he says, because it helps him relate to other players who go through the trauma of season-ending injuries.

And now here he is, a Longhorns coach. He’s been with head coach Tom Herman so long that it was Naivar who once recommended Herman to then-Texas State coach David Bailiff and helped him get his first big break. Now Naivar calls Herman boss.

“His energy level is off the charts,” Herman said of Naivar. “He’s my pulse of the staff guy. He’s an idea guy. We only use about one out of every 10 of his ideas, but it’s good he feels confident to throw things out. Some of them are phenomenal.”

Naivar had better have a good idea on how to upgrade Longhorns safeties who are as diverse as 28-game starter Jason Hall — who will miss the rest of spring drills with a significant hamstring strain — and sophomore Brandon Jones, who was considered the nation’s best high school safety in 2016 but rarely got on the field as a freshman except to block a couple of punts.

Naivar has the task of improving Texas’ erratic special teams as well as the nation’s 105th-ranked pass defense that gave up 22 passing touchdowns and 258 yards a game. He’s been a defensive coordinator or helped coordinate special teams for 18 seasons and can’t wait to prove himself.

The front porch of a stadium he’s all too familiar with.

Editor’s note: This is the fifth of an occasional series profiling Texas’ new assistant football coaches.