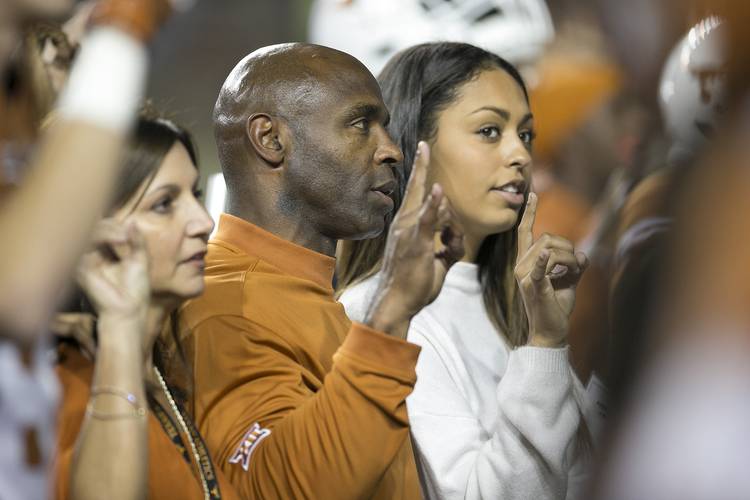 That was TCU’s rout of Texas in Friday’s season finale was. And that very fact should make the decision by school president Gregory L. Fenves to make a coaching change that much easier.

The Texas administration made nothing official on Friday night after the Longhorns’ lopsided 31-9 loss to TCU, but it is expected that an announcement that Charlie Strong will be dismissed on Saturday, and the school will move fast to court Houston’s Tom Herman. The scenario was set in motion during a bleak performance at a barely half-filled Royal-Memorial Stadium with what one long-term Texas observer estimated at 60,000 fans.

And next a buyout.

Those things should be set in motion by a lackluster three seasons punctuated by yet another one-sided defeat for Texas, which assured Strong of a 16-21 overall record and improbably no bowl game for the second straight year. Two straight 5-7 teams, which will deny Texas of a post-season berth in one of the 40 bowls that pair 80 of the 128 FBS teams, are totally unacceptable.

“Everybody knows in the back of their heads what’s going on,” linebacker Malik Jefferson said of the consequences of the game. “We did our best.”

So did Strong, but he will be out in three quick seasons.

Talk about your real up-tempo.

While new offensive coordinator Sterlin Gilbert couldn’t fix an ailing unit that eventually mustered only 50 points in three straight losses to West Virginia, Kansas and TCU to end the season, Strong couldn’t have the wherewithal to stop the retreat of this proud program.

Curiously enough, that is the same number of points that Texas put up in its very first game of the year when Strong struck the clear highlight of his tenure. And so a team that started the season with so much promise on that glorious Sunday night in the first week of September with a double-overtime win over fabled — and fake, as it turned out — Notre Dame whimpered to a close with pratfall against an inspired TCU.

Texas trailed the entire game, didn’t score a touchdown and finished the contest with seven offensive series that included five punts and an interception on the final play of the night. On a Hail Mary, fittingly enough.

Strong put his best face on the delicate topic of his future and even compared the program to baking a cake.

“The cake has been baked,” Strong said. “The only thing you need to do now is put the icing on it and slice it. That’s what this team is.”

Well, it’s highly unlikely he’ll have his cake and eat it too. There could be a new baker in town by Monday.

In what was a microcosm of Strong’s tenure in Austin, the Longhorns were blown out by a 5-5 team that had dropped three of its last four games and almost lost to Kansas as well. But TCU didn’t. Texas did.

Strong alluded to the pressure his players felt during the stretch of this third season and constantly reminded his players to enjoy themselves and have fun. But ultimately, they had neither the experience or the resolve to get over the hump at a school that will always have that pressure as college football’s second winningest program ever.

As young as the team is — and it started two freshmen and 11 sophomores Friday — Jefferson didn’t think that’s a valid excuse, this close to December.

“We’re young, but that has to be overruled at some point,” Jefferson said. “You got to act like you know what you’re doing.”

This game looked eerily similar to many of the losses in Strong’s time at Texas.

Struggling offense with a freshman quarterback who regressed. Shane Buechele had more incompletions (23) than completions (16) and did not look sharp.

Bad special teams with a change of kickers in the season finale. Trent Domingue missed yet another clutch field goal to finish with seven misses in 21 tries and was replaced after the first quarter. He was wide on three of his last five attempts, missing one in each of the last three games.

Poor game decisions like taking a field goal on fourth-and-goal. While replays appeared to show D’Onta Foreman may have scored on a fourth-down try at the lip of end zones, officiating ruled otherwise. The next time Texas was that close, it oddly chose not to gamble but still missed a field goal.

The players were distraught. Foreman sobbed all the way to the locker room. Faces were stoic, emotions were raw. Strong was serenaded with polite applause before disappearing up the tunnel.