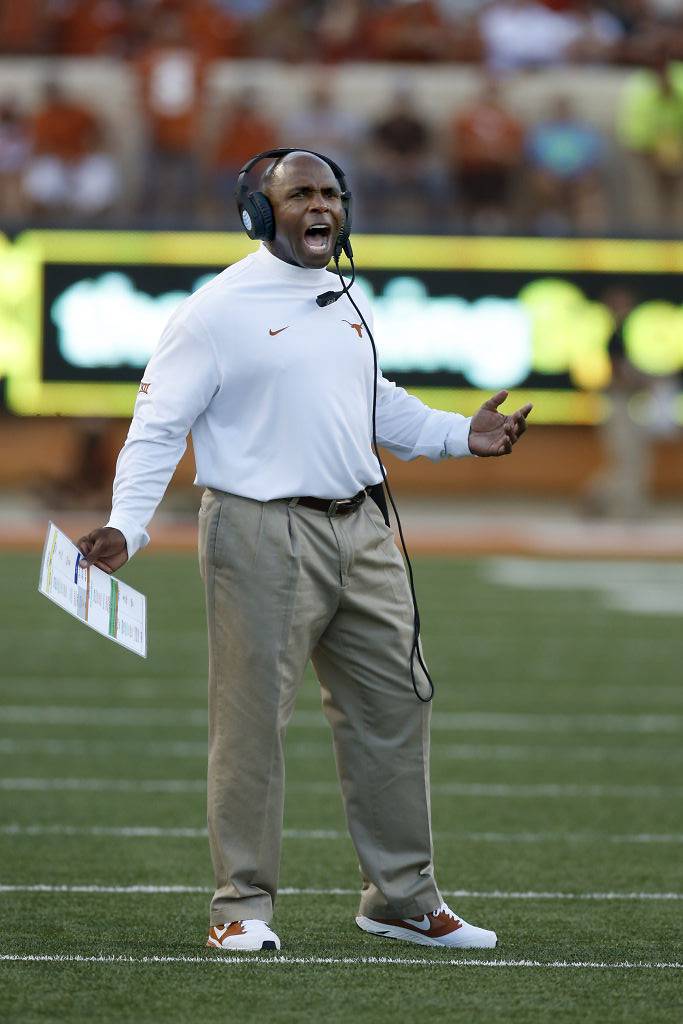 Texas head coach Charlie Strong on the sidelines in the first half against Cal Sept. 19, 2015 at Darrell K. Royal Memorial Stadium in Austin, TX. RODOLFO GONZALEZ/AMERICAN-STATESMAN

The stage was set.

All the elements were in place.

The frenzied crowd was on its feet, lungs bared, mouths roaring their delight on every snap of the ball. The team that couldn’t score more than a field goal in South Bend was poised to put up 45 points and probably more on this muggy Saturday evening. The comeback was nearly complete. The hero would soon be fitted for his crown.

It had everything but the correct finish.

Nick Rose, wide right. There’d be no overtime, only the agony of defeat.

The local favorites had lost again.

Someone hacked into the script. This was to be the defining moment, the jumping-off spot for Charlie Strong’s program, the milestone win that would launch him and his team toward higher heights, more victories, maybe even a championship down the horizon. None of that was guaranteed, of course, but you could sense the turnaround, you could feel it.

A come-from-really-far-behind victory over a 2-0 Cal team with a future first-round quarterback was in Texas’ grasp. Once down 21, the Longhorns were about to become the Longhorns again.

Jerrod Heard’s statue was being molded. Bring on the big, bad Big 12. Heck, the win was so big that UT President Gregory L. Fenves was probably set to legally change his name to Gregory W. Fenves.

This could have been DKR whipping his alma mater, Oklahoma, 15-14 in his second season in 1958 to jump-start his young program. This almost was David McWilliams’ stunning upset of Penn State in 1990 to launch the “Shock the Nation” tour. This might have been John Mackovic’s resounding win over Nebraska in the first Big 12 title game or Mack Brown’s first big win with Major Applewhite and Ricky Williams in Lincoln.

That was the game when Mack had told me earlier in the week there was no way Texas could win. But his players believed otherwise that day.

And this contest with Cal was the game that could have made Longhorn Nation believe in Strong. Maybe it will have that effect anyway.

“I hope this is one that turned the corner for us,” Strong said.

Certainly he first has to fix what looks to be a very Mackovickian defense. It’s just plain horrid. Texas can’t stop the run at all. Notre Dame, Rice and Cal have averaged 241 yards on the ground against the Longhorns. Heck, Cal’s best running back was out with a hip strain. His backups topped off a huge night with 280 yards, stepping off 6.8 yards a rush. That’s inexcusable.

Athletic director Steve Patterson got fired. Co-offensive coordinator Shawn Watson was demoted the week before. It’s still mind-boggling that Watson couldn’t have seen the potential in the mercurial Heard, who should have been playing last season and who, it should be pointed out, may be here only because Mack offered him a scholarship. Given the new demand for total accountability around these parts, is defensive coordinator Vance Bedford on notice?

As a defensive guru — I think it says so right there on his business card — Strong needs to look in the mirror. Bedford should as well. Now they weren’t struck dumb overnight, so it appears obvious this is a unit that was largely barren of talent even before both starting safeties went out with an ejection for a dubious targeting call (Dylan Haines) and a shoulder injury (Jason Hall). Anyone see a ton of NFL-caliber talent on that side of the ball?

There are freshmen like Malik Jefferson, Kris Boyd, P.J. Locke III, Davante Davis and Breckyn Hager all over the field on defense, but that doesn’t excuse the play of the upperclassmen. If these coaches can’t repair the defense, can they hide it or mildly improve it?

Stick this 2015 resurgent offense with last year’s defense and all those headhunters like Malcom Brown, Jordan Hicks and Quandre Diggs, and Strong would have something. But that’s not how it works. Even as poorly as Texas played on defense — albeit against outstanding quarterback Jared Goff, dynamite receiver Kenny Lawler and terrific scatback Khalfani Muhammad — the Longhorns somehow still were in the game.

The game Charlie Strong just had to win. Like Cointossgate UCLA last year. If he’s going to survive, and thrive, he has to beat somebody he’s not supposed to.

Like touchdown-favorite Cal, which led 45-24 with about 16 minutes left.

Now there was no possible national championship on the line Saturday night as there was in 2008 when Blake Gideon failed to come up with the interception and Texas got Michael Crabtreed at the heart-breaking end in Lubbock that wacky, triangular season. But this one hurt no less.

The pain was real, palpable.

Safety Kevin Vaccaro, whose collision with Muhammad caused a fumble that Texas recovered in the end zone, said, “We came to work this week, wanting to prove everyone wrong. It sucks.”

Strong and his players spoke of the pain in losing a winnable game in sensational fashion. Jefferson maybe misspoke when he said the team could use this “as a learning disability.” The defense could sure disable a season and without question cost Strong a milestone triumph.

Sonny Dykes raised his Cal record to a still-bleak 9-18, but he got his defining victory in Austin and cares only about this year’s 3-0 record.

So Strong’s signature win will have to wait. Maybe it’ll come later. Or perhaps it won’t come at all. But there’s a hint that it might. I really think it will. Those young defensive players who are scuffling so much will grow up and will become sophomores and juniors, and they’ll remember devastating nights like Saturday.

Instead, Charlie got wide right.