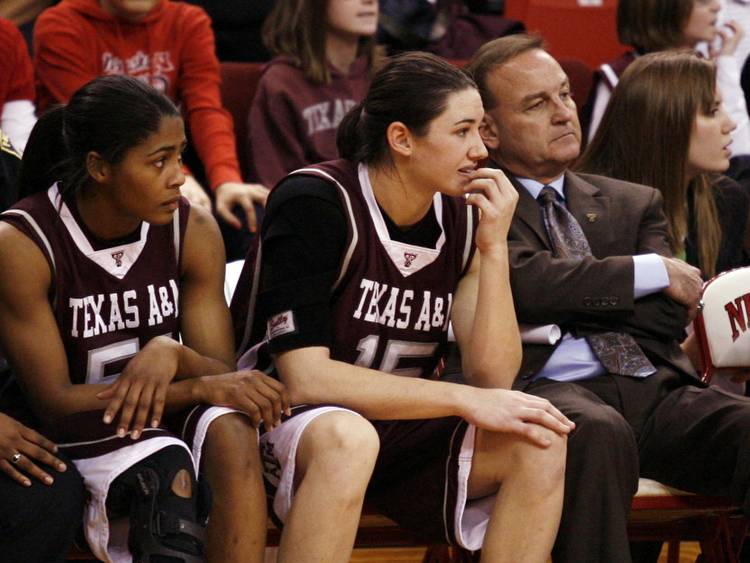 The two coaching rivals, who’d both prefer a 2-by-4 against their heads over losing at anything, had already planned to drive together to Austin that March night to catch the girls state tournament at the Erwin Center. So they headed off. In utter silence.

And fumed some more.

Then some 45 minutes outside Austin, Blair had all he could stand.

“We got to talk,” Blair told his friend, “or I’m going to fall asleep.”

So they played sports trivia the rest of the trip. Or baseball trivia, as Schaefer tells it, even though Blair’s a huge Texas Rangers fan and Schaefer wanted no part of it. He can still remember that beatdown, something like 88-33, and for a then-30-year-old who was coaching women’s basketball for just his second year, it stung.

During that eternity of a drive, Schaefer would snap on the interior light from time to time and take a peek at the stat sheet. And just sigh.

They’ve been competing against one another ever since. And will again, Schaefer told our “On Second Thought” podcast after being named the successor to Texas women’s coach Karen Aston on Sunday. “Hopefully, we can get together and play.”

It was once presumed the 59-year-old Schaefer might succeed his former boss instead. But Blair, at 74 the oldest women’s coach in the nation, ain’t leaving anything in the tank. He still takes his hourly walks from his home off the fifth hole at Traditions Golf Club in Bryan and is going as strong as ever. Mike Krzyzewski just last summer, when asked by Blair how to stay connected, told him to just give his players the best he has to give.

Blair has already blazed his path as the winningest coach in A&M history with a national championship on his résumé. Schaefer can claim a share of that 2011 title as well as Blair’s top assistant, a defensive-minded guru he still hopes to be in Austin.

And hopefully they’ll battle more often on the hardcourt if the two sides can agree to meet in a renewal of one of the best rivalries in the country.

“We can’t talk about that as of right now,” Blair said. “We can’t do anything unless the two conferences do something (and sign off). But anything can happen.”

Schaefer would prefer that test over sports trivia. Or golf, even though Blair says Schaefer has a 4 handicap and used to give him two holes a side.

In basketball, it’s all square. No quarter given.

Schaefer has gotten his revenge in spades, having beaten Blair’s A&M teams in eight of their last nine meetings out of 11 total battles.

But not fishing or hunting. Blair doesn’t do fishing holes down at Port O’Connor for redfish or speckled trout and doesn’t hunt dove as Schaefer does. Or turkeys as Schaefer was doing a week ago when Texas’ Chris Del Conte called.

Of course, Blair said very few coaches “can hunt, fish, golf with a 4 handicap, coach basketball at a high level, raise twins and stay married like Vic does.”

Schaefer got whipped but good by Blair’s Aggies in their first two SEC showdowns, but Schaefer warned at the press conference after the second one, “Better get in your licks now because it’s not always going to be this way.”

So who’s the most competitive of these two driven grinders who employ similar styles that have made Blair a household name in women’s basketball and a “six-time Hall of Famer” — his rival says — and have groomed the elite Schaefer into the new Texas coach?

Neither one ever wants to concede.

Just not in their DNA. They may not be clones, but here’s betting they are equals.

At least one former coach who knows both well thinks interesting days lie ahead.

Boyce Honea, the 79-year-old legend at Houston Milby who gave Schaefer his first coaching job as the school’s freshman boys coach (and head tennis coach), can’t wait to see how the rivalry plays out.

“Believe me, Blair’s glad to get Vic out of the SEC,” Honea said. “He probably did a little dance when he heard he was leaving the SEC. But there is a reason Blair will be unhappy. Now Texas has three top-20 girls teams in the state, and they’ll be recruiting the same athletes. It’s gonna be very competitive. Vic doesn’t like to lose.”

While Blair said he rescued his old buddy from Sam Houston State where Schaefer first was an assistant men’s coach and later the head women’s coach and took Schaefer with him to Arkansas and then A&M, he also recommended him to Mississippi State. MSU gave Schaefer his first Power Five head coaching gig and saw huge dividends with a pair of appearances in the national title game and 221 victories in eight seasons.

Before that, Blair endorsed Schaefer to North Texas, but the Eagles weren’t smart enough to hire him.

Blair does give Schaefer large credit for spearheading the Aggies’ national championship with his defensive acumen. Blair’s long been known to hire top assistants and not yes-men or yes-women.

“I still have the most veteran staff in the country,” Blair said. “They need to tell me what I need to hear, not what I want to hear. I don’t want a bunch of bobblehead dolls. I’m not afraid to hire people who are better than me in certain areas.”

Schaefer’s already gotten the better of Blair on the court and off it at times. He successfully wooed two-time All-American post Teaira McCowan out of Brenham, a 38-minute drive from College Station, but Blair wins his share of recruiting battles as well to go with more than 800 victories.

“I don’t need to be Vic’s publicist,” Blair said. “He knows the blueprint. Hopefully, Vic has learned a little bit from me, but he’s his own man. He’s got his orange sunset over there, and he will do very well.”

If not, there are going to be some deathly quiet bus rides for his Longhorns team.