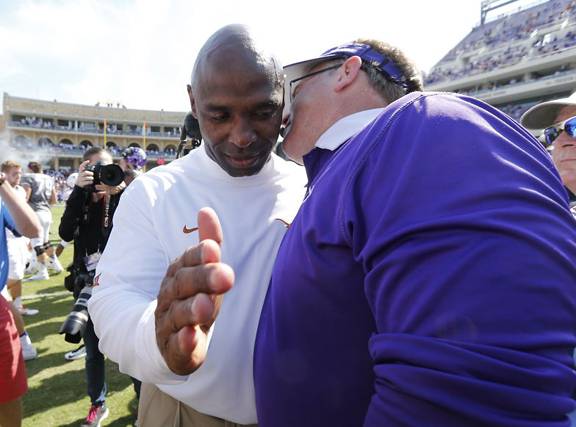 FORT WORTH — Texas really may be sinking to new lows.

The Longhorns were bludgeoned in a soul-crushing, 50-7 loss to one of the best college football teams in the country on Saturday. They gave up more than 600 yards of offense to powerful, fourth-ranked TCU, were shut out for nearly 55 minutes and committed so many special teams blunders that even the deep snapper contributed with a high snap that resulted in a safety. This was Freedom Bowl-ugly, UCLA Rout 66 Revisited.

And all everybody wants to talk about is a tweet. Or a retweet.

But not just any provocative tweet. Rather, Kris Boyd’s.

The freshman cornerback apparently retweeted a Texas A&M fan’s tweeting offer to Texas linebacker Malik Jefferson and Boyd to transfer, a condescending suggestion that the Aggies are ready to accept them. As if that weren’t bad enough, Boyd worked his social media fingers to his 8,348 loyal Twitter followers at halftime of a game his Longhorns were losing 37-0.

Unfollow that guy, Kris. Maybe unfollow Kris if you’re one of his teammates.

Defensive coordinator Vance Bedford learned of Boyd’s preoccupation as he walked off the field and seemed to good-naturedly rub Boyd’s hair and pat him on the back as they disappeared into the locker room. Boyd, who played on special teams and defense and ran back three kickoffs, was not made available to the media.

Charlie Strong understandably wasn’t overly concerned with Boyd’s Twitter status immediately after the game, but the head coach did say, “Players should not be on their phones at halftime.”

Unless, of course, say, somebody wants to transfer. Or if the coaching staff may be losing control of its team. That’s reasonable to ask, given how unprepared the team looked and how unmotivated it appeared in getting totally overwhelmed on the field. At no point was this game remotely competitive. Strong’s got so much on his plate, he might as well be at a Golden Corral buffet.

Offensive play-caller Jay Norvell took umbrage at the suggestion, saying of the players, “They haven’t shut down. They haven’t quit. We challenged them to respond in the fourth quarter. We’ll watch the film and show who did.”

If nothing else, Boyd’s faux pas serves as a backdrop for what may be going on with a floundering Texas program that has slipped to new depths with the second worst loss ever to the Horned Frogs and a frightening 1-4 start to the season. At an inconvenient 7-11 in his second year, Strong may have to come to grips that he’s not getting through to his players.

“I think we were ready,” Strong said. “We go out and get a three-and-out (on TCU’s first series), and we thought we had something going. We have to learn how to compete. We don’t know how to compete yet.”

That’s about as damning a comment a coach can make midway through his second season. Much of Strong’s distress comes from a lack of talented upperclassmen and reliance on terrific if inexperienced freshmen who might make Texas the best junior varsity in the Big 12.

After all, Texas played three freshmen on its offensive line — but so does Oklahoma — for big chunks of time Saturday and has a redshirt freshman at quarterback and receiver to go with true freshman wideout. I counted at least 10 freshmen playing on defense.

But Strong has to make sure he doesn’t lose his locker room, and a harsh stance on Boyd’s misplay would send a strong message. Not sure tweeting at halftime breaks a core value, but it probably broke Charlie’s heart. It sure caused a media firestorm.

Should Strong ever lose his players, he’s done. I don’t think he has. But he did call out his team for a lack of leadership and said he “needs that one guy” to take over. Maybe a Teddy Bridgewater or a Malcom Brown, but don’t look for either, obviously.

But Jinkens also, “We still believe in (Strong). He’s a good coach and a good man. We’re really behind him.”

But somebody has to get in front of these issues and put a stop to a three-game losing streak next week against — gulp — No. 15 Oklahoma.

Just days after a players-only meeting that clearly did no good, Strong may have to consider a coaches-only meeting to figure out how to salvage a year with so few playmakers and so many youngsters who are deservedly getting much of the playing time. What’s really scary is that Norvell said all this mess occurred after “a great week” of practice. What happens if the players get lazy Monday through Friday?

This is a team that had better rally around itself quickly and show it’s had enough. Boyd’s tweets aside, it sure didn’t look like a team so fed up with the ugly trend the season has taken that it’s ready to turn it around. But quarterback Jerrod Heard defended his tweeting teammate.

“Kris has a lot of heart, and he’ll speak his mind whenever he needs to,” Heard said. “He’s going to have to do his thing.”

Preferably not at halftime.