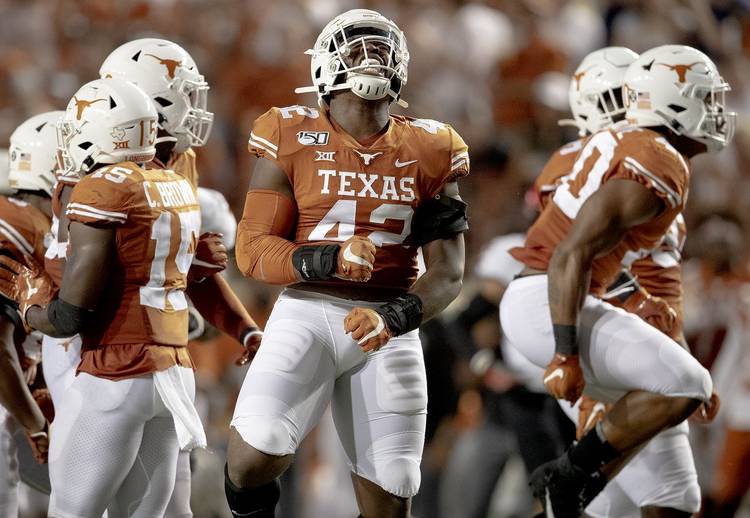 At long last, Texas can definitively and safely make a legitimate boast.

The Longhorns are better than Oklahoma State.

As in the game ended just in time after quarterback Sam Ehlinger’s clock-killing run, and the Longhorns sprinted into their locker room at Royal-Memorial Stadium before someone ordered them back for one more play. They were overjoyed to survive this one.

Mike Gundy was pretty much beside himself afterward.

The Oklahoma State head coach lamented settling for field goals, bit his lip on the failure to score on two series inside the Texas 5 and spoke about needing more discipline on his team.

In the other locker room, Texas’ Tom Herman wasn’t exactly thrilled either. He even apologized to his team and said Saturday’s contest “was not a very well-coached or very well-played game in certain spots.”

Who in the heck won this game?

Did, in fact, anyone win the game? Or did someone just lose it?

Texas won 36-30 with four more touchdown passes from the unflappable Ehlinger, a breakout game from tailback Keaontay Ingram and a crippled defense that saw six starters go down with injuries but still stiffened with two goal-line stands and a pair of interceptions.

Or Oklahoma State lost 36-30 because of two interceptions, the inability of Chuba Hubbard and Tylan Wallace to get free and some extremely poor coaching decisions by Gundy, especially on a fake field goal on a fourth-and-6 that resulted in an incomplete shovel pass from the holder.

“He apologized to us,” Texas linebacker Joseph Ossai said of Herman. “But we’ve got his back, and he has our back.”

Herman’s just happy he walked out with a 3-1 record  and 1-0 conference mark after a game with more swings than an elementary school playground.

“We’ve been telling (players) since we got here that our best was good enough,” Herman said, “but less than our best probably wasn’t. Tonight we took a step, in my opinion, because we played less than our best and still beat a really, really good football team.”

At times, however, these two couldn’t play worse.

In what he said was “an ill-advised call but the right decision,” Herman went for it on a fourth-and-3 instead of opting for a safer 45-yard field goal attempt and got a run stuffed. He labeled the punt return game as “embarrassing,” noting that both Jake Smith and Brandon Jones fumbled punts that led to OSU touchdowns. Texas had several critical penalties as well.

But Gundy tried that ill-fated fake field goal on a fourth-and-6 that might have been better tried before the delay of game that scotched the fourth-and-1. And he beat his head against a wall and gave the talented Hubbard — a recruit that Alabama coveted — the ball a staggering 37 times even though he never ran longer than 13 yards and averaged but 3.3 yards a carry, his 121 yards notwithstanding. And he should have force-fed Wallace, a Biletnikoff Award finalist last year, instead of getting him the ball just five times for 83 yards, only twice in the second half for 17 yards.

It was that kind of night, both a battle of attrition and a war of what-ifs from two of the most talented teams in the Big 12.

There was a lot of good that came out of this game.

Texas escaped, snapping a five-home game losing streak to OSU and a four-year stretch of overall ineptitude in the series.

Ehlinger showed he’s mortal with his first interception of the year (on a tipped pass) but had his third four-touchdown passing game of the season.

Even without the injured Collin Johnson again, four Longhorns receivers caught touchdowns, including tight end Cade Brewer on a nifty flea-flicker play that was installed this week.

And assuming his best cornerback Jalen Green recovers from his dislocated shoulder and safety Caden Sterns rebounds from a knee injury, the pass defense could be, well, passable.

“It was a nail-biter at the end,” UT tackle Sam Cosmi said. “It felt so good that that streak is done.”

Oklahoma State (3-1, 0-1) is damn good. It will be no easy out for any team and, with more help on defense, could still make the same run at a Big 12 title that Texas, too, is aiming for. The Cowboys have one of the most elusive and slippery quarterbacks in college football in electric redshirt freshman Spencer Sanders and two of the best weapons in the game.

But survival was the key in this emotional see-saw affair that had three lead changes and an outcome ultimately settled by a Texas recovery of an onside kick and Ehlinger’s 29-yard run to salt away the clock.

Until then, the outcome was up for grabs.

Takes one to know one.