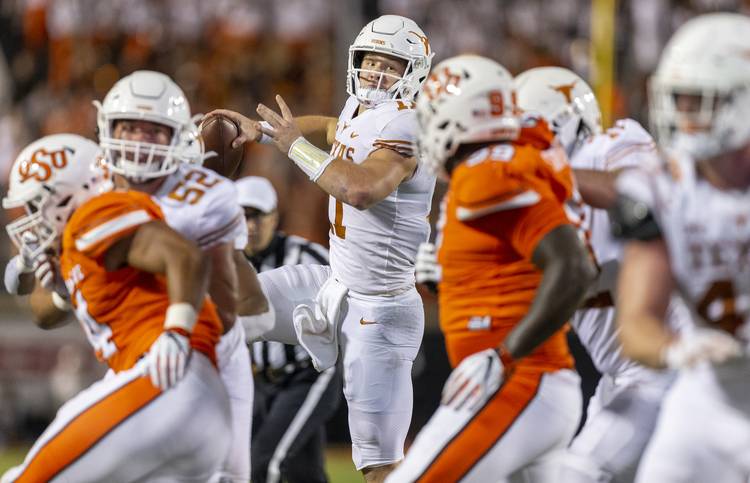 Texas hasn’t beaten Oklahoma State in Austin since … wait for it … since 2008.

It’s been a minute. Seems longer.

That was two UT head coaches ago.

That was two presidents ago.

That was at least two Mike Gundy hair-dos ago.

That was too, too long ago.

The last time Texas won in this series at home, Roschon Johnson and Jake Smith and the other Longhorns true freshmen were in the second grade.

Oklahoma State has actually been a thorn in Texas’ side forever, having won seven of the last nine meetings. To make it worse, the Cowboys have won five straight at Royal-Memorial Stadium and were actually the higher-ranked team in all of them, save in 2016 when OSU upset the 22nd-ranked Horns.

Of course, it took a spectacular, Mack Brown-coached team that was ranked No. 1 in the country to pull off the last home win over OSU. That, of course, was Brown’s second-best team in his 16 years at Texas behind only the 2005 national championship team. The 2008 bunch was the one that may have been a last-second Michael Crabtree touchdown catch away from a second title in four years. After all, Brown had 15 players who were named to the first or second All-Big 12 team that season.

And it still was difficult to survive the Cowboys that year.

Those Longhorns had begun the year ranked 11th and ascended to the top spot after winning their first seven games in impressive fashion, including over then-top ranked Oklahoma on Cody Johnson’s tough running, Colt McCoy’s pinpoint passing and Jordan Shipley’s 96-yard kick return.

Then, like now, Gundy had an explosive and talented offense. He always does.

Consider that since he became the head coach in Stillwater before the 2005 season, Gundy has had 104 players produce 100-yard rushing games. Texas? It’s had 17 over that time period. Four of those who went over the century mark were quarterbacks, two of them from Sam Ehlinger.

This time, Gundy’s got the nation’s top wide receiver and top running back. Tylan Wallace is the most proficient wideout in the country with 390 yards and six touchdowns. Chuba Hubbard ranks as the leading rusher with 521 yards and a 7.9 yard average per carry and seven scores. Spencer Sanders only ranks 75th in passing, but still completes 67 percent of his throws and has seven touchdowns against just one pick.

But the 12th-ranked Longhorns have a great chance to snap that depressing, five-home game losing streak to the Cowboys when they come visiting at Royal-Memorial Stadium on Saturday.

The Longhorns appear as well-equipped as ever.

This Texas team is brimming with confidence after drubbing Rice and playing then sixth-ranked LSU mostly on even terms. “Our confidence is as high as it’s been,” Herman said Monday.

Texas is playing at home where the Horns are, uh, just 7-5 under Herman but have won six of their last eight games and were a couple of plays away from knocking off No. 6 LSU. The Longhorns are getting healthier. Herman said he expects three starters held out of or injured in the Rice game — wide receiver Collin Johnson, linebacker Joseph Ossai and center Zach Shackelford — to be back for the Cowboys.

Mostly, the Longhorns are in better position to win because they’ve been validated. While they hoped to win in Herman’s first two seasons, this year’s club expects to win. Thanks to more maturity, better athletes, an outstanding quarterback and a recovering running back room, Texas is poised to start Big 12 play in a big way.

If it can get by Oklahoma State.