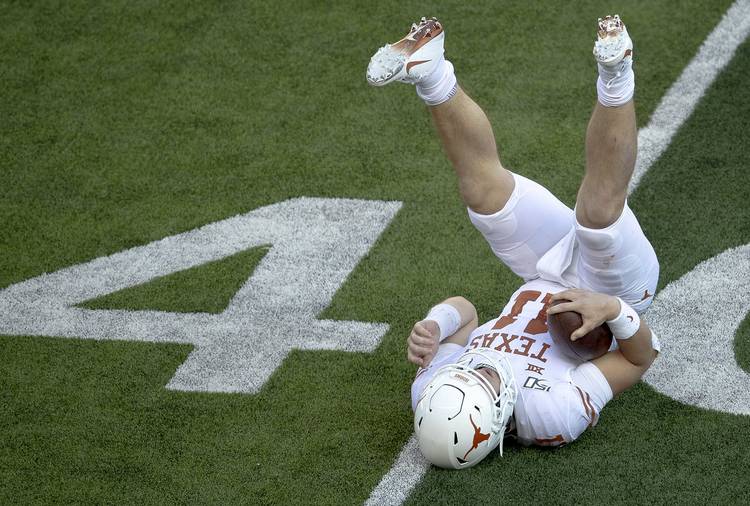 Texas quarterback Sam Ehlinger (11) ends up on his back after being sacked against Baylor during an NCAA college football game on Saturday, Nov. 23, 2019, in Waco, Texas. [NICK WAGNER/AMERICAN-STATESMAN]

Sam Ehlinger called them great questions, but he had no answers either. “I don’t know.”

When Chris Del Conte was asked about the ongoing troubles of the Texas football team, the athletic director in the back of the press conference room told me, “No comment.”

In truth, what is there to say?

After a Longhorns team that began the year ranked 10th in the nation with enormous expectations dropped a lopsided 24-10 game to Baylor in a humiliating offensive performance Saturday afternoon at McLane Stadium, no one can adequately explain how that same Texas club now sits 6-5 overall and 4-4 in the Big 12 with one game left in a most irregular season.

The Longhorns are bowl-eligible. That’s the best they can say. But Texas is losing respect fast and is also a world away from competing with the heavyweights in the College Football Playoff anytime soon. That’s how far Texas has slipped. At this point, it’s hard to tell a Herman team and a Charlie Strong team apart.That especially holds on the offensive end after Texas went 59 minutes and 59 seconds without scoring a touchdown. Until that late, late, really late scoring drive, the Longhorns didn’t have a prayer of scoring against the Baptists. Until third-string running back Daniel Young bulled his way over from the 4-yard line with 0:01 on the clock, Texas had been totally inept and not penetrated further than the Baylor 30 all game long.”It’s very frustrating,” said Ehlinger, who threw for 200 yards and ran for 102 yards before the sacks are included. “We’re not holding up our side of the bargain. We’ve got to fix it.”

So where do you start?

Where will it end? Is there an end?

Somehow this great, innovative machine under Herman, the supposed offensive guru, one that hung with LSU and hung 38 points on the No. 1-ranked team and easily put up 48 on hapless Rice, 45 on respectable Louisiana Tech and 42 in the hills of West Virginia suddenly can’t find the end zone.

Hell, they have a hard enough time locating the red zone.

Herman, as the offensive coordinator at Ohio State, won a national championship with a third-string quarterback in Cardale Jones. Now it can barely manage a touchdown with Ehlinger, one of the best quarterbacks in school history although he’s clearly regressing.Since the win over the Mountaineers, Texas has scored more than 27 points in a game just once, that in a 50-48 escape of bottom-feeder Kansas. It has won just twice since Oct. 5, both at home, both on last-second field goals to beat the Jayhawks and Kansas State.Plain and simple, the offense has stunk of late. It’s gone in a shell the last two weeks. After posting eight three-and-outs against Iowa State and rushing for a scant 54 yards, Texas followed it up with decent numbers of 391 yards against Baylor but had one three-and-out and six other offensive series in which it managed just one first down before giving up the ball.

But Texas could barely run the ball against that three-man line — it had Keaontay Ingram’s 68-yard burst before the half to set up Cameron Dicker’s 48-yard field goal, but otherwise 123 yards on 30 tries — and couldn’t protect either, allowing five sacks and never really effectively blocking Baylor’s twists and stunts. “We really thought we had made good adjustments in the run game,” Herman said. “We did have hats on hats, but we just didn’t develop our guys enough in finishing those blocks.”As a result, Baylor pretty much suffocated Texas, the same as Iowa State did with sending eight into coverage.

Texas was without outstanding receiver Collin Johnson for the second straight game and without a disabled Ingram for the second half, both critical handicaps. But the offensive line was anemic and looked overmatched against Baylor’s fast, physical defense. Three of the linemen were hit with personal fouls or unsportsmanlike conduct, including a mouthy Parker Braun who apparently lashed out at the referee.

Asked if the season has gone how he thought, center Zach Shackelford said, “What do you think?”

This much appeared obvious with Texas’ second consecutive loss and fourth in six games.

In short, this team can be described as such:

“I have a lot of emotions,” Ehlinger said. “I certainly didn’t expect it to be this way.”

As for having any doubts in Herman’s ability to lead an offense and a program, Ehlinger said, “It’s not my position to comment. I still feel trust, love and confidence in every single player and coach on this team.”

Does the head coach really need to head-butt his best defensive lineman four times — without wearing a helmet, mind you — in a pre-game huddle to get his team fired up?

Is Texas the only team with injuries? Baylor lost its middle linebacker for the year at midseason, and his replacement, Terrel Bernard, has played just as well. And with a wrap on his broken right hand. It also lost a starting left tackle for four weeks. Its running backs have played hurt.

Can Texas find its way out of this black hole?

Questions. Lots and lots of questions.