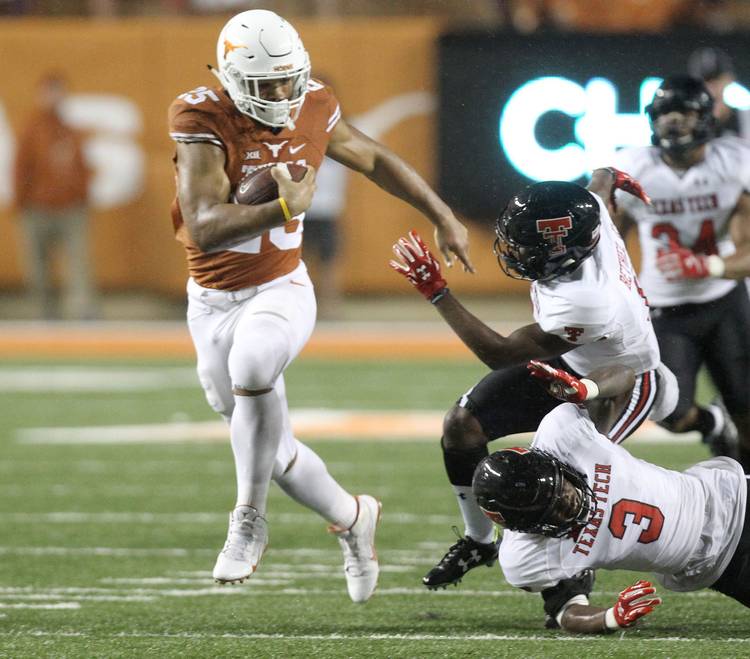 With one game left in the football season — yes, the whole season — Texas has finally found its identity.

The same lingering problem persists, however. It still can’t find a win.

Yet another one got away on Thanksgiving night — and so did Texas’ bowl chances — when an injury-riddled-and-then-some defense couldn’t get the one stop it needed in a second half played at breakneck pace. It’s slightly understandable, given the fact that Texas Tech has the nation’s third-best passing offense and Texas had six defensive starters leave with injuries.

But those facts sound a bit hollow at this point.

So add a 48-45 loss to the Red Raiders to the mix along with the near-miss against once-beaten Oklahoma State and the nearer-miss versus respectable Cal, three defeats that games that doomed Texas to back-to-back losing seasons for the first time since 1988-89. That’s a while ago.

Just don’t blame the rushing game. It’s become as much a part of Texas’ identity as, well, losing. The Longhorns have both down pat, rushing for a season-high 403 yards but falling for the third time in the last four games to fall to a unimaginably unacceptable 4-7 record.

Of course, it would have been nice if budding star Chris Warren III had more than 25 carries. And the true freshman might have but for a costly penalty on Texas’ ill-fated series that put it behind the chains. That led to a fourth-and-7 decision and a bizarre deep pass to Daje Johnson that fell incomplete when the Longhorns desperately needed a fresh set of downs.

Tyrone Swoopes had played admirably in relief of the concussed Jerrod Heard and was 2 yards shy of 100 yards rushing, but was woefully inaccurate all night on deep throws, further calling into question the decisive play call.

“Tyrone’s got to learn how to get in a rhythm,” play-caller Jay Norvell said. “It’s something everybody’s got to do. But he played with a lot of confidence. Games like this, you got to make plays, and you got to make throws.”

Which is why Texas won’t be going to a bowl game. Heard threw well against Cal, but Texas averaged just 109 yards passing in its other six losses, hardly a winning stat in today’s light-it-up college football and rarely in the Big 12. On the ground, it’s run for 295 yards a game in its last three wins.

If Texas were the lost-and-found department, its shelves would be overflowing with all the lost items. But it did find itself a running back.

Warren had his coming-out party, running at will, albeit against one of the worst rush defenses in the land and scoring four touchdowns, one on a 91-yard touchdown sprint. His 276 yards in his first start represents the most yardage by a rookie in school history, a once-glorious history that includes Earl Campbell and Ricky Williams and Jimmy Saxton and Steve Worster.

And why wouldn’t he be great? He’s the son of the three-time Pro Bowl running back by the same name. The four-star running back out of Rockwall picked Texas over Texas Tech, Oklahoma State and Washington and certainly lived up to his billing with a spectacular debut. You should also know that in his 43 carries this year, he’s lost just 1 yard.

“He’s just a big, strong, physical runner,” head coach Charlie Strong said, “and you look at him, he can break tackles, he can run through people, and that’s why I wasn’t concerned going into this game”

It’s safe to say running back is not a Charlie Strong problem. Not with Warren joining sophomore stud D’Onta Foreman (out with finger surgery on Thursday) and promising freshman Kirk Johnson (hurt a knee).

“And Tristian Houston is good, too,” Warren said, not wanting to leave out the redshirting freshman.

Warren ran with style, a bruising runner who hurled defenders, broke tackles and ran away from defensive backs time and again to pace a dynamic running attack against a Tech defense that, to be honest, makes nearly every running attack look dynamic. Warren’s one of four Big 12 running backs to top 200 yards on the ground against the Red Raiders, joining Iowa State’s Mike Warren, Baylor’s Shock Linwood and Oklahoma’s Samaje Perine as well as whoever 7-5 Tech faces its upcoming bowl game.

Warren’s brilliant night may not be that much of a salve for Longhorn fans’ wounds, but he’s another building block, emblematic of Texas’ young talent infusion.

“Our running backs are good players,” Norvell said. “We’re talking about guys who are close to 250-pound backs. They can run in the open field, and it’s something we can build on.”

Texas still needs to find a reliable quarterback and better receivers, and the defensive line never materialized into the strength that Strong suggested it would.

But the backfield position is in good hands with the rapidly improving Foreman, an explosive Kirk Johnson and Warren, who raised eyebrows with his electric performance. He showed off his talent and justified the faith of the Texas coaches in the blue-chipper who allegedly flipped a coin on signing day before settling on Texas.

So is that a true story, Chris?

“I’m not going to talk about that,” Warren said. “High school’s done with.”

And so’s this season for all practical purposes. But Warren’s one more reason to be excited about the prospects for the future.