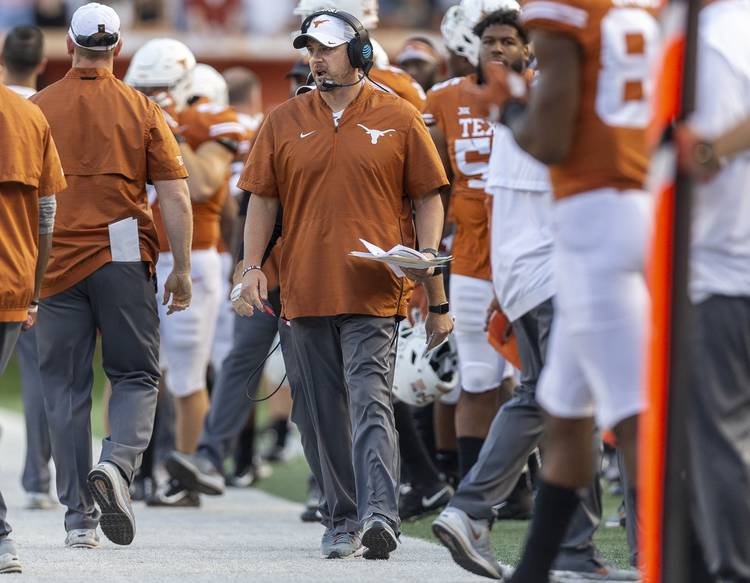 Texas head coach Tom Herman on the sideline in the second half of a Big 12 Conference football game at Royal-Memorial Stadium, Saturday, Nov. 3, 2018. [Stephen Spillman for Statesman]

West Virginia won on a dare.

Not with a wing or a prayer. That said, Texas now needs a supplication or two for some help if it’s to climb back into the Big 12 race.

Dana Holgorsen gambled late and walked away with a 42-41 win. And then acted like it wasn’t even a gamble at all. He decided to go for two even before the Mountaineers had gone into the end zone for six.

When quarterback Will Grier danced in for the 2-point conversion with just 16 seconds remaining, Holgorsen’s bold move paid off.

“No, it was an easy decision,” Holgorsen said. “If you put the fate of the game in No. 7’s (Grier’s) hands, I feel pretty good about it. We had that decision made before we even took the field. We’ve had this 2-point conversion in our back pocket all year.”

As a result, he has a crucial victory in his back pocket as well. A critical victory in this tightly contested Big 12 race with three games left, two of them in Morgantown. But Holgorsen wasn’t afraid of the moment.

That’s how you win championships. You don’t play it safe.

Tom Herman, on the other hand, went all conservative in the late going, eschewing a fourth-and-short gamble and settling for a 38-yard field goal to put Texas ahead by seven. Presumably a safe seven.

That’s not how it turned out, however, because Holgorsen has one of the best collections of offensive talent in the country. And when that’s true, no lead is safe. Or comfortable.

Grier & Co. ran and passed their way downfield and scored on a 33-yard pass to Gary Jennings Jr. with 16 seconds remaining. And one very important decision.

Texas got beat by a slightly better team. Sure, the Longhorns were short-handed on defense with the absence of three starters for almost the entire game. And they played like it; West Virginia scored on seven of their 10 possessions and lost the ball on downs at the Longhorns’ 20 on one of those other three. The Mountaineers punted twice, which means Texas never came close to stopping them.

The Longhorns had their own stars. Texas matched West Virginia pretty much score for score, and quarterback Sam Ehlinger played his butt off with an off-the-charts quarterback rating of 179.5, even higher than Grier’s.

So did a couple of guys who have been more part of the supporting cast this year like wide receivers Lil’Jordan Humphrey and Devin Duvernay and running back Tre Watson, who have somewhat been overshadowed by wideout Collin Johnson and tailback Keaontay Ingram. Those three had showcase performances.

“The silver lining is we play in the Big 12, and everybody plays everybody,” Herman said. “We’re not out of any race at this point. We certainly don’t control our own destiny. This was a tough pill to swallow.”

This game couldn’t have much more even.

Both teams totaled well over 500 yards. Both had the exact same 28 first downs. Both ran 75 plays each. Only eight yards separated the 300-plus passing yards.

But Texas was done in by the daring. And the Mountaineers dared a little more.

They were dead even for 59 minutes and 44 seconds. That’s when Holgorsen showed some chutzpah in the closing seconds at dusk instead of playing it safe for probable overtime. Grier ran it in with the defense concentrating on five receivers.

Herman had his chance earlier at the start of the fourth quarter. But facing fourth-and-1 at the West Virginia 21, he settled for a 38-yard field goal by Cameron Dicker and a seven-point lead with almost 10 minutes to play.

“I always give it thought,” Herman said, when asked about going for it. “I kicked myself. But I didn’t know the quarterback’s helmet was going to come off (on a previous series that ended inside the WVU 5, when Ehlinger lost his headgear on fourth down and Texas got nothing) A chance to go up seven with the wind in the fourth quarter, we felt pretty confident.”

That could be questioned because Texas rarely stopped West Virginia all day. The Mountaineers averaged 7 yards a carry, and Grier was .impeccable in the passing game.

Oddly enough, Herman usually loves to gamble. Why, he even went for it on a fourth-and-3 at the WVU 43 early in the second quarter and Ehlinger found Collin Johnson for a 26-yard gain. And he did so again on fourth-and-1 at the WVU 5 when Ehlinger appeared to run for a first until replays showed his helmet came off, ending the play before he had the necessary yardage gain.

In the end, the Mountaineers made one more play than the Longhorns, which frequently separates champions from the almosts.

Is Texas done? Very likely as a Big 12 contender, but nothing’s ever for sure in this topsy-turvy league. With their second consecutive loss, the Longhorns (6-3, 4-2) still have dangerous games left with Texas Tech and Iowa State.

They weren’t totally devoid of big plays, but rarely pressured Grier and didn’t have a sack or a takeaway.

Oh, Texas’ Malcolm Roach and Joseph Ossai rose up and stuffed runs on back-to-back plays inside the red zone to take over the ball on downs, but there were precious few moments like those.

“The combination of inside-outside zone with a stick draw and their great All-American quarterback and All-American receivers was a little bit too much for us to handle there at the end,” Herman said.

Especially if you’re not willing to gamble.

Golden: ‘Close’ doesn’t count for Texas, not with a road trip to Lubbock coming up