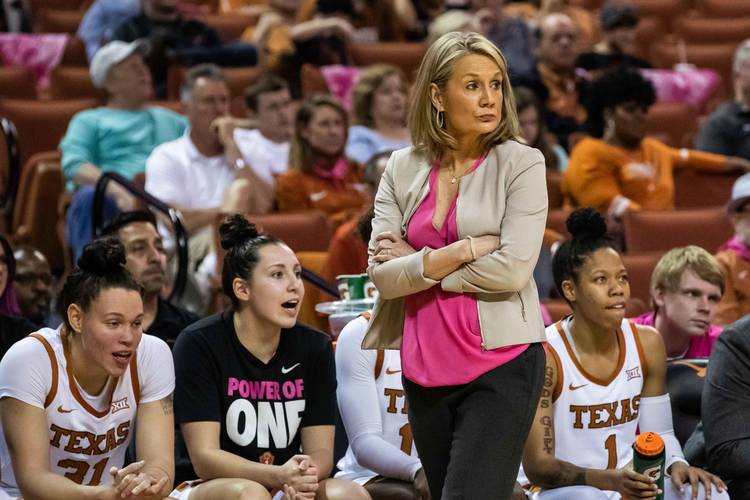 It’s time to scare Kim Mulkey over her morning coffee.

Time to deliver a message to the Baylor dynamo before her first Red Bull. Or maybe Mulkey eats nails for breakfast.

Regardless, Texas needs to step to the plate, be Texas for a change, pay market value or above and go hire a stud women’s basketball coach and make Mulkey go uh-oh. Or at least make one of the best 10 coaches in the land — no matter the gender — sweat a little. She’d probably even welcome the challenge.

We will all know if Texas is serious about Chris Del Conte’s demand that all his coaches compete at a top-10 national level and be in the legitimate hunt for championships when we see who he hires next after letting Karen Aston go on Friday. But admittedly it’s harder now because schools aren’t getting as much NCAA revenue, the price of oil (read: donors) has tanked, UT may have to shell out $1 million or more for seniors who just got an extra year of eligibility, and who knows if there will be a revenue-producing football season.

But swing for the fences, Chris.

Make top coaches like South Carolina’s Dawn Staley and Notre Dame’s Muffet McGraw and Stanford’s Tara VanDerveer turn you down. Chances are, none would give Texas a second look.

Geno Auriemma pulls down more than $2.4 million at UConn and ain’t leaving. Heck, Mulkey would be the ultimate prize, but she’s making Geno money, isn’t coming either and would lord it over the Horns forever that Texas pursued her.

But that shouldn’t stop Texas from trying to make a statement. An emphatic one.

You already made one by keeping an average Shaka Smart in Austin and saved $10.5 million in buyout coin to boot. Heck, letting Aston walk didn’t even cost Texas a cent. Apply that savings to a new hire.

The announcement that Texas was moving on from Aston was no surprise, however bad the optics.

For all practical purposes, she was fired a year ago.

Del Conte and the Texas administration effectively made the decision to change directions a year ago when they let Aston enter what would be her final season here with but a single year left on her contract.

Such policy rarely happens in big-time sports unless the bosses have already lost confidence in the coach, and this was the case here.

Aston’s final-year agreement expires in August. In letting her contract lapse, Texas basically fired her a year ago, barring a major turnaround in the fortunes of a basketball program that had moments of big success but had faltered of late, especially in recruiting, and had fallen far distant of powerhouse Baylor.

Del Conte clearly saw the lack of progress and moved on.

I’d love to see Mississippi State’s Vic Schaefer walking the Erwin Center sidelines, but he’s yanking down $1.6 million. And I think he’d listen, but the former Texas A&M assistant already has his program competing at a national title level.

So maybe Del Conte tries to lure a Jeff Walz from Louisville, where the 48-year-old has been to two Final Fours, been a national runner-up, and has twice reached the Elite Eight and four Sweet 16s. He’s hardly a consolation price.

No one expects Oregon’s Kelly Graves to walk away from what he’s building in Eugene, but it’s worth a phone call.

It’s much harder for Texas to money-whip any coach it desires. Salaries have grown that much.

There’s work to be done, Chris.

I bet it doesn’t take him long.

It’s undeniable that Aston’s program was trending backward while Mulkey, her primary foil, had built such a dynastic program that the Lady Bears were denied a chance of Mulkey’s fourth national championship only by the coronavirus crisis that has enveloped the country and shut down sports.

The pandemic may have inadvertently saved Smart’s job. But it couldn’t save Aston even though she had a much better Longhorns résumé than Smart by leaps and bounds. She just didn’t have the steep buyout figure or the scrutiny of a men’s basketball franchise.

The poor optics of retaining one and pink-slipping the other are obvious and are sure to anger many women who rightfully only want to be treated fairly and equitably. Neither was getting the job done lately, however.

Aston’s last team did finish third in the Big 12 with an overall record of 19-11 and an impressive upset of No. 1 Stanford. And she’s just as likable and classy a person as Smart, if not more so. But she went 1-18 versus Mulkey and was just 32-47 against ranked teams.

Overall, she had much more success on the national level as well. Her teams reached the Elite Eight once and the Sweet 16 four times with a 9-6 overall record in the NCAAs while Smart has yet to record an NCAA Tournament victory here and may well have missed the field for the third time in his five seasons.

Recruiting, however, had also begun to go south on Aston.

She had recruited like gangbusters, signing 14 McDonald’s All-Americans, but never seemed to develop them or turn them into offensive dynamos. She also has nothing to show for her  2017 class of three ESPN 100 recruits because the nation’s No. 1-ranked forward (Rellah Boothe), No. 1 guard (Chasity Patterson) and outstanding guard Destiny Littleton all transferred.

Furthermore, she couldn’t hang onto 6-7 center Sedona Prince out of nearby Liberty Hill — the eighth-ranked overall recruit in 2018 — after Prince lodged complaints of medical neglect following a leg injury and transferred to Oregon.

Maybe Graves could bring her home, too. Hey, ask for the Bru McCoy waiver. Worth a try.

Del Conte said in a statement that it was “an extremely difficult decision,” but added that the administration has “determined to move in a different direction with our continued goals to work to contend for conference championships and NCAA elite status.”

As of this writing, all of Texas’ spring sports like track, golf, tennis, baseball, softball and rowing are moving in that direction.

Let’s see if he means it for basketball.