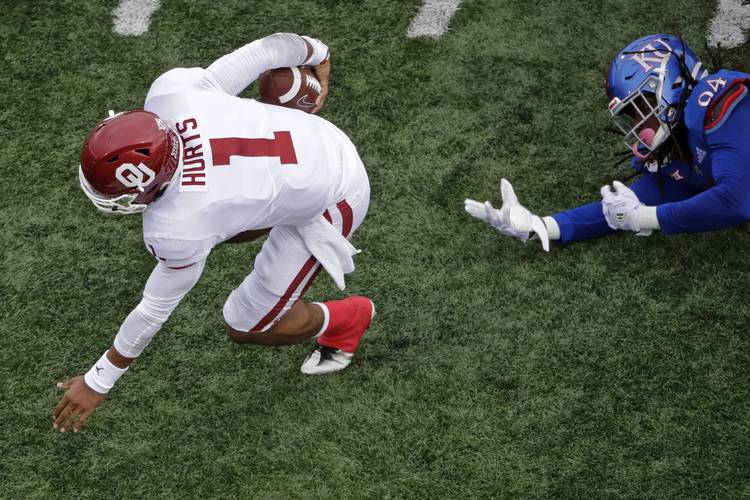 Oklahoma quarterback Jalen Hurts (1) gets past Kansas defensive end Codey Cole III (94) as he runs the ball during the first half of an NCAA college football game Saturday, Oct. 5, 2019, in Lawrence, Kan. (AP Photo/Charlie Riedel)

Going 4-1 in the NFL allowed us to cash last week and move to 22-23-1 since the start of the season. We’d be back at .500 for the year, but Texas pushed at -11 last weekend over West Virginia. Let’s try to put our college football woes in the rear-view mirror with big games over the upcoming weekend.

Oklahoma -10.5 over Texas: The Longhorns needed a flawless performance from Sam Ehlinger to stay within a score of LSU. The Longhorns’ defense is beat up and still an issue entering a game against the best offense on the schedule. Don’t expect it to be a blowout because Oklahoma hasn’t covered in this game since 2012. Give me the Sooners to pull away in the fourth quarter.

Iowa +4 over Penn State: Iowa is at home and fresh off a loss despite the defense giving up just 10 points. Penn State usually lays an egg once or twice on the road during the Big Ten schedule and this is the perfect spot for a low-scoring affair. Iowa is a tested team with games against Iowa and Michigan. This is Penn State’s first challenge on the schedule.

Duke -17.5 over Georgia Tech: Does Georgia Tech miss option football yet? The Yellow Jackets are 1-4 in the first year this decade without Paul Johnson at head coach. The only win came against Charlie Strong’s South Florida squad. Duke is pushing toward early bowl eligibility and has scored more than 40 points in four of its five games.

South Carolina +24.5 over Georgia: This bet is about Georgia’s style of play more than any faith in South Carolina. The Bulldogs keep it simple with an offense built around the run and controlling the clock. South Carolina is fine to keep this a low-scoring affair for four quarters. Georgia wins easily, but not by four touchdowns.

Kentucky -7 over Arkansas: Kentucky is a 10-point favorite if Arkansas doesn’t push Texas A&M two weeks ago. That performance was an outlier. Chad Morris’ squad gets humbled on the road against a solid Kentucky squad that needs this win to help its bid to reach a bowl game. Both teams are coming off an open week.

Tampa Bay +2 over Carolina: Tampa Bay already beat Carolina by six points this season. This is a perfect example of recency bias in sports betting. The Buccaneers are coming off a loss to the Saints on the road, while the Panthers scratched out a home win over the Jaguars.  I don’t see an eight-point difference from the previous meeting for the Panthers.

Philadelphia +3 over Minnesota: I also love the over in this game. Give me Carson Wentz and this Eagles offense to score points against a solid defense. Kirk Cousins doesn’t provide the same sense of security, even at home. Philadelphia can take away the run game and make this a passing contest. That favors the Eagles.

Miami +3.5 over Washington: Do you really trust the Redskins to go on the road and win by more than a field goal? I don’t, even if it is against the Dolphins. Miami knows this contest is its best chance to win a game this season and the players want a victory.

New York Jets +7 over Dallas: The Cowboys came back to earth in games against actual NFL competition. I don’t expect Dallas to drop a third consecutive game, but I do expect New York to stick around at home with Sam Darnold back at quarterback. This line was +9 before Darnold’s announced return from illness.

Los Angeles Rams -3.5 over San Francisco: This is the game of the week. San Francisco can build a bigger lead in the NFC West with a road win against the Rams. Los Angeles needs this game more with Seattle also off to a hot start in the division. A short week won’t help the 49ers.

Golden: Hurts will soon discover there’s nothing quite like a Texas-Oklahoma rivalry game