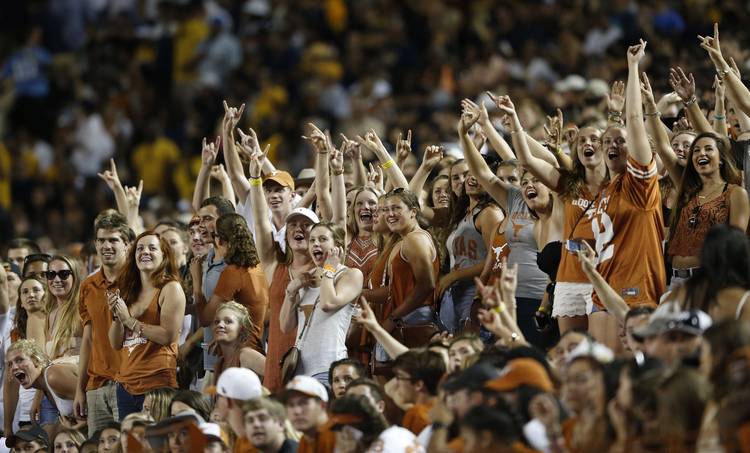 Texas fans cheer during the third quarter of the Cal game at Royal-Memorial Stadium on Saturday, September 19, 2015. JAY JANNER / AMERICAN-STATESMAN

The numbers prior to Texas’ home opener weren’t all that surprising. On Wednesday of Rice week, UT officials announced that 15,000 tickets were still available. OK, it’s Rice.

Last week’s numbers, though, got my attention. More than 11,000 tickets were still available mid-week for California?

This week’s announcement should set off alarms inside the UT athletic department. As of Wednesday, approximately 15,500 tickets were still available for the Big 12 opener against 24th-ranked Oklahoma State. And more than 4,500 tickets remain on the Texas end of the Cotton Bowl for the Oklahoma game.

People are indeed “voting with their feet,” as interim athletic director Mike Perrin said at his introductory press conference. This ticket-buying malaise didn’t happen overnight, though. Texas football attendance is down 11.8 percent from what it was in 2012.

This is something every administrator should be worried about. That includes you, coach Charlie Strong. You, too, President Gregory L. Fenves.

So what’s happening? Why have people cooled on the Longhorns? Surely it can’t be because Jet Pack Guy turned people off or, my personal favorite excuse, “the noise is too loud!”

In many respects, Texas football is caught in a perfect storm. The Longhorns are 7-9 under Strong, and for the first 14 games, the offense was boring. Quarterback Jerrod Heard may have changed all that, but Saturday’s game is only his third career start.

Why come out to Royal-Memorial Stadium, fight the parking hassle, the crowds and the heat when you can watch Heard run wild at home? In high-definition, no less. Beer at the stadium is $8. An entire six-pack can be found for $6. I asked for a friend.

Against Rice and Cal, Texas’ average home attendance was 89,013. That’s the lowest total since 2007, the final year before the north end zone expansion goosed the overall capacity.

To be fair, college football attendance is slipping nationwide. UT, just like many schools, can’t figure out how to get more students to the game on time — or into the stadium at all.

Oddly enough, this isn’t a problem at Texas A&M. The Aggies averaged 103,402 fans for their first two home games in the sparkling, renovated Kyle Field. That program has gone 11-5 since the start of the 2014 season and has yet to win a division title since joining the SEC. Fans seem to find their way to College Station in droves.

Texas officials want to expand the south end zone of DKR, mostly by adding suites and premium seating, not more bleachers. That expansion project theoretically includes a vast overhaul of the football complex.

The south end zone expansion won’t happen for years, though. Fenves has indicated he wants to secure a new basketball facility first. The Erwin Center will be razed to make way for Dell Medical School expansion. A new tennis facility must also be built on the east side of Interstate 35.

It’s doubtful Perrin can spearhead a fundraising campaign as the interim AD. If Fenves takes the interim tag off, then major donors will listen. Nobody wants to give to a capital campaign without knowing whether UT athletics has clear vision and leadership.

Most of all, Strong needs to start winning. Football ticket sales are a chief revenue driver for one of the biggest athletic departments in college sports. If ticket sales continue tapering off, Texas has a serious problem.

It’s unfair to place so much pressure on one players’ shoulders, but the Longhorns need Heard to keep developing. That’s what sells tickets.

Here's a look at the average home attendance at Royal-Memorial Stadium since the national championship season in 2005.