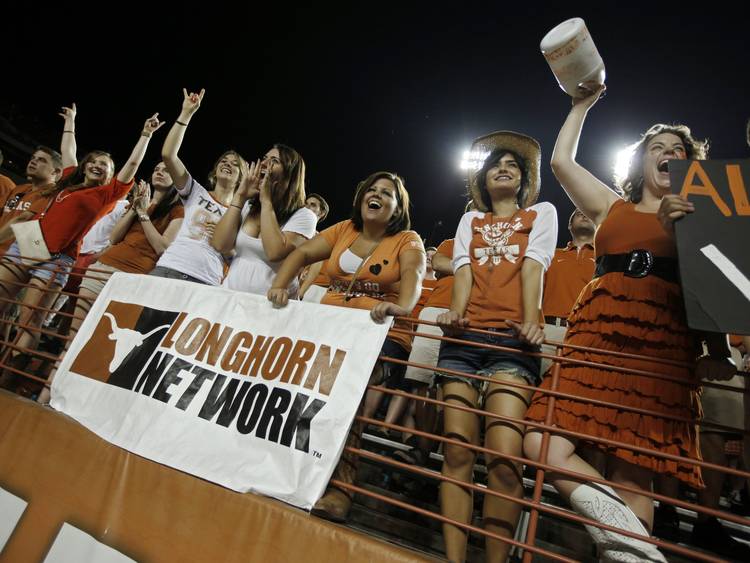 University of Texas fans cheer on the Longhorns as they play the Rice Owls on September 3, 2011 at Darrell K. Royal-Texas Memorial Stadium in Austin, Texas. This was the debut game for the new Longhorn Network, a partnership between the University of Texas at Austin and ESPN. (Erich Schlegel/Getty Images)

Your trusty scribe is a cord cutter. Proud of it, too.

TV is not what it used to be. Being that I’m of a certain age who remembers when there were only three major networks, “Bonanza” reruns and no remote control, well, suffice to say TV watching in the 21st century is exhausting.

Late this summer, AT&T thought it prudent to raise my U-verse cable bill up to $190 per month after our two-year contract expired. Uh, no thanks. Finally, after some prodding and serious hand-holding, we dove headfirst into the world of online streaming TV.

You’ve got incredible choices in this digital utopia. We ultimately selected PlayStation Vue as our streaming app of choice mostly because it was affordable and the only major platform that carried Longhorn Network. Alas, Sony announced Tuesday it was shutting down PlayStation Vue in January 2020 and would “remain focused on our core gaming business.” Hulu and YouTube TV do not carry Longhorn Network, at least not at the moment, anyway.

What’s a cord cutter supposed to do now?

Of course, anyone that’s followed LHN’s lifespan knows that ESPN has chopped down the amount of original programming considerably over time. At this point, LHN is merely fulfilling its contractual obligations to show mostly live UT sporting events and coaches shows.

Online streaming is the future. Check that, it’s the here and now. In AT&T’s third fiscal quarter just announced, the company reported losing 1.1 million U-verse and DirecTV subscribers. People may not be totally cutting the cord, but they’re leaving AT&T.

When I called U-verse to try and negotiate a better deal, it didn’t go well. I was told by someone in the “retention department” that it was her belief the company was pushing people toward AT&T TV Now, the company’s online streaming app, and away from traditional cable and satellite. Oh, and no, I could not get a cheaper price for U-verse.

Longhorn Network is available on AT&T TV Now, U-verse and DirecTV. It’s available on Dish satellite, Cox, Verizon FIOS, Spectrum and Grande Communications cable packages, too. There may be some other one-offs, but those are the major traditional platforms.

To them, AT&T is “what my parents use.” Yuck. They’re all about Hulu, YouTube TV, Sling TV or Philo. I was all about Vue, but now that’s going away.

Nielsen released a TV survey in March that said only 36% of respondents liked their cable or satellite provider. In September 2018, the company estimated that 68% of households had TVs capable of an Internet connection.

“We are always talking to our distributors about our networks and services, but there’s nothing to announce at this time,” an ESPN spokeswoman said Thursday.

From a sports watching perspective, these online services are fantastic. You get ESPN, ESPN2, ESPNews, SEC Network, ACC Network and Big Ten Network. You get the Fox channels, including Fox Sports Southwest. I’ve had no problems watching any sports event I wanted.

But unless you plan on streaming through AT&T TV Now, you won’t get Texas volleyball, men’s and women’s basketball games and “Rewind with Tom Herman.”

We’ve definitely entered the next phase of television consumption, on this there is no doubt. Texas officials should get with ESPN and think about how they want fans to consume LHN going forward.

ESPN has never publicized LHN’s ratings. Network representatives have told me over the years the only programming that registers are live events, mostly games.

Yes, you can watch Longhorn Network on ESPN.com. Ah, but there’s a catch. Right now, you must first enter your cable/satellite login credentials to watch live.

The network’s new ESPN+ platform, which costs $4.99 per month, is not the best answer, either. ESPN+ offers Big 12 Now, the new channel conceived for the eight remaining league schools, not Texas and Oklahoma. The Longhorns are likely to show up on ESPN+ when they are the visitor, not the home team. Two UT men’s basketball games are scheduled for ESPN+ this season — at Oklahoma State (Jan. 15) and at TCU (Jan. 29).

So how exactly did I cut the cord? First, you need good Internet. AT&T lured me into upgrading to its fastest Internet package when I started that two-year bundle.

In late August, The Wall Street Journal had an article headlined, “You (Probably) Don’t Need the Internet Speed You’re Paying For.” I told the Mrs. about this revelation and wanted to throttle down the speed. Guess who won? Yeah, we still have the fastest internet AT&T offers.

We have smart TVs, but we ended up buying Roku devices for each TV in the house. Your smart TV must still be connected to the Internet somehow. Then, it was a matter of downloading various apps, and we were surfing in no time.

All in, Internet plus TV, I’m paying about $165 per month. By dropping to a mid-tier internet speed, you could probably do better on price. Also check the prices for an Amazon Fire TV Stick. They might be equal to or slightly cheaper than Roku.

Again, that’s what we pay currently to have Internet and watch PlayStation Vue, which is an all-in-one app. If you just wanted Netflix or maybe these new platforms like Apple TV+ or HBO Max coming soon, you could get out cheaper.

Out here in suburbia, we’ll probably switch to YouTube TV whenever Vue disappears. Or maybe that’s because Joe Buck beat that sponsor into my head during the World Series. But that means losing LHN, at least for now.

Unless ESPN gets LHN onto more streaming platforms, there may come a day not that many see it at all.