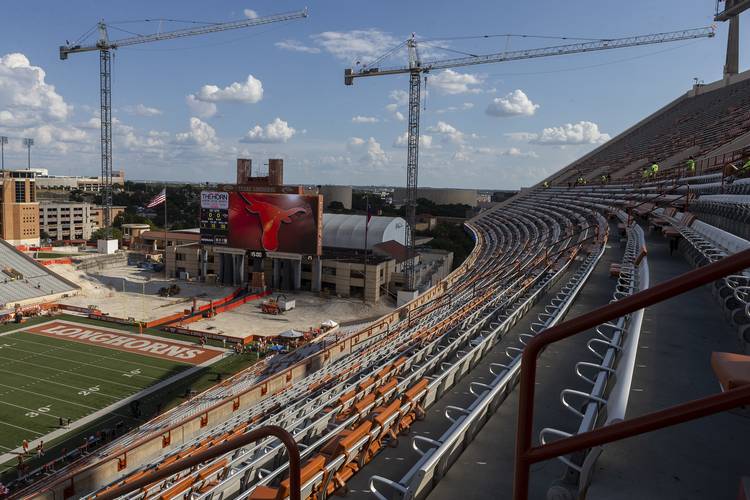 Texas athletic director Chris Del Conte plans on greeting UT students at 5:30 a.m. Saturday with donuts. Better fill up and rev up as ESPN’s “College GameDay” makes its first appearance in Austin since 2009.

Even at 5:30 in the morning? “Damn right. And tacos, baby,” Del Conte said. “We’ve got to make sure we have a good crowd. My wife’s like, ‘What the hell are you doing?’ Gotta get out the tacos.”

Mapping out all the logistics for a 124-person TV crew can’t be easy. School officials thought of everything, even where to get snazzy cowboy boots should the need arise. “Allens Boots. Done,” said Drew Martin, Del Conte’s right-hand man responsible for getting everything secured.

“GameDay” will spotlight crazed Longhorns fans on the LBJ Lawn and preview Saturday night’s top-10 matchup between LSU and Texas. What ESPN should be highlighting is how Texas athletics has started a half-billion worth of facility projects without taking on any added debt.

Come again? What are we talking here, U.S. treasuries or LSU Tigers? Interest in Sam Ehlinger or interest rate swaps? Bean counters everywhere should be throwing up double-fisted “Hook ’ems” how Texas athletics is taking a pay-as-you-go approach these days.

What’s in Bevo’s wallet? Lots of cash. With new football, basketball, baseball, swimming and track projects all on the runway.

That dusty construction zone in Royal-Memorial Stadium’s south end zone is the first major step in a $175-million renovation project. Athletics was responsible for $125 million; UT regents kicked in the final $50 million. That secondary pool of money will come back to the regents through normal operations.

Del Conte found eight families willing to give $10 million each, money used primarily to rebuild the football building as part of the project. Each member of the so-called “Founders Club” gets one of the new eight suites in the south end zone. Del Conte went around asking for $10 million without so much as a pitch book or artist renderings.

“Some were like, ‘Have you lost your mind?,’” Del Conte said. He now has a pitch book with images should anyone ask. “We didn’t even have this designed,” he said flipping through it. “We were just talking about what we needed.”

The south end zone will feature 94 loge boxes ranging from $150,000 to $500,000. Del Conte said 92 are already spoken for. Finally, there are 800 additional club seats left to be sold. The schools plans to start selling those this month, with a target of being sold out by Halloween.

In Del Conte’s mind, the $125 million is already accounted for, but he’s refraining from using the term “paid off” until all the checks clear. “We’re just putting the pedal to the metal,” he said.

When the dust settles, Royal-Memorial Stadium will probably still have a listed capacity of more than 100,000. Texas can’t drop down to five figures, lest Texas A&M fans would have a field day. But it could be fractionally less than the previous 100,119.

“Chris is amazingly talented, an effective leader and a great fundraiser,” UT President Gregory L. Fenves said in an interview this week. “He’s beloved in Longhorn Nation and people are willing to invest in the program and Chris Del Conte.”

Fenves said this was always the plan — start and finish a major football construction project without adding long-term debt to the balance sheet.

Texas is still paying off the north end zone project finished more than a decade ago. The Horns will be paying on that probably long after Fenves and Del Conte leave, too. According to the most recent audited figures, Texas athletics had a principal and interest payment of $17.2 million due in 2019. The debt service stretches all the way to 2044. Long-term debt was simply how you paid for things 20 years ago.

Bond holders have no reason to worry. The university will always have its “AAA” rating, which is the highest possible. With Big 12 TV contracts, merchandise and ticket sales, the athletic department now projects to generate $200 million in revenue each year for the foreseeable future.

“The debt is what it is. We’re going to pay it off,” Fenves said. “Do you buy down debt earlier than scheduled to save on future debt service? Right now, I think we’re managing the debt well. I’m comfortable.”

That bloated debt schedule is a driving force behind Fenves’ decision to partner with a private entity and build a new basketball arena. Oak View Group will build and maintain a $338-million facility that will be adjacent to UT’s track and soccer stadium. Basketball capacity will be about 10,000.

Texas officials like to gloat “we’re getting a new arena for free,” and generally speaking, it’s true. UT is responsible for realigning Red River Street and rearranging underground utilities, but those are minor costs in the grand scheme.

Texas still has not finalized a contract with Oak View even though the official announcement was made on Dec. 20. Del Conte asked groundskeepers to start moving several huge trees out of the parking lot so there’s a feeling of progress. It’s thought that major construction will start next spring.

“We’re still working on it,” Fenves said of the contract. “We’re very pleased with the progress.”

The football stadium project is essentially paid off. The basketball arena project is being paid by someone else. The new Texas Athletics Hall of Fame, which cost $17 million, was paid off through a series of donations. This is championship-level fundraising.

“It’s just doing your job,” Del Conte said. “If we expect greatness from our football program, which we do, then I think all of us need to have a part in making sure that happens. Whether you buy a season ticket, whether you buy a T-shirt, whatever it may be, you are a valued member of our program.”

It’s not just high-level donors, either. Del Conte answers to students who drug him across the coals on Twitter last Saturday during the Louisiana Tech game. Judging by the complaints, security officials were a tad overzealous in crowd control on the east side.

“It’s my 4th year at Texas and I go to the bathroom and I can’t get back into the student section,” one student tweeted to Del Conte. “DO BETTER.”

Del Conte responded by tweeting back, “I agree … sending someone to talk with security staff.”

These are his people. With two major facility projects financially secured, Del Conte can now spend time on all the little stuff.

“I don’t know. I just know that I work for (the fans),” Del Conte said. “I report to the president, but I work for every Longhorn and I firmly believe that.