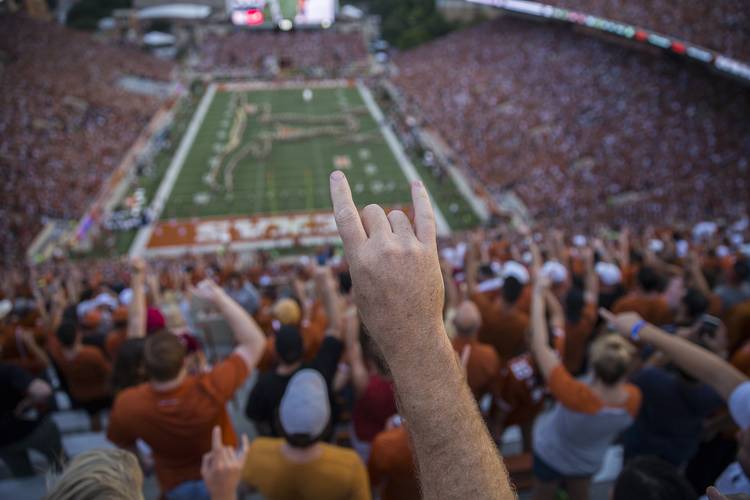 Dozens of rolled-up notes that were stuffed in bottles and thrown into the digital ocean wash ashore in my inbox. Many inform me that the Texas-LSU game on Sept. 7 is some watershed event.

Here on my metaphorical desert island, I wasn’t aware.

Anyway, a few weeks ago, I drifted over to Stubhub to see how the secondary ticket market was treating this upcoming scrum. Club seats were being offered for $2,000! Seats on the 50-yard line were $1,500. For one game. In early September.

So this got me thinking, and since we all do our best thinking on Twitter, I posed a simple query: Would you, a Texas season ticket-holder, skip the LSU game if you could sell that ticket and cover your cost for the year? The answers were, like UT football this decade, all over the map.

“No. Nope. No way,” barbecue jedi Grant Pinkerton tweeted back.

“Have you lost your mind?” L’Carpetron D. responded.

“If you’re worried about recouping money on your season tickets, you probably shouldn’t have bought them to begin with,” Todd McCarroll said in sick-burn style.

The LSU game is big, no question. It’s the biggest non-conference home game since No. 1-ranked Ohio State strolled into Austin in 2006. That Notre Dame game in 2016? Well, Texas was coming off a losing season the year before. The only reason it’s memorable was because of the crazy 50-47 score and wild double-overtime finish.

“Swoopes, dancing … for the win… Texas is back, folks!” ESPN’s Joe Tessitore screamed when Tyrone Swoopes dove into the end zone. Eh, not so much. The Horns finished 5-7.

This year, both Texas and LSU will be ranked at least in the top 15. This will be a measuring-stick game for both teams. The winner will be elevated into the CFP discussion.

Yes, for some, hawking their LSU tickets is a no-brainer.

“Can definitely understand how recouping a season’s worth of $ to be there for the rest of the games can be the case for even the truest of fans,” Suneet Singh wrote.

“For me, getting the big games at face (value) make it worth it. But if I could sell my ticket for over a grand I’d have to seriously consider it,” Steve Burfi said.

“No. Somewhat tempting as a newlywed, but no,” Mack wrote. Heaven help Mrs. Mack.

Personally, I like Matthew Ziemnicki’s approach. “$20,000 to sit next to me. Lemme know if you are interested. Worth every penny to watch a game with.”

A Stubhub representative reached out with some pretty interesting information. As of this week, the average ticket price on their website for the game is $455. The current get-in-the-door price is $400. As of midweek, Stubhub had 1,455 tickets available.

Where are the buyers? Stubhub says 48% of the buyers are from Texas while 30% are from Louisiana. And get this: Stubhub says there have been ticket buyers from eight different countries. Amazing.

“I’ve been selling blood all summer to afford my ticket to the game. (Just kidding) of course,” @Kcastillo26 tweeted. Are you?

“I literally bought season tickets just for this game,” Jim Glover wrote. And for that, Texas athletic director Chris Del Conte thanks you and will tweet you a fist bump.

“So the plan is to NOT go to LSU so you can afford to see LaTech, Okie State, both Kansases, and an 11 a.m. Black Friday kick with Tech. Sure. Makes sense,” Chris Lippincott tweeted.

This topic fascinates me. It’s a truly difficult financial choice.

Let’s say you sit in section 5, close to the 50-yard line. One season ticket this year cost $550. You also must pay an additional required donation to the Longhorn Foundation, but some are grandfathered in at dirt-cheap prices. I know some fans who have no Foundation requirement because they’ve been coming so long. New ticket-holders had to pay $3,500 this year, bringing the total cost for one seat to $4,050.

Stubhub has two seats in section 5, row 2 listed at $1,777.50 each. Now, let’s say someone bought that ticket. That would cover almost 45% of the initial investment. Not terrible.

There are seats available on the west side upper deck for more than $600. Somebody is offering two tickets in section 128 on the east side for $1,270.58 each.

Granted, it’s possible these tickets are owned by local ticket brokers, not true fans. Then again, if you put a crazy bid out there and somebody bites, why not?

All that said, if you’re buying season tickets on the sheer prospect of turning a profit on games like Kansas and Kansas State, good luck with that. The LSU ticket is the only real moneymaker on the schedule this season. Sorry, Oklahoma State and Texas Tech fans.

It’ll be interesting to see how the secondary ticket market evolves when the Royal-Memorial Stadium expansion is complete in 2021. At that point, Texas will have new clubs, new suites and totally new seating options. And that means more options will be available on the secondary market.

Alas, as Drew Schackmann noted, “Texas is back, Brian. Haven’t you heard?”