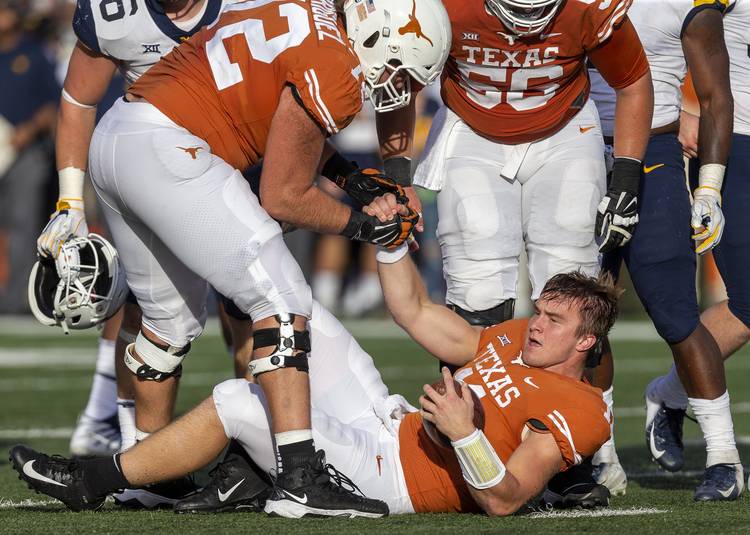 After that tough loss at Oklahoma State last week, It was imperative for Texas to bounce back Saturday at home.

Show some resilience. Answer the bell.

Texas didn’t get there.

The ol’ college try was not good enough. The 42-41 loss to 13th-ranked West Virginia before a Royal-Memorial Stadium crowd of 100,703 will hurt more this week because Texas couldn’t close it out against a good team. Tom Herman will undoubtedly think about his decision to kick a field goal and not go for it on fourth-and-1 from West Virginia’s 21-yard line with a 31-27 lead and 9:38 remaining.

“I always give it a thought (about going for it),” Herman said afterward.

When Texas fans look back on this game, they’ll think about late leads that got away, Sam Ehlinger’s goal-line first down that wasn’t and Will Grier loping into the end zone to send the home folks home with a third single-digit loss. The Horns should have taken more advantage of the Mountaineers’ 14 penalties for a whopping 120 yards, including a first-half ejection of starting left tackle Yodny Cajuste, their best offensive lineman.

The Horns (6-3, 4-2 Big 12) now must win in Lubbock next Saturday or suffer their first three-game losing streak of the Herman era and their first since that bad ending to Charlie Strong’s three-year tenure. After they came up short in Stillwater, there was some concern that it was the start of a downward Big 12 turn in the most important part of the season. Those concerns are now a full-blown reality.

No one cares that they’ve lost back-to-back games by a total of four points, just that they lost.

“Obviously to have his happen and the way that it happened is a tough pill to swallow,” Herman said. “But again, there’s no rest for the weary in this league.”

That 6-1 start, 4-0 conference record and No. 6 national ranking feels like forever ago. West Virginia quarterback Will Grier guided his team to a win in the closing seconds in a gutsy performance; he was probably less than 100 percent after leaving the game briefly on Malcolm Roach’s horse collar tackle at the end of the first quarter. And the Mountaineers’ running game took center stage against a porous UT defense that gave up a season-high 232 yards on the ground, an average of 6.8 yards per tote.

Texas led by seven points two different times in the fourth quarter, but the defense that failed to produce a takeaway or sack couldn’t hold it. Grier did what he had to do, and for the second week in a row, the Horns were felled by a quarterback keeper in the red zone. Grier’s game-winning 2-point run on Dana Holgorsen’s roll of the dice might as well counted for a hundred.

“I think anytime you go through a couple-game stretch the way that we’ve gone through, you’re concerned,” Herman said. “I mean, that’s our job as coaches. I’m concerned that we gave up a sack and we didn’t convert on fourth-and-1. There’s a lot to be concerned about on both sides of the ball.”

Meanwhile, West Virginia (7-1, 5-1) remains entirely in the mix for the school’s first-ever Big 12 title though the Mountaineers obviously still have some work to do, including the regular-season finale at home against Oklahoma on the day after Thanksgiving. And what about Holgorsen’s call to eschew overtime in favor of a win-or-lose 2-point conversion?

“It was an easy decision,” he said.

I wrote earlier in the week that this was a huge gut check for the Longhorns, and they just took another big blow to the solar plexus. It’s a winning business. Close losses don’t count in this league. Moral victories need not apply.

Now it’s on to Lubbock, where winning has never been easy.

Bohls: Texas wasn’t done in on a wing or a prayer, but by the Mountaineers’ dare