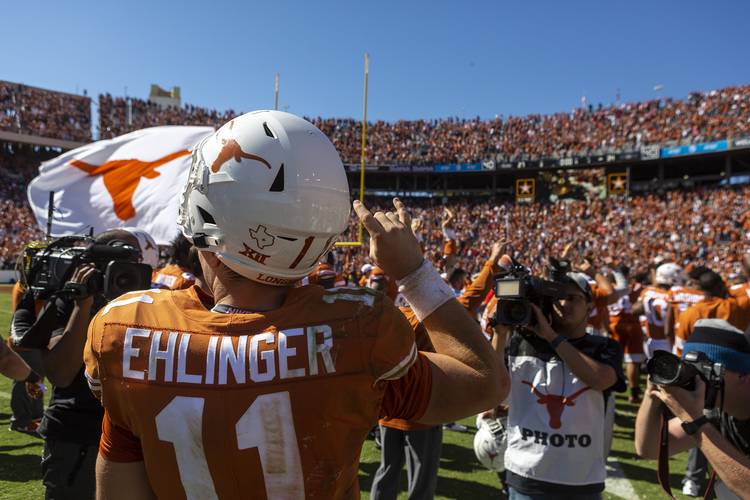 Texas quarterback Sam Ehlinger (11) stands or the eyes of Texas after falling to Oklahoma 34-27 during an NCAA college football game at the Cotton Bowl in Dallas, Saturday, Oct. 12, 2019. [Stephen Spillman for Statesman]

DALLAS — It was all on Sam Ehlinger.

Sometimes that’s enough, but against bloodthirsty Oklahoma, the best tackle football player at the University of Texas can’t do it all himself.

The Sooners pummeled the Longhorns quarterback all day long — nine sacks for minus-56 yards and a half-dozen or so knockdowns. Oklahoma’s new defensive coordinator Alex Grinch had a few wrinkles in his game plan, but nothing extravagant. His guys simply beat Texas’ blockers consistently. Ehlinger said the Sooners played fast and stars like Kenneth Murray and Neville Gallimore proved to be a problem in the Texas backfield for most of the afternoon.

“To play the way we need to play, we have to affect the quarterback some,” said Oklahoma coach Lincoln Riley. “Sam is too good of a player. (They obviously have) talented guys all over the edge and a pretty experienced offensive line. If you don’t do that, then it’s just going to be easy pickings for him.”

Texas came up short, but it wasn’t Ehlinger’s fault. He’s box office, a marquee player who doesn’t shy away from the responsibility placed on his shoulders.  His final numbers in his fourth start against the Boomers  — 25 completions in 37 attempts for 205 yards — were nowhere near what they should have been because of uncharacteristic drops in the receiving game and those countless breakdowns in his protections.

Ehlinger was held without a touchdown pass for the first time this season and only the third time in 25 career starts. In one of those games — against Baylor last season — he left after only five passes because of injury.

He offered up no excuses and neither did his coach.

“We knew what we were up against,” said Tom Herman.

Each gave the better team credit. Texas spanked Georgia in the Sugar Bowl because the Horns were the more physical team. Oklahoma won Saturday because it held the edge in physicality.

Try as he might, Ehlinger couldn’t lift up his teammates this time. They admittedly didn’t give him enough support.

“I wouldn’t want anyone else as my quarterback,” said safety Brandon Jones. “He does a tremendous job of just being that physical  leader. That guy, no matter what,  if he’s hurt or he’s going to play through it, he just want really wants to  rally the team at all times.  I think he just really does a good job of putting the team on his back.”

One year after he sent Kyler Murray home with an L, Ehlinger found himself on the business end of a 34-27 score as his counterpart, Jalen Hurts, took top billing with a massive 366-yard, three-touchdown performance in his first and only appearance at the Cotton Bowl.

It was a classic case of a final score not telling the full story. Texas played catch-up ball for most of the day and aside from a 10-10 tie that lasted a grand total of 63 seconds before the Sooners re-established command on Hurts’ 51-yard touchdown pass to CeeDee Lamb, the latest Horn-crushing wideout off Riley’s assembly line. Texas crept close on Ehlinger’s short touchdown run late, but could never put the Sooners behind the eight ball.

Ehlinger played admirably, but he couldn’t beat an entire Oklahoma defense by himself.  His receivers had more drops than the guy working the grease pit at the Fletcher’s Corny Dog stand and the blockers had no answers for linebacker Kenneth Murray, a future first-round NFL pick who played with an intensity reminiscent of OU forefathers like Brian Bosworth and Roy Williams.

The Longhorns didn’t have to play perfect ball to beat the  the nation’s sixth-ranked team, but their wideouts couldn’t show up with Parkay dripping from their fingertips, either. From my unoffical count, there were six drops of catchable passes, including a massive third-quarter flub by sophomore wideout Brennan Eagles, who left a perfectly thrown 40-yard bomb from Ehlinger slip through his hands with Texas trailing 17-10.

Texas played well in its home loss to LSU, but the Horns didn’t bring their best performance to Dallas. The effort was there, but there were not enough special plays. Several little mistakes added up to a loss in the biggest game of the season.

“I think that what makes us hurt the most was we didn’t play our best,” Ehlinger said. “We had opportunities to make plays and we didn’t make them. And then we shot ourselves in the foot at times.”

Their quarterback took them to special places last season and will do so again but days like this are a reminder that Ehlinger can’t always be a one-man gang and get wins against quality opposition.