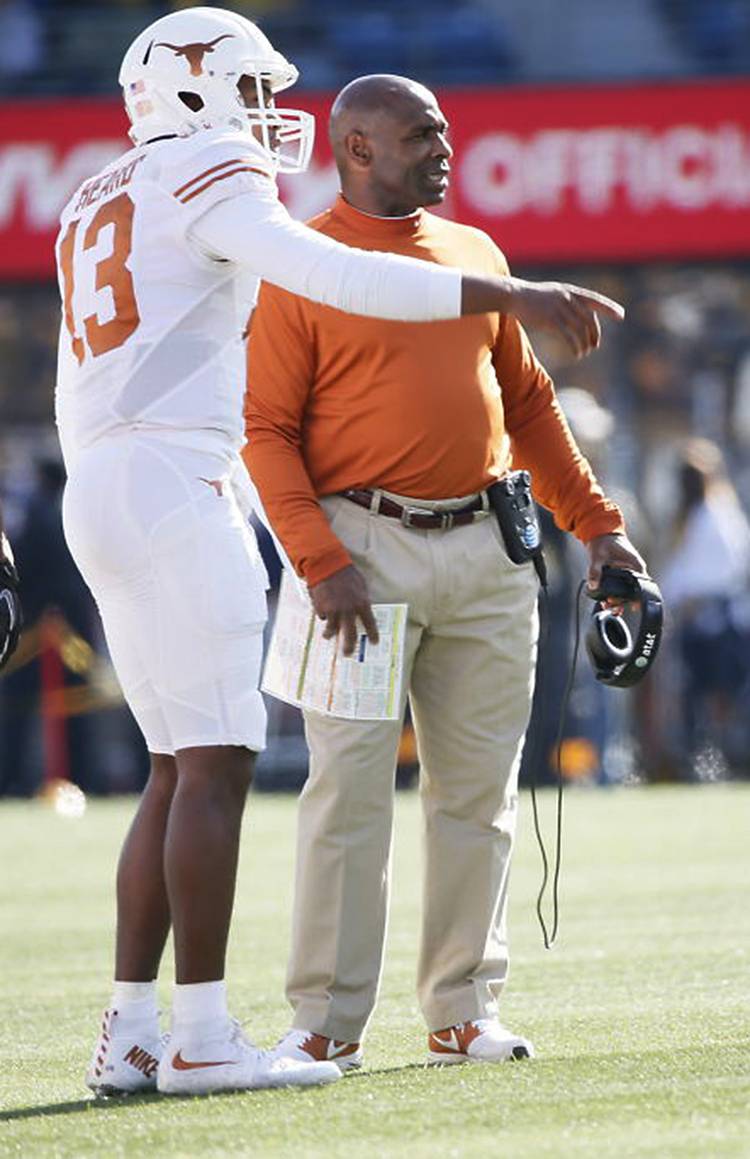 MORGANTOWN, W.V. — The quarterbacks struggled, turnovers happened and another road opponent ran the Texas Longhorns out of the stadium.

This time it was West Virginia applying the second-half clamps to an offense that just hasn’t had any answers outside of a shoulder-shrugging week win over last-place Kansas.

Saturday’s 38-20 loss virtually assures the Longhorns will finish with fewer than six wins. Unless they figure out a way to beat Texas Tech at home and Baylor on the road.

We long ago passed critical mass for the 2015 season after the Cal and Oklahoma State losses followed by the failure to produce a single point at Iowa State. We’re not at the point where Charlie Strong must ask himself if his two quarterbacks, particularly Jerrod Heard, are good enough to move the program forward while also asking if this offensive philosophy can lead to ultimate success in a conference that’s all about shootouts.

This team is sinking, and Strong isn’t seeing enough progress from the most important position on the field. Neither Heard nor Tyrone Swoopes are going to be mistaken for an All-American any time soon, but the plan outlined for them has been a simple one: Manage the game, and take care of the ball. They failed on Saturday.

Heard and Swoopes accounted for three of Texas’ five turnovers and the Mountaineers converted their miscues into 17 points. Heard completed a respectable 11 of 18 passes for 162 yards a touchdown, but also threw two interceptions, the biggest coming early in the fourth quarter when he short-armed what should have a touchdown pass to Armanti Foreman, not a momentum-stalling pick.

Clean quarterback play and a solid running game have kept the Horns competitive in several games, but when turnovers enter into the narrative, bad things can happen faster than a mountain mama hitting the repeat button on a John Denver greatest hit CD.

“I didn’t do good,” Heard said. “I threw those two picks. When you take two turnovers, that hurts the team.”

The loss stung more this time because the Longhorns actually looked the better of the two teams at times. Say what you will about Texas, but the one thing we could hang our collective hats upon was the Horns taking good care of the football. Entering this one, Texas ranked 12th nationally in turnover ratio. Even with their well-documented road struggles, those losses didn’t come because of volume turnovers.

Until Saturday. And it was the quarterbacks giving them away.

He struggled to find answers to questions he has heard over and over again in the most difficult season of his coaching career. A good play here, a good play there, a crushing turnover to end a promising drive.

“We were moving the ball and they weren’t stopping us,” he said. “We were only stopping ourselves.”

Strong is fighting to keep his head above water because his offense was long ago exposed as the square peg in a circle of pass-happy Big 12 programs.

As long as Art Briles, Mike Gundy and Kliff Kingsbury are coaching in this league, teams will have to take chances to keep up on the scoreboard. Some can do it with the running game — LSU and Alabama come to mind — but by and large, a team that struggles in the passing game is more than likely doomed to fail against more explosive offenses.

Ground Chuck can work at times — Texas ran for 277 yards Saturday — but it isn’t deficit-friendly. Strong doesn’t have a gunslinger on this roster, so it’s understandable that he would stick with a ball-control mentality and hope his defense can make enough stops given the present roster.

Strong and quarterback coach Shawn Watson still must continue to challenge Heard to be a better passer because a one-trick pony will get smothered in this conference. I believe Heard can be a productive quarterback. It’s up to Strong to figure out how to get the most out of a kid who obviously has some talent.

When asked what he expects from his quarterbacks in the final two games, Strong said, “Just making the throws, making sure we can manage the offense. Just making plays.”

It’s an offensive conference. Strong knows winning seasons won’t happen with sub-par play from the money position. He needs more from Heard, else nights (and seasons) like this will continue.