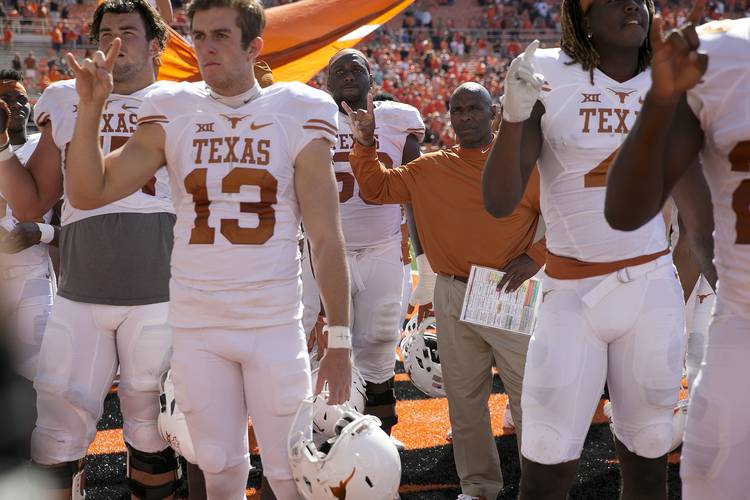 Texas Coach Charlie Strong is surrounded by his team as they listen to the Eyes of Texas after losing to OSU at Boone Pickens Stadium in Stillwater, Ok., on Saturday, October 01, 2016. Texas lost to OSU 49-31. DEBORAH CANNON / AMERICAN STATESMAN

STILLWATER, Okla. — Charlie Strong is running out of answers.

That’s assuming he had any to begin with.

The Longhorns weren’t ready for Mason Rudolph’s pin-point passing. Or for the other Barry J. Sanders to give them a taste of what his old man used to give teams on the regular. Or for Oklahoma State’s receivers to turn medium gains into long-distance touchdowns. Or for a 310-pound defensive tackle to block an extra point or two.

Or for that premature No. 11 national ranking that came after edging what’s become a grossly overrated Notre Dame team in overtime in the season opener.

The sad part? Saturday’s 49-31 loss to Oklahoma State wasn’t really a beat-down. This isn’t the Texas team that lost 38-3 in South Bend and 50-7 in Fort Worth last season. But the Longhorns have pseudo-graduated into a one-dimensional bunch: Score well every game, but give up more. There isn’t enough progress being shown.

It seems like forever ago that the local tackle football team — and I use the term “tackle” loosely — was a real national player, or even on the verge of becoming a real national player. But that talk has dissolved amid a sea of breakdowns in every facet of the game except for the running game.

There comes a time when coaches have to take the responsibility for the product that’s being put before us. After the defense was exposed in Berkeley, Strong’s crew had two weeks to prepare this team. And they weren’t ready. Missed tackles. Three blocked extra points. No deep balls to think of to John Burt or Jerrod Heard despite a defense that was softened up by yet another 300-yard rushing performance. And zero takeaways for the third straight game against a Power 5 opponent.

That falls on the coaching staff, especially the man in the biggest office.

After Strong gave familiar answers to questions he’s heard over and over the last two weeks, Perrin was asked if he’s evaluating his head coach.

If Perrin’s not evaluating Strong and his assistants by now, then he should go back to his law practice. What are you waiting for, an eight-game losing streak?

Now is the time to start asking real, tough questions to the people who are cashing fat checks to produce good football teams.

The coaching staff has to be put on notice. The guys in that room have been in this business long enough to know when they have to pick it up or suffer the consequences. There’s talent on this roster, but the results aren’t there. The season hangs in the balance. Oklahoma is waiting, and that promising two-game start could quickly turn into a three-game losing skid.

The players feel this hurt. Offensive lineman Patrick Vahe didn’t sound as if he was completely sold on what’s going on right now.  Defensive end Breckyn Hager, a second-generation Longhorn, bolted for the locker room before the “Eyes of Texas” was even played.

“We’re underachieving,” Hager said, fighting back his emotions. “I don’t want to be a loser.”

Defensive coordinator Vance Bedford addressed the credentialed media after a game for the first time in the last 24 games, and he echoed what’s glaringly obvious after the Horns gave up 555 yards, the fifth time a Texas team has surrendered 45-plus points and at least 500 yards dating back to last season.

“We need to cut down on giving up big plays,” Bedford said. “If we do that, then we’re going to be just fine.”

The Horns are who they are — a 2-2 team that’s good at one thing and not much else right now. And even that’s in question with D’Onta Foreman and Chris Warren III both banged up.

Perrin should know it.