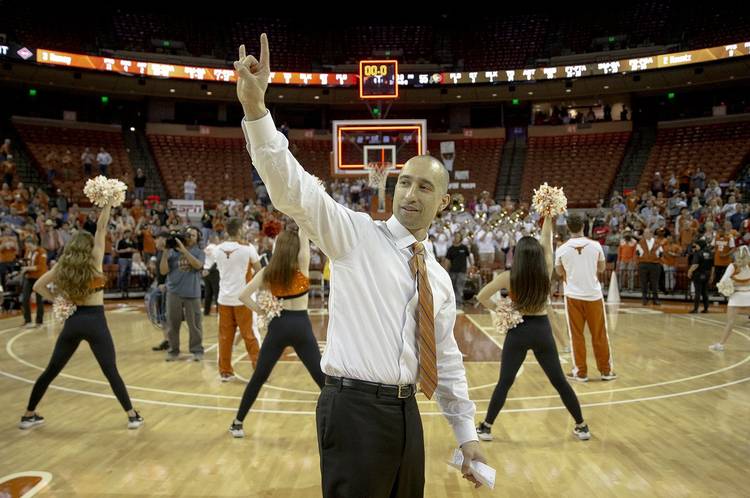 As players gathered to dress after their third straight win in the NIT, Texas men’s basketball coach Shaka Smart looked around the room. “Let’s finish this thing the right way,” he told them. “You guys want to win a championship?

It’s the kind of locker room banter fans envisioned happening four years ago when Smart arrived, full of hope and enthusiasm. The context was different Wednesday night after the Longhorns’ 68-55 win over travel-slogged Colorado earned them a bid into the Final Four of the other tournament, aka the NIT.

Smart and his players are still smarting from not making the NCAA Tournament, but they’re relishing the chance to win something, anything.

Advertisement
Ice cream is sweet but Texas’ road was rocky during the regular season. The Longhorns dealt with lead guard Andrew Jones’ fight with cancer, senior guard Kerwin Roach being suspended for the third time, a horrific pair of losses to Radford and VCU, collapses against Michigan and Baylor when Texas led by 19 points, and the late-season injury to star freshman Jaxson Hayes.

Then they were left on the outside looking in when March Madness invitations were announced.

“When we sat there on Selection Sunday and our name wasn’t called, for all us players and coaches, you live for that,” Smart said. “You live for your name being called on that day. As a player and as a coach, that’s a big punch in the gut.”

They have responded in positive fashion, but this does not change the disappointment that was a 16-16 regular season. There remain legitimate concerns regarding Smart’s ability to lead this program to special places. Regardless of what happens in New York, he didn’t meet expectations. Most of the fans are still angry as echoed by the scant 8,925 that showed up for the three NIT games at the Erwin Center.

A smiling Chris Del Conte gave his embattled basketball coach a hug as he left the interview room Wednesday, and that’s probably been needed for some time. The Texas athletic director doesn’t want to fire Shaka, but he knows something has to change — either on Smart’s staff or in his overall philosophy — for the program to make real progress.

His 19-16 team is playing its best ball since the first month of the season and showing the kind of resolve that probably would have landed it a spot in the NCAAs instead of the NIT. The seniors — Dylan Osetkowski and Roach — are leading the way, averaging nearly 30 points over the last two games.

It was TCU — the Longhorns’ NIT semifinals opponent — that ended Texas’ tourney hopes three weeks ago on senior day. That loss plunged the program into the Not Invited Tournament.

Could be the Horns are winning because they aren’t playing elite competition, though I would argue Xavier had some quality players.

Could be the Horns have finally let their hair down and finally embraced the idea of playing free and easy. I like that answer though it’s much easier to play looser when the expectation level has come way down.

Or it could be they’re playing with a nothing-to-lose mentality.

“It’s just an increased motivation,” point guard Matt Coleman said. “Our team has really grown the last two weeks with team chemistry. Now we just have carry over what we did here to New York.”

Colorado coach Tad Boyle refused to use the quick turnaround from Monday night’s win as an excuse, but the Buffaloes ran out of gas in the second half against a fresher Texas team. But the deeper Horns probably would have won anyway. They’re playing inspired ball on both ends of the court and their seniors are embracing this lease extension to their careers.

Shoot, even the head coach is having some fun.

In a two-minute span of the first half, guards Courtney Ramey and Coleman each drew offensive fouls. The second one drew a rare show of emotion from Shaka, who pumped his fist as if he had just homered off Dennis Eckersley in the ninth inning of a World Series game.

It’s not 1978, but an NIT title would provide some needed momentum for next season.

“It says our guys want to keep playing,” Smart said of the win.

And he wants to keep on coaching.