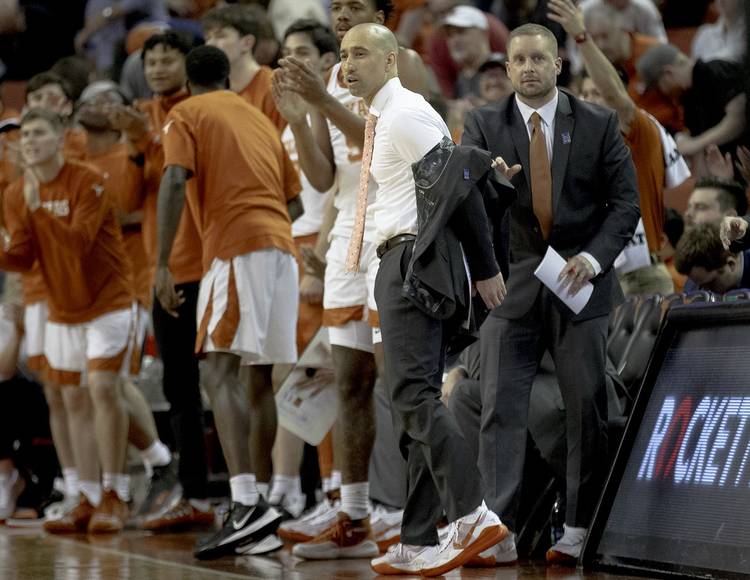 Texas head coach Shaka Smart removes his suit jacket as the action heats up during the game against LSU on Saturday. [NICK WAGNER/AMERICAN-STATESMAN]

What’s the difference between a 38-point loss at West Virginia and a two-point home loss to LSU?

For the floundering Texas Longhorns, it’s a two-word answer.

At this point of the season, style points don’t matter, even for losses.

Good teams find ways to win. LSU is a pretty good team, and the SEC leader came in here hoping to steal one on the road. Four months after Joe Burrow began his Heisman campaign at DKR, the Tigers did just that Saturday, this time behind burly freshman forward Trendon Watford, who went for 22 points.

Where do we start?

The 69-67 loss was equal parts infuriating and frustrating for the fans who showed up to Club Erwin in good numbers. The student section was actually filling up nicely before the tip, and the kids continued to arrive in droves in the opening minutes.

Then it hit me. Were the students there in a cool show of support for the local team in dire need of a win (and a hug), or were they in the house to play in the free Smash Bros. tournament after the game? I’m giving Mario and Donkey Kong the edge over another potential Longhorn letdown.

Soon to be season over.

And if this slide continues down the predictable road to oblivion, it could mean the end of the sitting head coach’s tenure in Austin.

After Shaka Smart’s Horns were boat-raced 97-59 in Morgantown earlier in the week, the conventional thinking would lead one to believe his players would be teed off enough to put that embarrassment behind them with an intense, spirited effort against the Bayou Bengals. Instead, fans were forced to digest a sloppy, sleepwalk of a first half followed by a competitive second half that led to an all too familiar result.

“They played with their hair on fire later in the game, but we didn’t start the game that way,” Smart said. “You want to respect the opponent. You certainly know what the opponent can do, also have to have a mindset of ‘I’m just as good if not better than this guy.’”

Believing you are better and playing like you are better are mutually exclusive. Turns out Texas wasn’t better, even though a full-court press and an aggressive half-court trap in the second half — I’m not going to use the ‘H’ word — and some hot shooting off the bench from Andrew Jones actually resulted in the Horns rallying from a 16-point deficit to take a 58-56 lead with 4:52 left.

Speaking of Havoc — OK, I lied — Smart should be checked for a lobotomy if the Horns don’t press like hell for the rest of the season, even if they are shorthanded. What do they have lose? This team needs energy, and those turnovers would produce layups. Layups are much easier to make than 3-pointers, and Texas takes entirely too many.

Players like Donovan Williams, Kai Jones, Royce Hamm and Jericho Sims — the team’s best player, who still isn’t getting double-digit field-goal attempts — are built for this style of defense, and it’s something that just might get the Horns some much-needed cheap buckets.

For a 12-7 team that’s short on wins and long on desperation, pressure defense is the right call. Who knows? It might actually led to a couple of runs, kind of like it did against LSU, which was able to pull things together down the stretch to get out of here with a win, thanks in part to some sloppy Texas offense at money time.

That said, this team’s problems are much bigger than which defense is being employed. The Horns lose basketball games. That’s the unavoidable reality.

“There’s nobody to be mad at but ourselves,” guard Matt Coleman III said. “It’s a 40-minute game, and we have to get up for 40 minutes.”

A win would not have solved Texas’ laundry list of issues, but it would have given the players, fans and coaches a little bit of hope of turning this thing around. Instead, the Horns are confronted with the growing belief that this thing is over before it ever really got started.