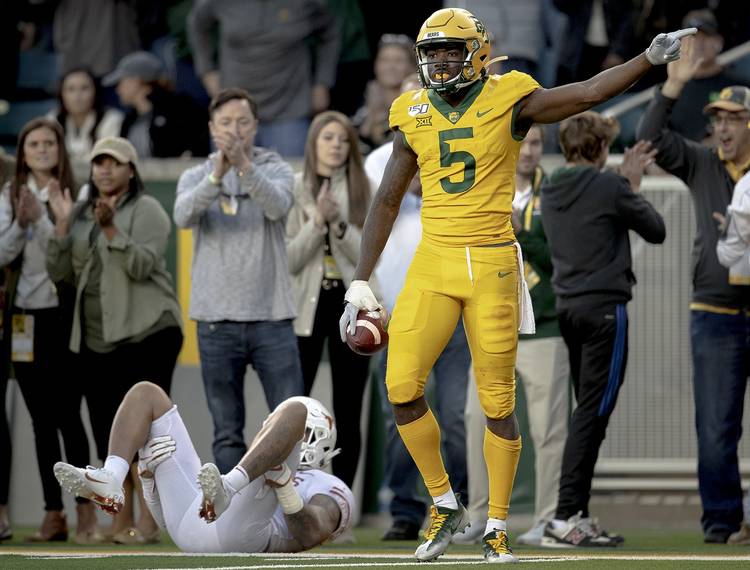 WACO — Tom Herman pointed the finger at himself after Texas’ latest road disappointment.

It was another gut punch to fans, another step back for the program and a real head shaker for anyone who watched the  Sugar Bowl.

Ten months after quarterback Sam Ehlinger announced “We’re baaaack!” to overjoyed fans at the Sugar Bowl and millions watching on national television, the Horns are back all right. Back to being mediocre. Back to not being Oklahoma’s biggest threat. Back to the middle of the pack.

“I’ve done a poor job and the buck stops with me,” Herman said.

The 24-10 loss to surging Baylor wasn’t even that close. The Horns were a no-show on offense once again — opponents have outscored them 28-3 over their last three first quarters — Ehlinger, the heart and soul of this team, was left shrugging his shoulders after a couple of questions were posed his way in the post-game press conference.

Sam has heart and toughness, but like I’ve said before, he can’t do it by himself. The Horns got a 68-yard run from Keaontay Ingram — who hurt his ankle on the play and had to leave — but couldn’t put together enough of a balanced attack through the first three quarters to bother Baylor and its star linemen Braavion Roy and James Lynch. The Horns penetrated Baylor’s 20-yard line only once and that came in garbage time.

Garbage time may be an apt description for several performances since Texas walked off the field that night still in contender mode after a great game against LSU in September, but while the Bayou Bengals are a serious title contender, the Horns are back to the old let’s-send-these-seniors-out-on-a-high-note talk. That’s code for “we’re not competing for anything bigger than a winning record.”

Things got so bad down the stretch on Saturday that guard Parker Braun thought he had been ejected after an exchange with an official led to an unsportsmanlike conduct penalty. He should consider himself lucky because he didn’t have to sit through the whole thing.

I assume Herman answered questions to the best of his ability following the game, but the answers didn’t provide great context since it’s the same ones we’ve been hearing since this team began its steady descent from Big 12 title contender to middle-of-the-road national ranking to the tired bunch we now see before us.

Early in the fourth quarter, “Fixer Upper” star Chip Gaines, a Waco icon, was spotted on the McLane Stadium video board.

The board operator posed a question.

Well, if you’re scoring at home, there were no Matthew McConaughey sightings on the UT sideline. I guess the Horns can’t play LSU every week. Either way, the culture in Waco is trending upward while we have some real problems in the 512.

When Herman took over for Charlie Strong in 2017, he had some talent at his disposal. He pulled a nice little fixer-upper job with a couple of winning seasons, including what many of us thought was a real program turner with that win over Georgia. But here we sit in late November after watching the Horns lose for a fourth time in six games after losing only four times all of last season.

Now Herman has to guard against the locker room checking out with only two games left.

You got the feeling that Herman wanted to show his players that he was still all in during pregame when cameras spotted him delivering three head butts to Roach.

Yes, Roach was wearing a helmet and Herman was not.

Then the Longhorns went out and played punch drunk.

With five seconds left, a Big 12 cameraman told me on the sideline to watch out because Baylor fans were about to storm the field.

“Nah, I don’t see it,” I said. “This fan base expected to win today. It’s not like they just beat Oklahoma.”

The fans stayed put because they know what we all know. Baylor is miles better than Texas right now. Why celebrate against a team you know you’re supposed to beat?

It’s time for Herman and his staff to go back to the drawing board.

Time for another fixer-upper.

RELATED: Bohls: Texas has no answers, and no offense either, in 24-10 loss to Baylor