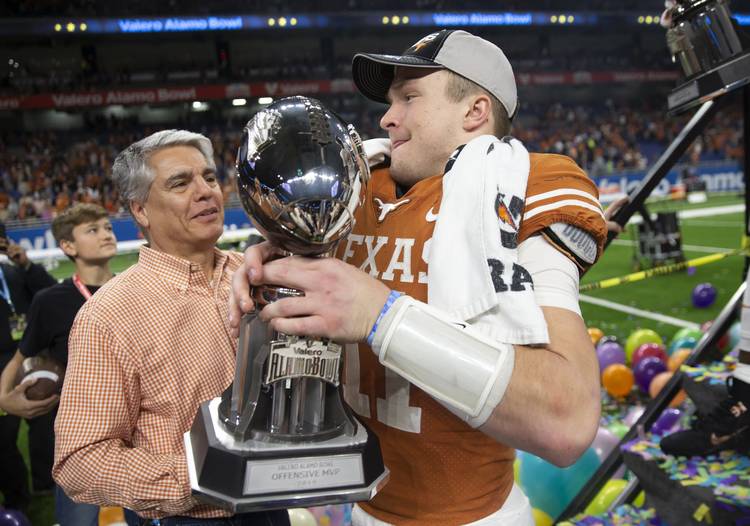 Texas Longhorns quarterback Sam Ehlinger (11) holds up the offensive players trophy after beating Utah Utes 38-10 during an NCAA college football game at the Valero Alamo Bowl at the Alamodome on Tuesday, December 31, 2019 in San Antonio, Texas. [RICARDO B. BRAZZIELL/AMERICAN-STATESMAN]

SAN ANTONIO — They left this place better than they found it.

Players from Texas’ senior class set the emotional tone in their final game and the young ones followed suit Tuesday night.

The Longhorns (8-5) didn’t just beat the 11th-ranked Utes. They punked them. Outplayed them. Out-physicaled them. Took their heart.

Texas showed up on New Year’s Eve and delivered a resolute butt-kicking to an opponent that was one win away this year from possibly playing in the College Football Playoff.

The 38-10 win wasn’t even that close. Texas dominated on both sides of the ball and in a performance reminiscent of the Sugar Bowl win over Georgia, walked off the field as the unquestioned tougher team.

Anytime you hold a highly ranked team to 254 yards and only 10 points, it’s a job well done. Utah (11-3) knew coming in that Pac-12 teams that have lost the conference title game were 0-8 all-time in bowl games.

At least the Longhorns appeared to be for one glorious night on the final day of the year.

You know, kind of like they appeared to be back in New Orleans on the first day of the year.

One season after quarterback Sam Ehlinger delivered a signature performance in the Sugar Bowl and uttered those electric two words, the Longhorns didn’t live up to that lofty No. 8 preseason ranking.

The team spent weeks leading up to the Alamo Bowl knowing many fans had checked out, but for the ones who stuck it out — including most of the 60,147 at the Alamodome — Texas’ wire-to-wire masterpiece renewed hopes and avoided any full-on panic mode that would have come with a 7-6 record.

So Sam pulled the trigger a bit early in the Big Easy, but who could blame him? It was easy to get caught up in the moment, even for guys like me, who predicted a 10-2 finish this season in August.

“I’m not going to do that again,” Ehlinger said to big laughs post-game.

Texas was lacking in that area with disappointing outings against TCU, Iowa State and Baylor and a second straight loss to rival Oklahoma. The Horns could have mailed it in Tuesday against an opponent favored by a touchdown in most betting houses, but they pulled it together and won convincingly. Some credit has to go to Herman, but most of the backslaps should be reserved for Ehlinger and the OGs who arrived on campus a year before he did.

Malcolm Roach, Zach Shackelford, Collin Johnson and Devin Duvernay closed their careers in style and a crew that was coming off a 5-7 finish in Charlie Strong’s final season went 25-15 over its final three years, including a 3-0 record in bowl games.

They left this place better than they found it.

“My class and our legacy, you know, the ultimate goal is to win a national championship, and win the conference championship,” Roach said. “We didn’t do that, but we won three bowl games in a row. That hasn’t been done here in 10 years, I think. It just shows what you can do when you stay together.”

There was strength in small numbers Tuesday night. Duvernay and Johnson caught six passes for 154 yards and a pair of touchdowns while Roach, with an able assist from Joseph Ossai, set up camp in the Utah backfield for most of the night. Shackelford, Parker Braun and Sam Cosmi helped keep Ehlinger clean up front while the Horns gobbled up 231 yards against the top rushing defense in the country.

Herman used words like “effort” and “physicality” in describing his team’s performance while his boss beamed as he exchanged handshakes and hugs while the confetti and balloons streamed down from the ceiling.

Herman’s mission moving forward is to make sure he has his team ready to play, whenever and wherever. Too many times this season the Horns played unprepared, uninspired football — too many uneven performances — and that blame has to go to the adults — including the $6 million man —  who are paid to keep the right physical and mental balance from game to game.

Sure, the Horns gave championship game finalist LSU all it could handle, but the season was largely inconsistent. A disappointing loss to Oklahoma, a no-show at TCU and a loss to a Baylor team that supplanted Texas as the No. 2 team in the league were enough for Herman to make significant staff changes.

After this 8-5 finish, the goal remains the same for Herman, his returning coaches and new coordinators Mike Yurcich and Chris Ash. Just as important are the players who must learn from the experiences — good and bad — of the 2019 season.

Moving forward, we can join Sam and table any talk of Texas being back.

Let’s just call this a nice step in that direction.