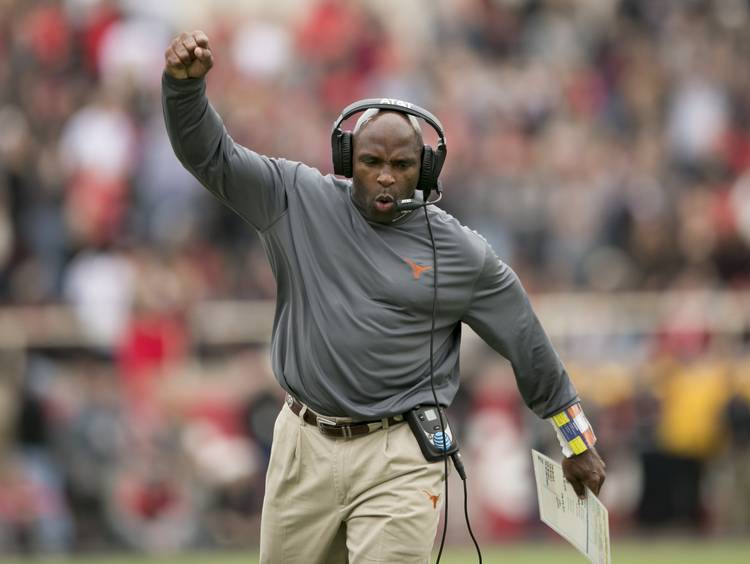 When the story of Texas’ 2016 season is written, the word  “resilience” will come up a time or two.

It was easy to see from the comfort of my couch that the Longhorns overcame several obstacles in Lubbock that were much more formidable than frozen tortillas hurled from the stands of Jones AT&T Stadium. As a result, the Horns (5-4, 2-3 Big 12) are at the very least one non-collapse in Lawrence away from playing in a bowl game this winter. Yes, friends, Charlie Strong will have the Horns playing in a 13th game for the second time in three years.

What we’ve witnessed over the last couple of weeks is a Texas team that’s figuring out how to get it done against elite offenses. The 45-37 win over Texas Tech — I had Texas winning 45-42 coming in — was a story of how the Horns overcame.

The team that takes the field at home against West Virginia on Saturday should have an endless supply of belief and confidence after a nice breakthrough.

They overcame early heartbreak. Is there anything worse than going in for a touchdown and a double-digit lead only to have it wrested away with a 100-yard fumble recovery return attached? Even worse, replay showed that D’Onta Foreman broke the plane of the end zone before Douglas Coleman stripped the ball. Worse yet, Coleman stepped out of bounds at the 2-yard line before he crossed the goal line, which went unnoticed by the replay officials.

Thankfully this came in the second quarter, giving Texas plenty of time to complete the comeback. The defense did its part to keep the Horns in there even when things went against them.

They also overcame a bad road history. The Longhorns haven’t exactly been the picture of clutch away from DKR. Texas had won only once in its previous eight road games, even though at least two of those games were winnable. Somehow the Horns marshaled their collective resolve and made the plays that mattered.

This was new on the road. Maybe, just maybe, it was a program-turning win, not that Texas Tech is Alabama or anything, but because of how Texas won. Did they have their tense moments? Sure they did. Jerrod Heard dropped a sure touchdown pass, which is the second dropped touchdown in the last three weeks on the road — Armanti Foreman had the other one in Manhattan — but youngster Collin Johnson took up the slack with his first two touchdown catches of his career.

How about this: They overcame their reputation as a bad road defense.

Malik Jefferson played perhaps his best road game as the spy on Patrick Mahomes II, and Kris Boyd, Jeffey McCulloch and John Bonney made plays on the back end. And don’t forget Poona Ford, Paul Boyette and  the big boys up front providing a nice pass rush over the last three quarters.

And, finally, they overcame some questionable decision-making on their own sideline. Strong told us on Monday that he pretty much entrusts the entire offense to offensive coordinator Sterlin Gilbert, which is starting to become a bit of a problem down the stretch. Make it two straight games where D’Onta Foreman has been north of 250 yards but ignored at winning time. For the second straight week,  Gilbert called for Tyrone Swoopes’ 18-Wheeler package over the man I believe to be the best running back in America.

The second time came with Foreman standing on the sideline in Reggie Bush mode on a fourth-and-short.  Swoopes was stopped short of the first down.

“In that package, we have been successful. We knock people back,” Strong said. “And you are just thinking that it was third-and-2, only thing we need to do is get one. So I said we’re going to go for it.”

Successful at times, but not the awe-inspiring results like when Buechele hands off to Foreman. I hate to say it, but this line of thinking will eventually get the Horns beat. They survived many obstacles on Saturday, but play-calling shouldn’t be an issue this far into the season. Gilbert also called two late pass plays when the Horns could have salted the game away with little drama. Instead, the Red Raiders got the ball back with plenty of time to tie. That’s on the coaches.

Looking ahead, West Virginia  will provide a more balanced attack at DKR on Saturday. Strong needs to clean up the play-calling gaffes with the game on the line if the Horns are to post just the second three-game winning streak of his tenure. He has been far from a great game-day coach, but has figured out in the last couple of weeks how to win under duress.

I can’t say the Horns have turned a corner, but whatever is taking place is a good thing, especially now that they  finally showed some moxie away from home.

Six wins was the hope three weeks ago, but just like that, six wins are no longer acceptable.