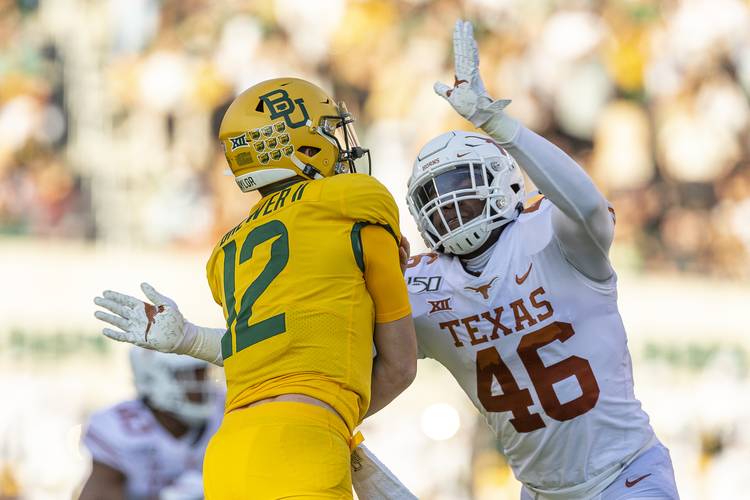 At the Alamo Bowl, Joseph Ossai gave us a glimpse of just how great he can be.

And his coaches noticed.

As a result, he is moving to the backfield, in a sense.

The Horns need sacks, and quarterbacks reside in the backfield. If the coaches are right in moving the talented junior closer to the ball, those signal-callers will have some unwanted attention come this fall.

Ossai’s new assignment is called “Jack,” which is basically a stand-up defensive end/linebacker — a hybrid, if you will. But let’s not get it twisted. He will spend most of his time on the edge next season — as will Demarvion Overshown, who is moving from safety — because the Longhorns were unable to get consistent pass pressure last season with games on the line.

Sure, he will drop into coverage on occasion, but this move was made to get more hands on the quarterback, ideally Ossai’s hands.

Teas coach Tom Herman said the “sky is the limit” when asked about Ossai’s upside.

“He’s aggressive,” Herman said. “He’s twitchy, he’s long, he’s fearless, and he’s really, really smart. I love him. I absolutely love him. I think this will be a great fit for him.”

It’s a switch in responsibility, but Ossai, an analytical thinker who has had no problem calling himself out when he hasn’t played to his own high standards, is the right man for the job because he’s dripping with athleticism and has the requisite fire that can light up a defense that’s overdue for a flammable presence at a playmaking position.

Redding was an elite athlete who never gave himself full credit for a great game. If he had two sacks, he would say he should have had four. That need to push himself to be better led to him becoming a two-time All-Big 12 performer who eventually registered 35½ sacks in 13 NFL seasons.

Ossai started eight games his sophomore season and established himself as the best young playmaker on the team with a team-high 55 tackles, five sacks and two interceptions. He made his unofficial introduction as a future star with a sack and an interception of eventual Heisman Trophy winner Joe  Burrow.

He finished the season on a high note with three sacks and a team-high nine tackles — five behind the line of scrimmage — en route to a defensive MVP performance in the 38-10 Alamo Bowl win over No. 11 Utah.

“What he displayed, especially in the bowl game, is just the tip of the iceberg,” Redding said. “He’s only going to get stronger, and he’s only going to get faster. The more his football IQ develops as far as knowing how people are trying to attack him, the better he will be.”

In a season in which Texas did not live up to its No. 11 preseason ranking, Ossai’s penchant for being around the ball didn’t go unnoticed. Todd Orlando’s 3-3-5 base defense was designed to highlight the linebackers and prevent big plays on the back end, but the lack of a pass rush turned out to be a killer.

Texas’ 27 sacks ranked sixth in a Big 12, where most of the defensive coordinators were fine with rushing three up front and dropping eight defenders into coverage, but nationally the Horns ranked 69th. That’s in the bottom half, which doesn’t cut it for a program desperately seeking a return to being a consistent national contender 15 seasons after its last national title.

After Herman gave Orlando the gate, he brought in Chris Ash, who immediately announced that Texas would switch to a more traditional 4-3 base. If Ash has his way, his new Jack will become the program’s next great disruptor on the edge, and that will take pressure off the linebackers and secondary, which was asked far too often to blitz.

The scheme switch should lead to more sack opportunities for the ends; only three of UT’s sacks last season came from a full-time end. It’s too early to anoint Ossai as the bell cow of this front seven, but there’s nothing wrong with acknowledging the great potential he possesses.

Just as important is the mental makeup to make the transition quickly, a wise-beyond-his-years maturity nurtured by his No. 1 fan, his mom.

“I like to look at myself first before I point fingers,” Ossai said. “She always says if you point a finger at someone that there are three fingers pointed back at you.”

Ash has been around some real animals at the position, among them J.J. Watt at Wisconsin and Joey Bosa at Ohio State. So Ossai is in good hands.

“He’s got length, he’s got speed, and he’s got long arms,” Ash said. “He’s got to to develop the fundamentals to be a great pass rusher. I’ve been around some really good ones, and hopefully Joseph can become another one of those guys.”