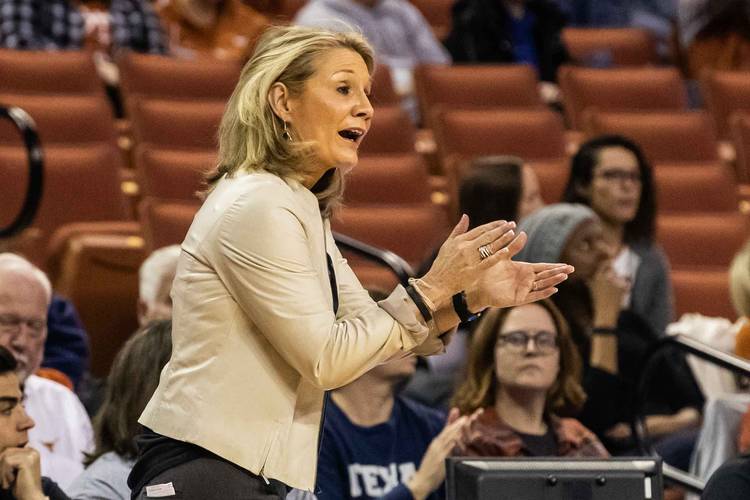 If Texas players are interested in getting head coach Karen Aston a contact extension, they have a weird way of showing it.

Worse yet, there was the appearance of concession in the second quarter of Wednesday night’s loss as Iowa State players began driving to the rim for uncontested layups against a Longhorns roster that houses a handful of McDonald’s Americans.

The responsibility ultimately falls at the feet of the head coach.

“We’e been able to keep our spirits in games,” Aston said. “I don’t really have an explanation for our attitudes and our body language. I don’t have any excuses for our performance at all.”

The fans aren’t looking for excuses. They want results. The juice has been lacking since 2018, when a four-year run of Sweet Sixteen appearances — including one Elite Eight in 2016 — ended, coinciding with the departures of electric guards Ariel Atkins and Brooke McCarty.

With Saturday’s game coming up at 1-11 Kansas, Aston’s crew isn’t at critical mass — the Longhorns have gone 6-2 over their last eight games — but to put a product on the court like the one that shot 27% from the field with 19 turnovers in a 69-51 clunker to a Cyclones team that you handled by six last month in Ames?

We saw little in the way of resistance against Iowa State. The six turnovers in the first eight minutes were troubling but not unfamiliar since the Horns have ranked 116th or worse in that category in all but one of Aston’s nine seasons. The current average of 16 miscues per game — which ranks 171st — is right in line with the 16.8 turnovers Texas has averaged during her tenure.

The recent beatdown could be chalked up as “one of those nights,” but the problem runs much deeper. This wasn’t the same as losing again to a team like Baylor — a juggernaut which could repeat as national champion this spring — but more troubling because there were segments of the game where we witnessed give-in. Listlessness. Futility. All from a talented team that has no business being unranked this far into the season.

They should win in Lawrence, but they could also go up there and struggle. It depends on which Texas team shows up, a maddening reality for fans who have become accustomed to these uneven performances over the last couple of seasons.

This all points to the issue being more systemic than isolated.

Aston is in the final year of her contract and if Texas doesn’t make some noise in the postseason, her tenure will be in jeopardy. Athletic director Chris Del Conte always says his coaches will be evaluated at the end of their respective seasons, and Aston presents an interesting study. The Longhorns are 15-8 overall and third in Big 12 play at 7-4. That’s solid position to make the NCAAs, but she knows her job isn’t to make the tourney but post some wins in the tourney, something she had done before last season’s first-round exit.

Kansas provides a chance for bounce-back and I won’t be surprised if the players figure a way to get a win there. Either way, this is who they are: A group with some nice parts, but one that can’t figure out how to perform on a more consistent basis.

Point guard Sug Sutton has WNBA talent but has often struggled with the concept of when she should take over a game. During a 21-point first half against Iowa State — Texas’ third worst first half showing of the season — the team’s best shooter attempted only three shots, deferring far too often for teammates who weren’t getting it done. Sutton is the barometer. When she is right, the Horns are a tough out. When she is off, it’s usually a loss.

“I do believe I should have been more aggressive throughout  the whole game,” Sutton said,  “but we needed to get our blood flowing on the defensive end before anything.”

Then there’s senior forward Joyner Holmes, who has loads of talent. She has improved her jump shot, but is still plagued by missed layups and turnovers.

Senior guard Lashann Higgs was arguably the most underrated two-way player in the country before she blew out her knee four games into last season. She’s still capable and effective at times, but 15 months removed from surgery, she is sporting a bulky knee brace and is no longer the end-to-end blur we saw in previous seasons.

So outside of the much-improved Charli Collier, the Horns really had no answers for a team they should have handled, and therein lies the issue. At times they have shown an ability to play with anybody — the win over then top-ranked Stanford comes to mind — and at others, they have played a careless, uninspired brand of ball.

It all hints at an overall inconsistency that Aston must fix if she wants to be back next year.