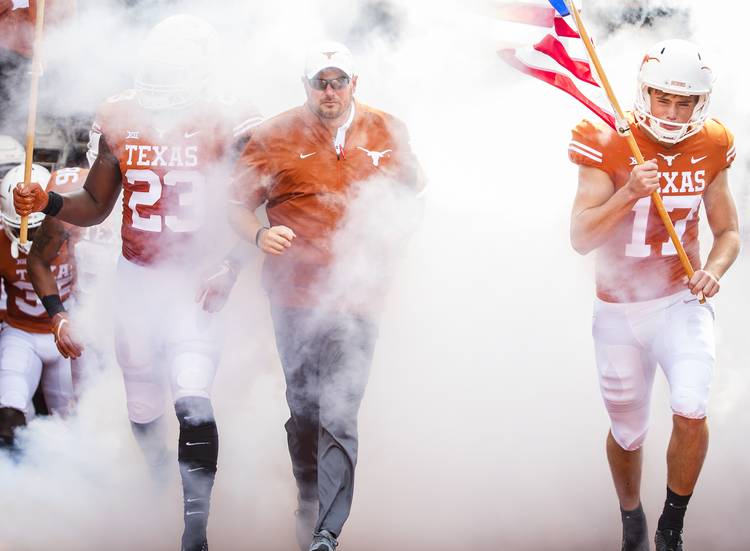 Your Sugar Bowl win over Georgia just stoked the championship fire of a trophy-hungry fan base.

As in right now.

Do you recall what former Texas coach Charlie Strong said about the state of the program during his introductory press conference at South Florida? Chuck took it the kitchen, so to speak. “I baked the cake at Texas,” he said in December 2016. “Now it’s Tom Herman’s job to put icing on the cake and win a lot of games.”

Well, Herman has turned things around in his first two seasons, and with that turnaround — the Longhorns are 17-10 with a couple of bowl wins — come even bigger expectations. Texas has stepped into the dark horse position as a team that could win a national championship in 2019, and if you really want to see who is buying into the hype, check Sports Illustrated’s preseason poll which has the Horns at No. 5.

It’s a bit premature to talk about championships because the Horns sure have the look of a team that’s one year away from serious title contention, given the sheer amount of young players who will be expected to take on bigger roles this fall.

But  what better place than the preseason to rev up the hype machine?

Publicly, Herman is taking the patient approach when it comes to titles. Texas is back in the national conversation but isn’t a world beater just yet.

Here’s the difference between today’s generation and decades past. Back in the day, athletic directors gave coaches more leeway in the development of programs. Today’s thirst for glory gives these highly paid coaches much less rope before a program changes directions in its leadership.

The question is whether Herman will be one of those coaches who wins a championship early in his tenure or whether fans have to wait another four or five years, or longer, before he breaks through?

Herman has spoken with Clemson’s Dabo Swinney about expectations and the process of building a program over time. Swinney took eight seasons to get Clemson to a national title game — the Tigers lost to Alabama — and then broke through for crystal balls in 2016 and 2018.

Herman’s mentor, Mack Brown, also took eight seasons to get Texas to a title game, winning it all over USC in 2005. Herman happens to be coaching in the same era as Swinney and Alabama’s Nick Saban, who won a national title in his fourth year at LSU and then another in his third year at Alabama with a win over the Colt McCoy-less Longhorns.

“I’m not saying we’re setting the bar at seven years, but what I’m saying is we want to win championships and we want to win  them now,” Herman said at Big 12 media days.  “But we were brought here to rebuild a program and that takes time.”

Herman did make one good point when discussing the need to win. There has to be at 100-percent buy-in from the organization, from the guys sweeping up the locker room all the way to the guys who write the checks.  Strong didn’t get the full support he needed at the bank from UT to maximize his chances of winning. Herman has been given the run of the Texas castle. Good for him, by the way.

“I really do believe that games are won or lost by players and coaches,” Herman said. “Championships are won by administrations. We have a championship administration in Chris Del Conte, our athletic director, and Greg Fenves as president. I think both of them understood where this program was when we took it over. We’re probably a bit ahead of schedule, to be honest with you, in terms of getting us back to consistently being where we expect Texas to be. But I do think there is an element of patience.”

Herman is the right guy for this job, and that’s been proven already. The fact that Texas is getting this much preseason hype is testament to what he has done in two years. But work still has to be done to get the program back to those glory days of yesteryear. Remember, Texas went 10-3 in 2007 and there were fans in Austin looking to run Mack out of town. Here we are, 12 seasons later, and they’re loving Herman after going 10-4.

That speaks to two things: The great depths that the program had fallen. And the title-starved fan base that’s been just wanting to get back to respectability.

“We weren’t here to just have a really good season in Year 2. We were here to rebuild a program that’s capable of sustaining success and we feel like we’re on our way there.”

So how long to a championship?

Eyes on Texas: With Andrew Beck now in New England, Cade Brewer steps into the spotlight