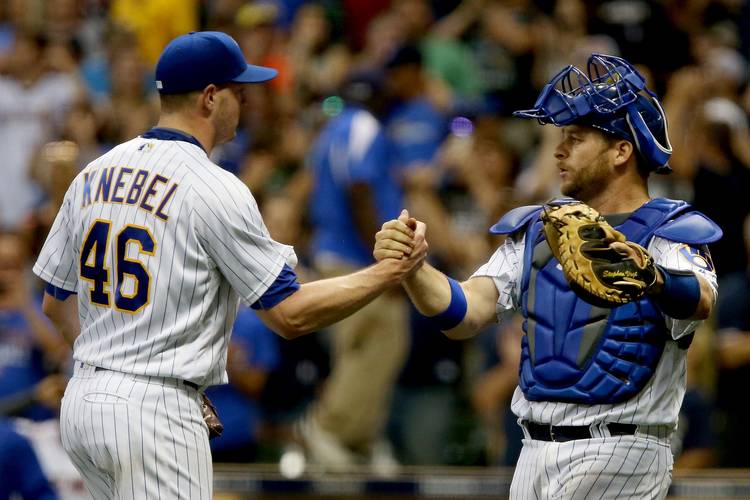 Corey Knebel #46 and Stephen Vogt #12 of the Milwaukee Brewers celebrate after beating the Miami Marlins 3-2 at Miller Park on June 30, 2017 in Milwaukee, Wisconsin. (Photo by Dylan Buell/Getty Images)

Corey Knebel, former Longhorns reliever, came close to taking the league lead for strikeouts among relief pitchers as he struck out the side in Milwaukee’s 4-0 win over Baltimore on Wednesday.

Knebel entered the night with 68 strikeouts, two behind Chris Devenski, before he added three more K’s to his total. Houston’s Devenski struck out two batters on the night to retain the lead by one.

Knebel also extended his MLB single-season record of 41 straight games with a strikeout as a reliever on the way to his 13th save.

Before the game Knebel was presented with his All-Star game jersey.

The former Longhorn was named to the All-Star game for the first time Sunday.

Move over Bruce Sutter, there's a new single-season record holder for consecutive games with a K by a reliever. His name is @coreyknebel29! pic.twitter.com/JzWWdan2pA

Knebel broke Bruce Sutter’s single-season record of 39 straight games with a strikeout by a reliever on June 30 when he struck out Miami’s JT Riddle.

The former Longhorn was drafted by the Detroit Tigers with the 39th overall pick in June of 2013. He made his MLB debut in 2014 before being traded to the Texas Rangers two months later. He was traded to the Brewers in January of 2015.

Breakfast with Bevo: How much Texas remains in Boise State’s Bryan Harsin?