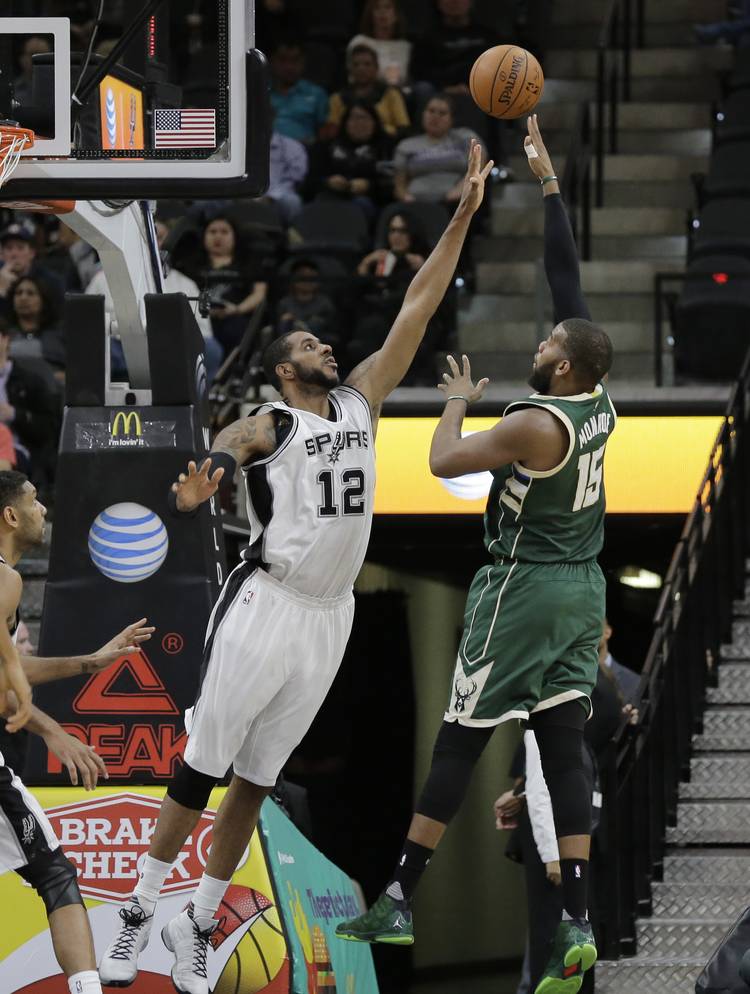 LaMarcus Aldridge had five blocks in the Spurs' win over the Bucks on Wednesday. (AP Photo/Eric Gay)

Kevin Durant, F, Oklahoma City Thunder: He scored 34 points and pulled down 13 rebounds in Friday’s 103-87 win over the Pistons. He also had five assists in the game. He followed that up with 25 points, six boards, six assists and four blocks in the 106-100 loss to the Hawks on Monday. He’s averaging 28.4 points per game to go along with 7.4 rebounds.

LaMarcus Aldridge, F, San Antonio Spurs: He had a double-double in the Spurs’ 92-89 loss to the Bulls on Monday. He scored 21 and gathered 12 rebounds in the game. He had a tough shooting night on Wednesday, but the Spurs throttled the Bucks so it was of little consequence. He did other things well, playing 23 minutes, grabbing nine rebounds and making five blocks in the win.

D.J. Augustin, G, Oklahoma City Thunder: He’s had a tough time recently. After scoring six points, grabbing four rebounds and assisting on three baskets in Friday’s win over the Pistons, he was held scoreless in 16 minutes in the loss to the Hawks.

Tristan Thompson, F, Cleveland Cavaliers: He’s averaging 7.7 points in his last three games and is in the midst of a seven-game streak in which he’s collected double-digit rebounds. He’s averaging 10.3 per game so far this season.

Avery Bradley, G, Boston Celtics: Bradley has score 58 points in his last three games on 52% shooting. He’s second on the team in points per game with 16.1 behind Isaiah Thomas who averages 20.8. Bradley scored 25 points and had three steals in Monday’s win at Miami.

Cory Joseph, G, Toronto Raptors: Joseph’s averaged 10.3 points per game in his last three games. He’s averaging 9.4 per game for the season, which is nearly four points better than his career average.

P.J. Tucker, F, Phoenix Suns: His nine points in Tuesday’s loss to Brooklyn were his highest total since Nov. 22 against the Pelicans. He’s averaging 6.2 points and 4.7 rebounds this season.

Myles Turner, F, Indiana Pacers: The rookie has missed eight straight games with a broken finger. His team has won seven of those eight games. He was contributing well, averaging 6.1 points per game and 2.9 rebounds before the injury. He’s trying to return to action around Christmas.