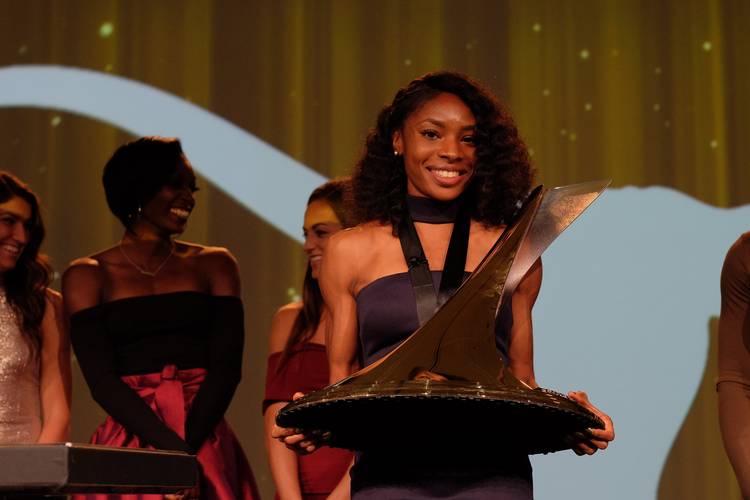 Courtney Okolo with The Bowerman in Orlando, Fla. on Dec. 16, 2016. (Photo provided by Texas Athletics)

Courtney Okolo, who wrapped up a historic track and field career at Texas in June, won the The Bowerman at a ceremony in Orlando, Fla. on Friday night.

The trophy, given annually at the United States Track and Field and Cross Country Coaches Association convention, is awarded to track and field’s best male and female student-athletes. The most prestigious college track and field award is billed as “the Heisman Trophy” of the sport.

“It means a lot,” Okolo said of her win. “It’s very important for us athletes to have something to honor us. I’m really blessed that they honored me with this award.”

Okolo earned her honor with a campaign that featured a 400-meter record and multiple NCAA championships. She broke her own mark in the 400 meters in her outdoor debut this year by running a 49.71 at the LSU Alumni Gold in April. Okolo won the same event at the NCAA outdoor championships with a time of 50.36 seconds. In addition, she anchored the Longhorns’ 1600-meter relay to help Texas come from behind and claim victory at the NCAA championships.

Okolo defended her indoor NCAA title in the 400 as well, finishing in 50.69. She helped the Longhorns earn the victory in the 1600 relay as the team finished in 3:28.77. With Okolo on the relay team the Longhorns have posted four of the top seven 1600 relay times in NCAA history.

In addition, Okolo dominated the Big 12 conference, winning the 200 and 400 indoor titles. She set meet records in both events. Okolo took her third straight title in the outdoor 400 event and helped win the title on the 400 relay team. She’s the only woman to run a sub-51 in the 400 at the Big 12 meet, accomplishing that feat twice.

The trophy is named after Bill Bowerman, former coach of Oregon and co-founder of Nike. Created in 2009, the trophy is billed as the Heisman Trophy for track and field athletes. Members of the media, statisticians and college administrators vote on the winners.  An online fan vote accounts for one vote in the scoring.

Jarrion Lawson of Arkansas was honored as the male recipient of the award.

Since the award was created in 2009, past winners have combined to win nine Olympic medals. Three gold medals were earned by past winners in Rio over the summer.

Longhorns in the NBA: Through Dec. 15