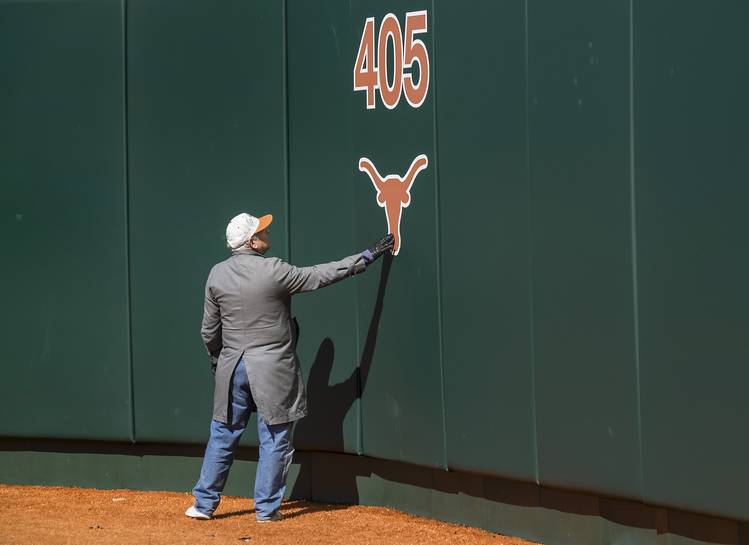 February 6, 2016 - Bill Nelson, of Austin, wearing a commemorative "1428" hat, autographed by Texas baseball head coach Augie Garrido, touches outfield wall as he gets to walk around the outfield during the annual Fan Appreciation Day and Alumni Game held at UFCU Disch-Falk Field in Austin, Texas, on Saturday, Feb. 6, 2016. Nelson, a Longhorns baseball fan since 1968, traveled to Tallahasee, Florida, in 2003 to watch coach Garrido break the NCAA Division I winning record of 1,428 wins. RODOLFO GONZALEZ / AUSTIN AMERICAN-STATESMAN

In a move that would please run-starved Texas fans, new Longhorns baseball coach David Pierce says he wants to bring in the fences at UFCU Disch-Falk Field.

It won’t happen this year, but Pierce told reporters on Wednesday that shortening the playing field is being discussed by himself and his administration. The way it is, from home plate the left field fence is 340 feet and center field 400 feet. The power alleys are cavernous, extending to 405 (left field) and 375 feet.

For years, fans and players have lamented the dimensions and the low-scoring games they produce. If Pierce has his way, that’ll soon change.

“Seems to be something that could potentially be needed,” Pierce said. “It isn’t so much the playability as much as it is a part of the game that we’re missing a little bit and that’s the three-run home run at the end of the game. It’s a fan favorite. We don’t want to lose fans because of lack of offense. I think you’ll see we’ll be a very aggressive offense anyhow. We’ve been that everywhere we’ve been. It will be something we consider and it’s in discussions whether or not we do it.”

Among immediate changes, Pierce said the turf at the Disch will be replaced after the fall season to show a larger Longhorn logo in center field. Additionally, accents around the bases will change to brown because Pierce thinks the burnt orange turf looks closer to a true orange.

Also, Pierce said there are discussions about building a climate-controlled indoor training facility near the right field line that would include hitting cages and a pitching laboratory. If approved, construction would likely begin after next season.