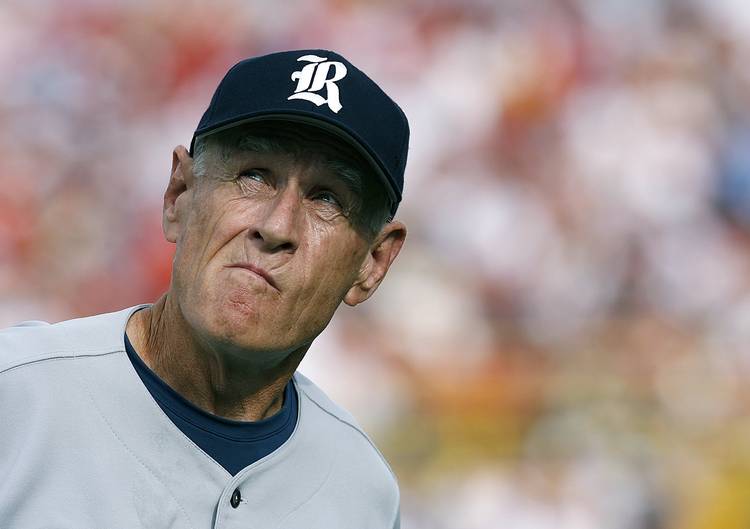 Head coach Wayne Graham #37 of the Rice Owls looks off into the sky during their 7-4 loss to the North Carolina Tar Heels in Game 13 of the NCAA College World Series at Rosenblatt Stadium on June 21, 2007 in Omaha, Nebraska. (Photo by Kevin C. Cox/Getty Images)

Graham, 82, led Rice to 23 NCAA postseasons in his 27 seasons and a national championship in 2003, eliminating defending national champion Texas along the way. But he was told by Rice AD Joe Karlgaard that his contract wouldn’t be renewed after this season.

Kirk Bohls asked him Sunday night if he was going to join Pierce’s staff. “No,” Graham smiled, “they have enough coaches.”

Pierce worked for Graham in 1991 and again from 2003-2011, mostly as a pitching coach on staffs that included included Wade Townsend, Joe Savery, Jeff Niemann, David Aardsma and Philip Humber. All but Townsend — my favorite Dripping Springs athlete — went on to play in the majors. Before that, he coached MLB greats Roger Clemens and Andy Pettitte at San Jacinto College.

For the rest of Cedric’s Nuggets, including his thoughts on Vince Young being on the College Football Hall of Fame ballot and the NBA Finals, click here.