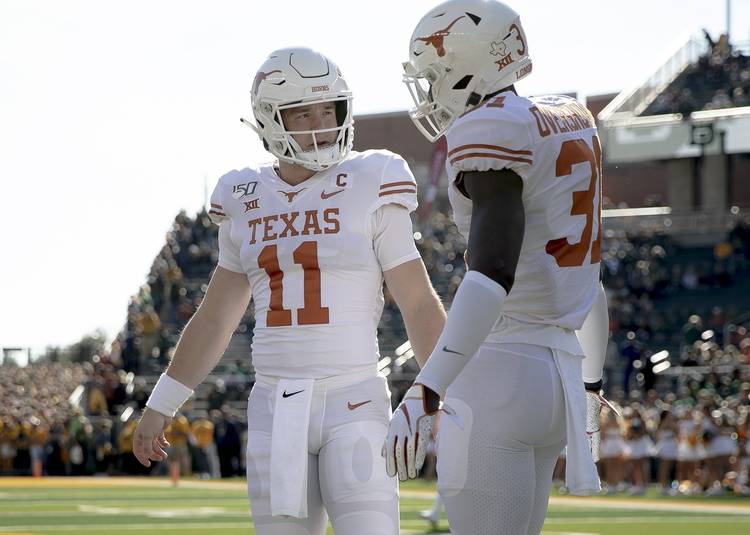 Texas quarterback Sam Ehlinger (11) talks with defensive back DeMarvion Overshown (31) before a game against Baylor on Nov. 23, 2019 in Waco. [NICK WAGNER/AMERICAN-STATESMAN]

Overshown tweeted on Thursday that it “Feels good to be back in my element.” A UT spokesperson confirmed that Overshown is participating in the team’s strength and conditioning program. This is the first week this summer that attendance at the football program’s workouts has been required instead of voluntary.

Feels good to be back in my element🖤

On July 2, Overshown announced that he would not take part in any team activities. While explaining his decision, Overshown said he was not pleased with the administration’s pace in addressing concerns that a number of student-athletes had made about racial issues on the Texas campus. Overshown said that “I can not continue to perform for a program that doesn’t show me the same love and support I do for them.”

This Monday, Texas did deliver its response to those concerns. The school pledged a series of changes that included the renaming of Robert Lee Moore Hall and an investment into the recruitment of Black students.

After the university’s announcement, Overshown teased at his return. While quote-tweeting a statement from the university, Overshown tweeted “We Are One!” The declaration of Overshown’s personal protest had been labeled “Until We Are One.”

Overshown, who is entering his junior year, was recruited to UT as a four-star defensive back. He will likely be used as a linebacker during the 2020 season. In 17 career games, Overshown has recorded four pass deflections, two sacks and an interception.

Longhorn Confidential: Who is Texas’ biggest rival in recruiting?