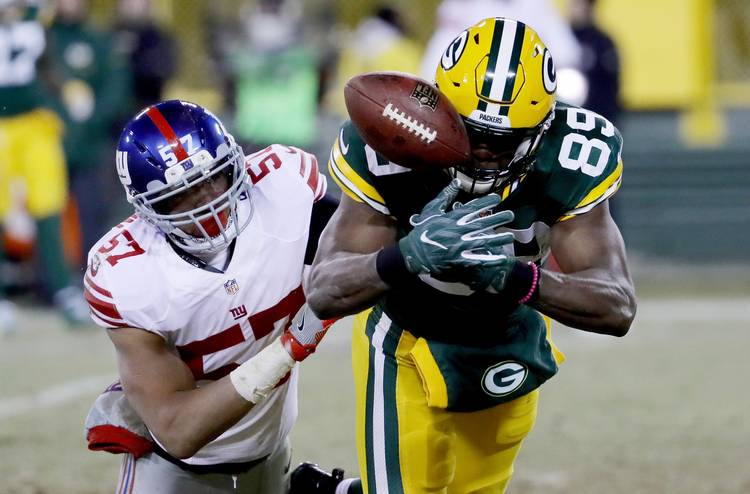 Jared Cook #89 of the Green Bay Packers fails to make a catch while being guarded by Keenan Robinson #57 of the New York Giants in the second quarter during the NFC Wild Card game at Lambeau Field on January 8, 2017 in Green Bay, Wisconsin. (Photo by Jonathan Daniel/Getty Images)

Is there such a thing as a former Longhorn? These players will always be Longhorns to University of Texas fans, even though they’ve graduated to the next level of football. Every week we’ll update you on how they performed the previous weekend. Here’s a look at the Longhorns in the NFL playoffs and how they fared in the Wild-Card round.

Keenan Robinson, LB, N.Y. Giants—Robinson made six tackles, third-most on the team, and had a pass defensed and a tackle for loss as the Giants fell 38-13 to the Packers. The 27-year-old had a good season and is an unrestricted free agent entering 2017.

Malcom Brown, DT, New England—Brown and the Patriots earned a first-round bye and are set to take on the Houston Texans Saturday at 7:15 p.m. in Foxboro. Brown had entered Bill Belichick’s doghouse but the second-year tackle will most definitely have a role in limiting the Texans’ rushing attack.

Earl Thomas, S, Seattle—He’s out for the season, but his Seahawks managed a 26-6 win over the Lions to advance to the divisional round of the playoffs. Thomas cracked his tibia on a play in the second quarter of Week 13’s win over the Panthers. After previously tweeting that he was contemplating retirement, Thomas put fans at ease when he tweeted on Christmas eve that he would return next season.

Jamaal Charles, RB, Kansas City—Charles was placed on injured reserve. He could have been activated in Week 17, but after the Chiefs activated Justin March-Lillard on Dec. 22 that move was off the table.  He won’t be available for the playoffs. He finishes the disappointing season having played in just three contests, rushing 12 times for 40 yards and a touchdown.

Derrick Johnson, LB, Kansas City—Johnson ruptured his Achilles for the second time in three years in the 21-13 win over the Raiders in Week 14. He finished the season with 90 tackles, a sack and a 55-yard interception returned for a touchdown. The Chiefs had a first-round bye and will host the Steelers at 12:05 p.m. on Sunday.

Quandre Diggs, CB, Detroit—Diggs was lost for the season in Week 13 due to a pectoral injury. Despite playing in four fewer games than his rookie season, he had six more tackles (44) for a new career high. His Lions bowed out of the playoffs, falling to the Seahawks 26-6 in the Wild-Card round.

Geoff Swaim, TE, Dallas—Swaim suffered a torn pectoral muscle in Week 10. His season is over as his recovery time will be about four months. He made six catches for 69 yards, including three first downs this season. The Cowboys will rely on Jason Witten and Gavin Escobar for their tight end production as they host the Packers on Sunday at 3:40 p.m.

Mykkele Thompson, S, N.Y. Giants—He injured his knee in Week 2 and was placed on injured reserve. He was on the verge of making a return to the field in early December, but the return of Shane Vereen dashed hopes Thompson had of being removed from the IR.