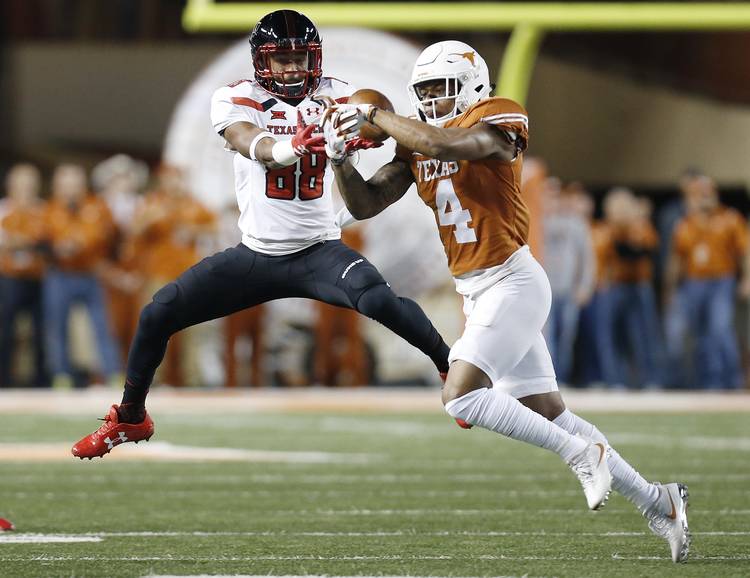 Texas defensive back DeShon Elliott (4) breaks up a pass to Texas Tech wide receiver Ja'Deion High (88) in the first half of a Big 12 Conference football game at Royal-Memorial Stadium, Friday, Nov. 24, 2017. (Stephen Spillman / for American-Statesman)

ATLANTA — If any college football fan thinks leaving school early and going pro is an easy decision, they should’ve seen DeShon Elliott and Michael Dickson explain themselves on Wednesday.

It’s a nerve-wracking decision with real-life consequences. Both Longhorns, who could win national honors on Thursday at the College Football Awards, are treating it as such.

Elliott is banking on himself. The junior safety had his best season as a Longhorn this year, snagging six interceptions and returning two for touchdowns. “The Joker” blossomed into UT’s first Jim Thorpe Award finalist since 2009.

Elliott said he’s already signed with agent Jeff Nalley of Select Sports Group. He believes he’ll be drafted no lower than the third round. Elliott won’t play in the bowl game, and at this point, there’s no turning back.

“I knew I was built for success because God put it in my plans and put it in my head,” Elliott said. “I just kept praying on it, but I never thought I would be this far and ready this early.

“I’m ready to go pursue my dreams,” he added. “Completely honest, I feel like I can go to the next level and be successful.”

As for a personal highlight, Elliott said he’s most proud of the fourth-down pass break-up he made in the end zone at West Virginia.

“First of all, I didn’t even know it was fourth down,” Elliott said with a huge smile. “I was reading the quarterback’s eyes and thought, ‘OK, I’ve got to get over there and just swat it away.’ Really I could have caught it with one hand, but I was in panic mode.

Dickson, a two-time Ray Guy Award finalist, is just as confident but far more anxious. Punters do get drafted, but where is a total wildcard. It all comes down to how much value NFL general managers place on the position.

Dickson had a terrific year, one of the best in UT history. The Australian-born junior led the nation in average (48.4) and broke his own school record in the process. Six punts against Oklahoma State went 50 yards or more. Dickson also launched a missile, practically into outer space, against TCU for a career-long 76 yards.

Dickson will play in the upcoming Texas Bowl, but it’s clear he isn’t sure about returning to Texas for one final season.

“I’m still thinking about it every day. It’s kind of dominating my thoughts at the moment,” he said.

“I remember when I came in on my official visit and they asked me where I wanted to go with punting, and I said I wanted to go to the NFL,” he said. “That was always the end goal. But I always set little goals in between — get this average, do this, be the best in the Big 12. If I could eventually be there, my goal is to stay there 10 years if I want.”

Don’t forget my number: Oklahoma quarterback Baker Mayfield drew a huge throng of Georgia reporters who were anxious to ask the Heisman contender about the upcoming Rose Bowl. Mostly they wanted to know why Mayfield changed his phone number.

Mayfield said he was in Springdale, Ark., to receive the Burlsworth Trophy, and his phone just blew up. Turns out, his phone number had been posted on the Internet.

“I had been getting some numbers from Georgia numbers and suspected that somebody had given it out,” Mayfield said. “They called so much that it died. I realized that something was going on. When I got my phone charged back on, I had guys send me screenshots that it was posted online.”

Asked if Georgia fans were creative, Mayfield said, “There was a couple that were pretty good. Some people asked me if I had done my homework yet. I guess they were concerned about my academics. I appreciate that.”